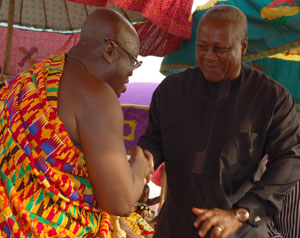 Today is election day in Ghana, both for President and Parliament. My phone has been hot all day with calls from around that country, and it seems strange to be following from a snowy Ramsgate.

I am in the curious position of being a good personal friend of both the main Presidential candidates, Nana Akuffo Addo and John Mahama. As you can see from the photograph above, they are fairly good friends themselves. I was actually there in Kyebi when that photo was taken a year ago. John was there for the Odwiratuo festival as Vice President, Nana was present as a member of the Akyim royal family, and I was there as a guest of the Okyenhene. In yet another example of the appalling slip in BBC standards, they today report wrongly that Nana is an Ashanti!

Both John and Nana are two of the nicest, best motivated and most “normal” people ever to be involved in high politics. They are both particularly kind individuals. It says something about Ghana that two such pleasant men are contesting for President. By contrast, politics in western countries seems to necessitate a degree of sociopathic ruthlessness that is entirely absent from both men.

I find myself thinking less about who will win, than being concerned for whichever of my friends loses. Ghana’s genuinely democratic elections have all come down right to the wire, and last time there was a tiny majority for the NDC – Nana lost by only about 20,000 votes across the entire country, after being just ahead but below 50% in the first round.

Nana is not getting younger and whether he will get another chance if he does not win this time remains to be seen – though the late President Mills won the last Presidential election after two successive defeats. John Mahama’s position in the NDC is also not automatically secure should he lose, having been promoted from Vice President to President on the demise of President Mills, but having had only a few months to consolidate the affections not just of the Ghanaian people but of his own party.

Whichever of my friends loses cannot therefore be certain of getting another chance in 2012, though I very much hope they will.

I was absolutely appalled by the standards of the Ghanaian media in the last election. There was no debate on policy, but merely unceasing stories about the candidates’ private lives and health. Thankfully this year has been a bit better, with Nana’s promise of free senior high school education breaking new ground in introducing real policy discussion into the election. John’s commendable agreement to participate in the televised debates was also a breakthrough, and the inclusion of the “minor” candidates with full rights in those debates shamed western “democracies”.

One unfortunate feature of modern western democracies has however been reflected in recent Ghanaian politics. The theoretical right/left split between the NPP and NDC appears not to reflect much in real policy difference. I expect the NDC would have done rather better had they tried harder to regain their role as the representative of the poorer sections of society. Rent control is an urgent necessity for the urban poor as property prices boom with oil development, but nobody wants to take on the World Bank over the issue.

We can expect a swing to Mahama in his native north, with probably the NDC holding on to some of 2008’s gains in the West. But the Presidential election will really be decided in the huge urban constituencies of Accra and Tema, with the Ga vote likely to be decisive. Peculiarly the Ga are virtually never mentioned by political commentators.

From 2000 to 2008 Ghana enjoyed a golden period of economic growth under John Kuffour, which propelled them to the front of the first rank of African economies. However pre-election fiscal looseness by the NPP in 2007-2008 coincided with the global economic crash. The NDC inherited a large deficit and debt problem. Kwabena Duffour, the Finance Minister, has done an extremely good job of keeping economic growth going while repairing the budget deficit. Kwabena is worth six of George Osborne any day.

But the deficit remedy medicine did require a reining back of government infrastructure spending, and this will hurt the NDC; Ghanaian voters do like to see something tangible for their money. There was a real sense in which 2008 was a good election to lose, as the winner was constrained from doing popular things.

By contrast, 2012 is a great election to win; as the booming of the economy accelerates towards double figure growth and oil revenue starts to flow through properly. Whoever wins this election will have the opportunity to undertake projects that will make a real mark in Ghanaian development, and ought to be well placed to win a second term.

Ghana will be in extremely good hands in 2013-17 whatever the outcome. I cannot feel either John or Nana deserves to lose, and my thoughts will be with the loser, much as I shall congratulate the winner. Remember, politicans are people, too. If you cut them, do they not bleed?

32 thoughts on “Election Day in Ghana”