Skip to content
Home » Posts » Uncategorized » The Circle of Amnesiacs

Today was a particularly interesting meeting of the Holyrood Inquiry into the mishandling of the Salmond affair, with two senior civil servants, Judith Mackinnon and Barbara Allison, who both had very convenient and complete failures of memory, about key points which just happened to be the very points on which the committee had previously been lied to.

To take Barbara Allison first, she had been happily on holiday in Mauritius. I am sure it is of great comfort to the ordinary people of Scotland that, as has been clear from this inquiry, the Scottish Government employs an extraordinary plethora of officials, nearly all of them female, in non-jobs with silly titles at salaries that enable them to spend their vacations at the most expensive and exclusive spots on the planet.

Now Ms Allison, Director of Communications, had forgotten that, on the day Alex Salmond won the judicial review case against the Scottish Government, she had immediately texted from Mauritius to Permanent Secretary Leslie Evans, and that Leslie Evans had instantly replied “Battle may be lost but not the war.” She denied it had happened under oath to the committee when she gave evidence on 15 September 2020. She only remembered it when the Crown Office subsequently handed over the text – which police Scotland had taken from her own phone – to the Committee. She then was forced to write to the Committee correcting her evidence, which if the text had never been produced, presumably she would never have done. 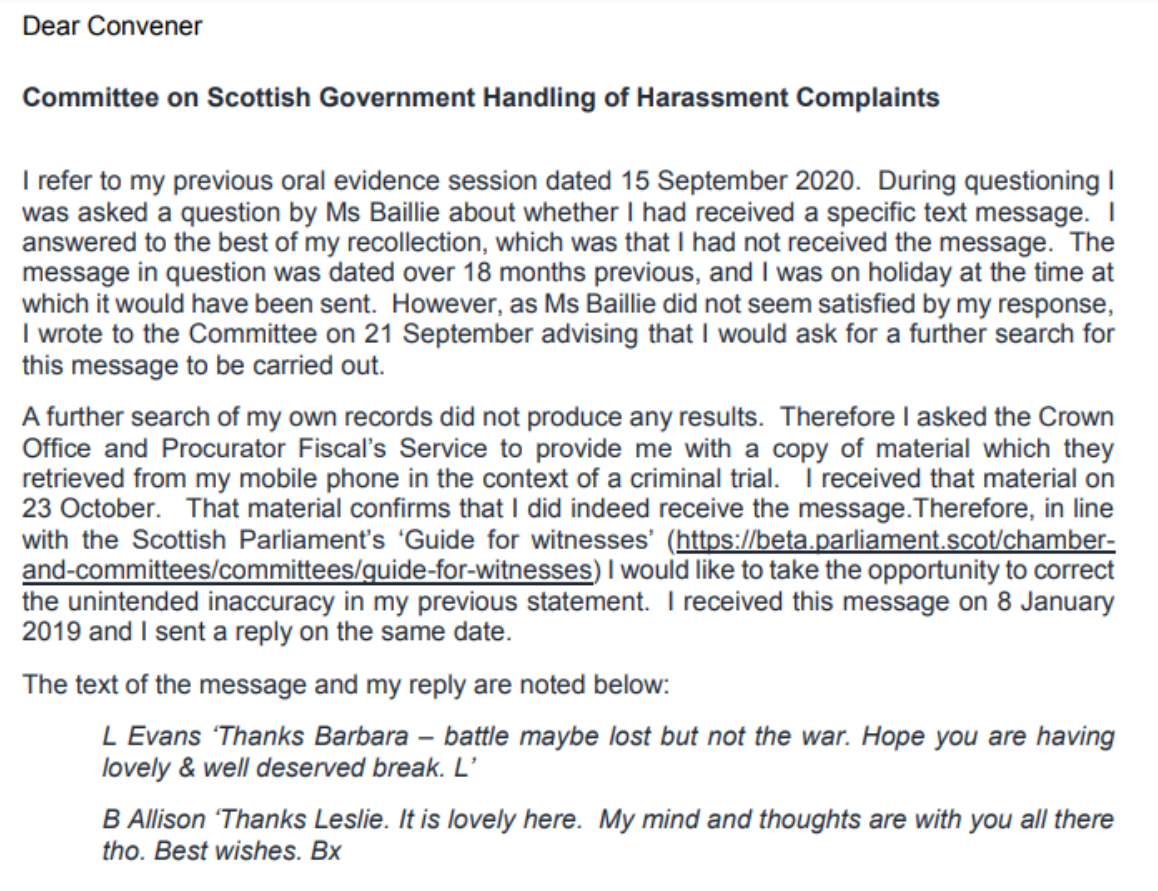 The remarkable thing is, that Leslie Evans’ message had been famous ever since the Alex Salmond trial. It had featured quite literally scores of times in the media after being mentioned in the evidence at Alex Salmond’s preliminary hearing (where it was among the evidence the defence were banned from using at trial) and after being quoted from the steps of the court room by Alex Salmond after his complete acquittal. It is the subject of this column by Iain Macwhirter, for example, and features in the title. Presumably as part of her job Ms Allison must have followed all this, but none of it jogged her memory that she had received the message. Even when Leslie Evans gave evidence to the Inquiry on 8 September that she had sent the message, that did not remind Ms Allison that she had received the message before she explicitly denied, under oath, receiving it to the committee exactly one week later.

It is plain from the messages that Evans and Allison are close. Civil servants do not normally add kisses to work related texts. We are asked to believe that on 8 September Evans gave evidence on this text message to Allison, and did not mention it to Allison before her own appearance before the committee the following week. That is ludicrous.

Let us dig a bit further into that. Imagine you are in Mauritius on holiday. It is a wonderful place.

You are there on holiday. You are relaxing by the sea in the magnificent scenery and enjoying a drink or a meal. You receive immediate notification of the result of the Salmond civil case judicial review, thousands of miles away. How? It did not make the Mauritian or the international media. Plainly somebody has contacted you to give you the news instantly. Had you organised for that, or had someone thought it so important as to bother you on your holiday?

[As a former senior civil servant myself, I can tell you for certain that an event would have to be considered extremely significant, and requiring indispensable involvement of a particular civil servant, for them to be interrupted when away on a holiday. Plainly, this was not casual.]

Your tropical idyll has been interrupted. You then immediately initiate an exchange of texts with the Permanent Secretary. You now cannot – just eighteen months later – recall any of this happening at all.

I just do not buy it. I do not believe it. I do not accept it. It is my opinion (cf Dugdale vs Campbell libel case) that Barbara Allison gave a very strong impression that she is a liar.

The content of Barbara Allison’s text is of course very important, because of Leslie Evans’ wildly improbable explanation to the committee, that when she said “battle may be lost but not the war”, with reference to the judicial review case against Alex Salmond, the “war” to which she referred was not the war against Alex Salmond, but rather a wider struggle that government should have “equality at the heart of what it does”. In this (frankly unbelievable) context, the missing Barbara Allison text message becomes very important indeed.

Unfortunately, of course, Allison has (ahem) forgotten what her text message said. And here is the extraordinary thing – she had deleted that key message before she handed her phone over to the police. Now, she had not deleted her messages with one of the accusers from months earlier. Also she had not deleted the reply from Lesley Evans to her deleted text, nor had she deleted her reply to Lesley Evans’ reply to her missing text. We are left with this:

Text X – deleted
“Thanks Barbara. Battle maybe lost but not the war. Hope you are having lovely and well deserved break. L”
“Thanks Lesley. It is lovely here. My mind and thoughts are with you all there tho. Best wishes B. x ”

Now why did text X get deleted and not the other two? Allison told the committee that she routinely deletes texts to unclutter her phone.

Is that not rather strange? We all know how text messages work – your phone shows you the most recent message in a conversation first. So scrolling back, Allison decided to keep the last two but to delete the third one back? Why that one? Why not the whole exchange? It is very hard to think of any logical explanation for that selection – unless the deleted text happened to say something like “God that bastard won. We have to nail him”, which might be incriminating given the subsequent (ahem) organisation of complainants for the criminal case. But as Allison cannot remember writing or deleting that text message, we may never know.

Except of course, we should know. Police Scotland took the messages from the phone to give to the Crown Office. Unfortunately the interest of Police Scotland was in conspiring with Peter Murrell to fit up Alex Salmond. Had they not been otherwise fixed on a corrupt intent, Police Scotland would have been able to deploy their resources to recover the obviously missing deleted text, either from the iPhone or from the service provider.

Let us leave the unpleasant Ms Allison to stew in her own mendacity, and move on to another unreliable witness with a very poor memory, Judith McKinnon. Now I have to refer here to an earlier witness, civil servant Mr James Hynd, who had evidently been selected to take upon himself the responsibility for having devised a procedure to investigate ex-ministers. He had testified it was entirely his own idea, that he had never discussed it with anybody at all, and that it had first existed in a draft policy he had alone written.

Unfortunately this attempt to sanitise the genesis of the “get Salmond” policy quickly collapsed as documents have slowly been squeezed out of the Scottish government showing that a procedure against ex-ministers had been discussed by civil servants and special advisers before Hynd “first” thought of it, including by Judith McKinnon, who had gone on to coach the initial complainants against Alex Salmond. In fact, Mckinnon had produced a “flowchart” of the new procedure including ex-ministers, dated before Hynd’s document which he claimed was the first time the idea had been thought of. Hynd was another one forced to write to the committee to “clarify” his evidence under oath.

Now there is a shock.

Scotland employs, on very high salaries, a quite fascinating number of women with very poor memories.

The members of the committee were most excited about another point. They questioned both women on the fact that the new procedure which the court had found unlawful and tainted by apparent bias, under which McKinnon could both coach complainants and be the investigating officer, was still in place. There was, huffed Alex Cole Hamilton, the possibility the same mistake could be made again and the taxpayer again lose a great deal of money.

Silly Mr Cole Hamilton. He has not yet understood that the “new procedure” was only ever a single shot, designed to “get” Alex Salmond. There was never any chance it would be used against anybody else. So why bother to amend it now?

Finally and perhaps even more interestingly, today a letter has been released which Alex Salmond wrote to James Hamilton, who is conducting the investigation into whether Nicola Sturgeon broke the ministerial code. This entire letter is well worth reading, but this bit is truly stunning. Alex Salmond points out that Hamilton’s remit was written by Sturgeon’s deputy John Swinney, and he suggests it is a “straw man”, deliberately misdirecting Hamilton to areas where Sturgeon probably did not break the ministerial code. 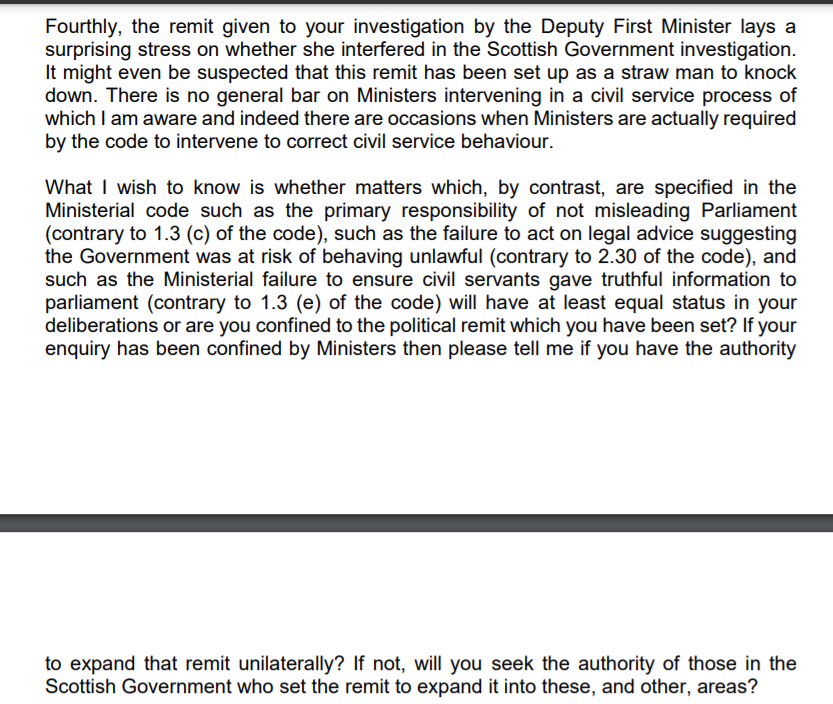 Salmond instead suggests other areas where Sturgeon did actually break the ministerial code, and asks Hamilton if he is able to investigate them or just carrying out the Swinney defined charade. This is the first direct and public attack by Alex on Nicola since she conspired to have him jailed, and it is extremely significant. I am hopeful it may be the starting point of a change towards a Scottish government that will actually use its popular mandate to act on Independence.

UPDATE I have been informed it wasn’t Mauritius, it was the Maldives. Which is, of course, even more spectacularly exclusive and expensive.

161 thoughts on “The Circle of Amnesiacs”