Skip to content
Home » Posts » Uncategorized » The Truth About Chilcot

The death toll from the horrific recent Iraq bombings has risen over 250. If Blair had not been absolutely determined to attack Iraq on the basis of a knowing lie about WMD, they would be alive now, along with millions of other dead. ISIS would never have taken control of territory in Iraq and Syria. Al Qaeda would never have grown from an organisation of a few hundred to one of tens of thousands. We would not have a completely destabilised Middle East and a massive refugee crisis.

Do not expect a full truth and a full accounting from the Chilcot panel of establishment trusties today. Remember who they are. 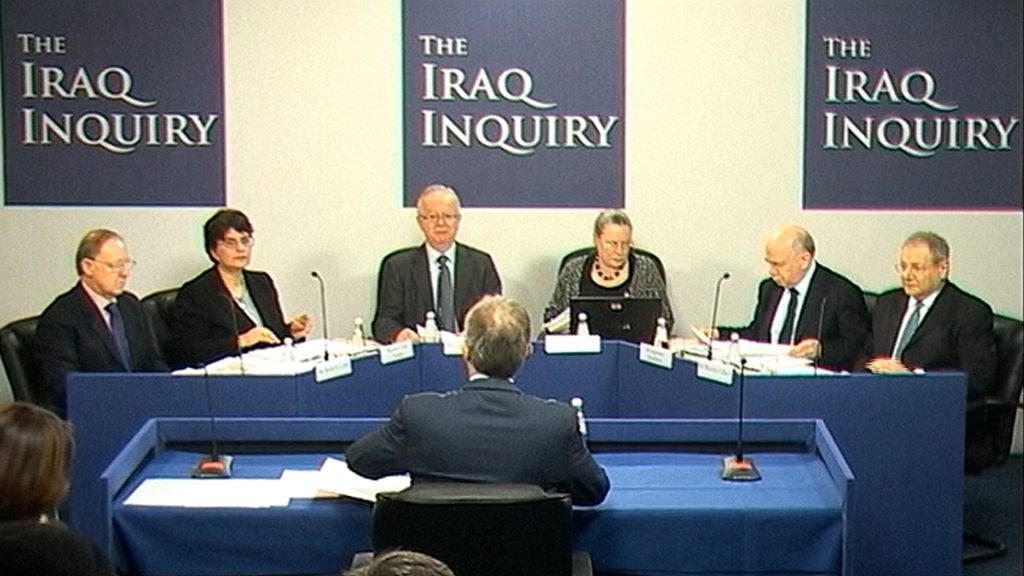 Member of the Butler Inquiry which whitewashed the fabrication of evidence of Iraqi WMD. The fact is that, beyond doubt, the FCO and SIS knew there were no Iraqi WMD. In the early 1990’s I had headed the FCO Section of the Embargo Surveillance Centre, tasked with monitoring and preventing Iraqi attempts at weapons procurement. In 2002 I was on a course for newly appointed Ambassadors alongside Bill Patey, who was Head of the FCO Department dealing with Iraq. Bill is a fellow Dundee University graduate and is one of the witnesses before the Iraq Inquiry this morning. I suggested to him that the stories we were spreading about Iraqi WMD could not be true. He laughed and said “Of course not Craig, it’s bollocks”. I had too many other conversations to mention over the next few months, with FCO colleagues who knew the WMD scare to be false.

Yet Chilcot was party to a Butler Inquiry conclusion that the Iraqi WMD scare was an “Honest mistake”. That a man involved on a notorious whitewash is assuring us that this will not be one, is bullshit.

A good friend and former jogging partner of Alastair Campbell.

Last time I actually spoke to him we were both Ambassadors and on a British frigate moored on the Neva in St Petersburg. Colleagues may have many words to describe Rod Lyne, some of them complimentary, but “open-minded” is not one of them.

If the Committee were to feel that the Iraq War was a war crime, then Rod Lyne would be accusing himself. As Ambassador to Moscow he was active in trying to mitigate Russian opposition to the War. He personally outlined to the Russian foreign minister the lies on Iraqi WMD. There was never the slightest private indication that Lyne had any misgivings about the war.

From Uzbekistan we always copied Moscow in on our reporting telegrams, for obvious reasons. Lyne responded to my telegrams protesting at the CIA’s use of intelligence from the Uzbek torture chambers, by requesting not to be sent such telegrams.

Lawrence Freedman is the most appalling choice of all. The patron saint of “Justified” wars of aggression, and exponent of “Wars of Choice” and “Humanitarian Intervention”. He is 100% parti pris.

Here is part of his evidence to the House of Lords Select Committee on the Constitution on 18 January 2006:

The basic idea here is that our armed forces prepared for what we might call wars of necessity, that the country was under an existential threat so if you did not respond to that threat then in some very basic way our vital interests, our way of life, would be threatened, and when you are looking at certain such situations, these are great national occasions. The difficulty we are now facing with wars of choice is that these are discretionary and the government is weighing a number of factors against each other. I mentioned Sierra Leone but Rwanda passed us by, which many people would think was an occasion when it would have been worth getting involved. There was Sudan and a lot of things have been said about Darfur but not much has happened…

…Iraq was a very unusual situation where it was not an ongoing conflict. If we had waited things would not have been that much different in two or three months’ time and so, instead of responding either to aggression by somebody else, as with the Falklands, or to developing humanitarian distress, as in the Balkans, we decided that security considerations for the future demanded immediate action.”

Very right wing historian whose biography of Churchill focussed on Gilbert’s relish for war and was otherwise dull. (Roy Jenkins’ Churchill biography is infinitely better). Gilbert was not only rabidly pro-Iraq War, he actually saw Blair as Churchill.

Although it can easily be argued that George W Bush and Tony Blair face a far lesser challenge than Roosevelt and Churchill did – that the war on terror is not a third world war – they may well, with the passage of time and the opening of the archives, join the ranks of Roosevelt and Churchill. Their societies are too divided today to deliver a calm judgment, and many of their achievements may be in the future: when Iraq has a stable democracy, with al-Qaeda neutralised, and when Israel and the Palestinian Authority are independent democracies, living side by side in constructive economic cooperation.

A governor of the FCO institution the Ditchley Foundation – of which the Director is Sir Jeremy Greenstock, the UK Ambassador to the UN who presented the lies about Iraqi WMD and was intimately involved in the lead in to war. So very much another cosy foreign policy insider.

So, in short, the committee – all hand-picked by Gordon Brown – could not have been better picked to ensure a whitewash.

Over 50% of the British population were against the Iraq War, including for example many scores of distinguished ex-Ambassadors, many military men and many academics. Yet Brown chose nobody on the Inquiry who had been against the Iraq War, while three out of five were active and open supporters of the war.

Do not expect to see this truth reflected in any of the mainstream media coverage.

145 thoughts on “The Truth About Chilcot”