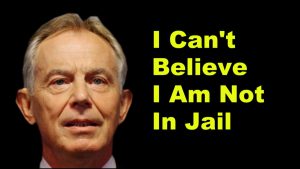 There is no requirement in international law for the appropriate jurisdiction of a tribunal – or even the tribunal itself – to be in place before a crime is committed, in order for it to try that crime. The most obvious evidence of this is the Nuremburg Tribunal, which did not even exist when the crimes which it tried were committed. But in fact international law has a long tradition of arbitration or judgement by bodies which were set up after the event, but judging by the law applicable at the time of the event. It is the crime itself which must be a crime at the time it is committed. The jurisdiction of the body which tries the criminal can be created after the crime itself.

Total nonsense has been written widely that it would be retroactive law, and thus unacceptable, for Tony Blair to be tried at the Hague for the crime of waging aggressive war. But the crime itself was very plainly already in existence when Blair committed it.

Indeed, Blair apologists claim that the Statute of Rome of 1998, which set up the International Criminal Court, means that Blair cannot face trial because it specifically exempts aggressive war from the jurisdiction of the court. But in fact that is the opposite of the truth. The Statute of Rome unequivocally confirms the existence of the crime of waging aggressive war. It states that the tribunal “shall not exercise jurisdiction over the crime of aggression”. That is in itself sufficient evidence that the international community reconfirmed the existence of the crime of aggression in 1998, shortly before Blair committed it in 2003.

It just means that at present the crime has to be prosecuted somewhere else. The FCO’s Legal Advisers, a department of extremely able professional international lawyers, unanimously believed the invasion of Iraq was an act of aggressive war, as plainly told to Chilcot by their then Head Sir Michael Wood.

If the Hague tribunal obtains, as expected, power to cover this crime, there is no reason in principle why it should not investigate such crimes which were committed before it had that jurisdiction. Except that we can be sure that the British government will ensure there is a clause in the agreement forbidding that. Then there is the fact that Blair is not a black African and has never been bombed by NATO. Nobody who fails to meet those criteria will ever be tried at the Hague.

Blair is a war criminal. He can be tried by n international tribunal, or he can, more satisfactory still, be tried in the UK. The attempts of his defenders to claim it is impossible technically to try him gives some sign how desperate they have become. Aggressive war was a crime at the time he committed it.

Tomorrow the Chilcot whitewash will be liberally splashed around. I do strongly recommend that you buy and read Peter Oborne’s Not the Chilcot Report to get the real picture.

123 thoughts on “Blair Can Be Tried For War Crimes”