Mike Barson, keyboard player of the great ska group Madness, had his Wikipedia entry amended by “Philip Cross” to delete his membership of Momentum and interview with The Canary. 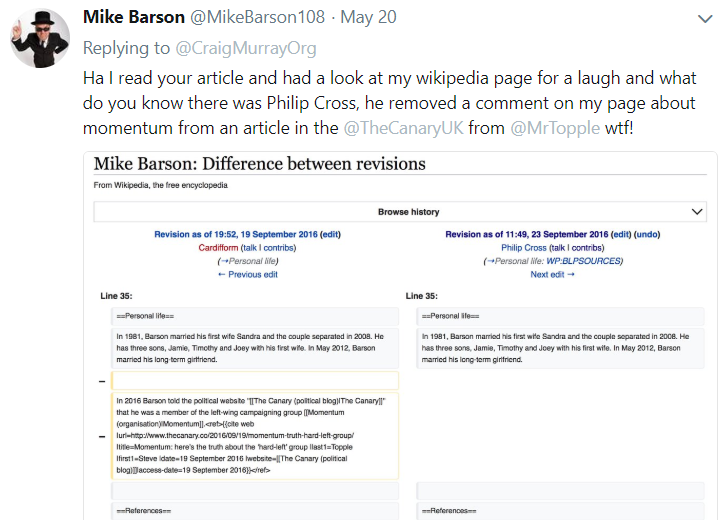 This apparently trivial incident raises an important question. How does the “Philip Cross” Wikipedia monitoring operation work? “Cross”‘s systematic attack on Momentum and The Canary is a matter of record, and his twitter feed proves it is motivated by a visceral hatred of the anti-war movement. But how would “Cross” discover that a reference to Momentum had turned up somewhere as improbable as the page of a member of Madness?

To get this by Google just would not work – try it yourself if you don’t know it relates to Barson, to Madness, or anything about them. To do a daily Wikipedia site specific Google search for the word Momentum might get you there after hours of effort. Are there tools within Wikipedia itself that could alert “Cross” to this sort of reference being added anywhere on Wikipedia, and if so are they available to the general public?

A number of people have opined in reply to my posts that the time spent to make all of Cross’s daily edits, as per the number of keystrokes, is not great. That ignores the colossal effort that goes into research and above all monitoring of Wikipedia by the “Philip Cross” operation.

Finally, this is an excellent example of the bias of Wikipedia. The information about Barson is totally true. He is a proud member of Momentum. It is also quite interesting and an important bit of his life. But according to Wikipedia’s pro-MSM rules, “Philip Cross” can indeed delete it because the information is not from an MSM source. In the unlikely event of the Times or Telegraph ever writing about Barson’s Momentum membership, it would of course be in a hostile attack to which “Philip Cross” could then link.

I hope you are understanding the Jimmy Wales methodology by now.

So, to add to the mysteries of how “Philip Cross” works every waking hour, never takes a single day off and is followed on Twitter by few people but including half of Fleet Street, we can add the mystery of how he has omniscience of left wing references appearing in unlikely places on Wikipedia. Go figure.