Skip to content
Home » Posts » Uncategorized » Of Coronavirus and Chartism

I am cheerfully optimistic that this Coronavirus, like asian swine flu and SARS before it, will prove not to be as deadly as may be prognosticated by journalists wanting to fill column inches. One day the human race will become extinct; but it is unlikely to be a virus that does it, as wiping out your host is not a clever survival policy for a virus. Even a disease as vicious as ebola proved not to be so potent against subjects who were not malnourished nor struggling with other health issues. So far this coronavirus seems to have a mortality rate of about 3%, which is probably an over high estimate as it is only a percentage of those who died after testing, whereas it appears there are large numbers with milder symptoms who are unlikely to have been tested in the first place. So coronavirus is not looking vastly different to ordinary influenza, which has a mortality rate of about 1%.

When you or I get flu we don’t normally panic as though we have a 1% chance of dying from it. That is again because we are well nourished, live in good conditions and have not been much weakened by other disease. Like this coronavirus, influenza generally carries off the old and frail. Whether the infamous Spanish flu after the First World War that killed so many was a particularly potent strain is open to doubt. A more powerful factor is probably that the population it wracked was suffering greatly from malnourishment, stress and disease already as a result of the war. But unlike this coronavirus, that one did attack children badly.

Which is not to say the current coronavirus might not yet mutate into something much more lethal, but as yet there is no sign of that happening.

I was educated both at school and university very much in the liberal tradition of history. At both levels, the curriculum featured a view of historic political development very much as “progress”. The “years of revolution”, 1830 and 1848, were landmarks in this, where liberal and national movements made some progress against monarchist autocracy across the whole of Europe. These political waves of convulsion on a continent wide basis undoubtedly happened, and in the UK resulted in the Great Reform Act and the Chartist Movement. They were taught in the Macaulay/Trevelyan historical tradition as very much the product of development in thought, as a product of political philosophy, as though the masses were moved by the elegantly turned phrases of a Benthamite pamphlet.

At university, I did add to this the knowledge that poor harvests had helped precipitate events, and indeed those had featured in my A level lists of “Causes of the French Revolution”. But it was only really a few years ago, when I was researching Sikunder Burnes, that I came to focus properly on the role of epidemiology in these human convulsions. Both the 1830 and 1848 European wave of revolutions coincided with the first and second ever cholera pandemics sweeping across Europe. The reason I came across this while studying Burnes is precisely that it was the opening up of Central Asia to trade in this period, largely through Russian exploration and expansion, that brought the disease into Europe. Burnes was in 1832 in a Bokhara ravaged for years by cholera. Its great canals – which are still there – were only being opened to fresh water once a month, and they served as both water supply and sewer, as Burnes documented in detail.

Without the misery inflicted by cholera, both directly and in economic impact, the desperate urban mobs may not have existed which enabled middle class liberals – and their own auto-didactic leadership – to start the establishment of western European democracy. It seems a very strange thing to suggest that cholera pandemics forwarded social progress. But there you are. I am now proceeding to an audacious discussion as to whether a lack of effective pandemics may retard social progress. Hang on to your hats.

[As a complete aside, I also discovered while researching Alexander Burnes that the great British liberal historical tradition was founded on a truly remarkable incestuous household menage a trois between Macaulay, his sister and Charles Trevelyan, father of the historian George who may well have been Macaulay’s son and nephew, rather than the official version of just nephew, and that Macaulay had also been having sex with his other sister. So much for Victorian respectability. Sikunder Burnes is a difficult book to describe because it presents an extremely detailed and painstaking account of the life of a 19th century British imperial functionary, and then from that framework sprout all kinds of exegeses on my wider intellectual interests. I hope it reads better than that sounds].

I do hope that I am right that coronavirus will prove, like SARS, not a great threat to us. The ability of modern nutrition, living conditions and medicine to ward off serious risk of epidemic and other illness has of course resulted in a very significant increase in human longevity. The relentless increase in longevity has slowed slightly as a result of the post 2008 economic crash, but I expect it to pick up again as it is a centuries old trend. In the UK, much has been written about the economic effects of this. In the UK, the concentration of wealth in the hands of old people who are not dying and passing it down, coincides with economic changes which have made it very difficult for young people to have good secure employment and to accumulate wealth, particularly property. 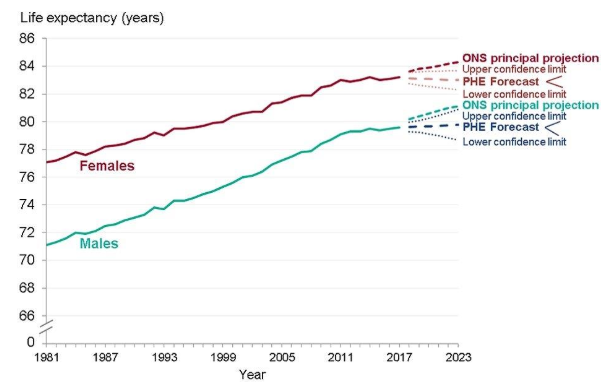 At the same time, the old people may own wealth but do not much generate it. With the increasingly aged demographic profile boosted by both people living longer and by historic falling birth rates, the percentage of the population in employment is in decline. The Office of National Statistics projects that while in 2007 there were 244 pensioners for every 1000 adults of working age, by 2041 there will be 419 per 1,000. This is a well understood economic problem to which, within the UK, the answer has lain in immigration.

It is not my purpose here to touch on these economic questions. I wish rather to look at the political effects. The UK has become a gerontocracy. The proportion of British adults eligible to vote who were aged over 55 in 2007 was approximately 37%. By 2041, that will be a majority of voters aged over 55. It is quite possible that a majority of those who do cast their vote in the UK are already over 55, as voter turnout is much higher among the elderly. So by 2040 it is perfectly possible that 60% or more of all votes actually cast will be cast by people aged 55 or over.

This is significant because it is a matter of indisputable fact that voting patterns are different between the old and the young. It was, to a truly remarkable degree, only the votes of the over 55s that stopped Scottish Independence, voted for Brexit, and elected Boris Johnson. Now any time I write on this subject I get offended older people saying “well I am old but I am not a Tory”. I know. I am not claiming every old person is a Tory. But Unionism, Brexitism and Toryism all are much more predominant among older voters. And while the issues may differ by 2040, I very much doubt there will cease to be differentials between the views of the old and the young.

The long term effects of western political systems which become increasingly dominated by geriatric voters are very unlikely to include a greater willingness to adopt progressive or innovative political approaches. I do not see how there can fail to be a stultifying effect on social progress. Again, I am 61 myself. Of course there are many radical older people. But there is overwhelming evidence that is not the norm.

Gaia has ways of restoring balance. It seems to me a fascinating speculation that, as the planet’s apex predator, mankind has succeeded in increasing individual longevity by increased nutrition and an ability to stave off pandemics which nature would use to keep down the numbers, and which normally would particularly kill older people. But the result of this may be a profound reduction in the adaptability and flexibility of mankind’s political hive mind as it becomes encrusted with geriatric thought, leading to seriously bad political decisions which ultimately will impact population anyway. Climate change is the most obvious example, but the process could have long term subtle effects in many ways.

Thomas Malthus was pilloried for centuries, but his critique of the dangers of human over-population now chimes with envronmentalist concerns. I have no desire to underestimate the suffering of those unfortunate enough to be affected by coronavirus. I do not actually wish to see elderly Tories and unionists carried off by flu. But I suspect you, like me, may very seldom get to read an article referencing the interrelationship of epidemiology, longevity and political systems. As the avowed purpose of this blog is to make people think, I thought readers and commenters may care to stretch their brains on this one.

Finally, as a restorative affirmation of the fact that older people can have very positive contributions to make to political thought, here is last week’s debate between George Galloway and myself on the subject of Scottish Independence. It has become unusual in British politics to see two people with fundamentally different views on a major political issue, discuss the matter with mutual respect and absolutely no rancour. It is a practice that appears to have deserted most professional politicians, as the last disintegrating days of the UK state become increasingly acrimonious.

468 thoughts on “Of Coronavirus and Chartism”