On 5 May, the British security services released to their pet media the claim that Russia, China and Iran were attempting to hack into British research institutes conducting coronavirus research. The BBC reported it. Britain’s shameful copy and paste media all, without exception, just copy and pasted the government press release. 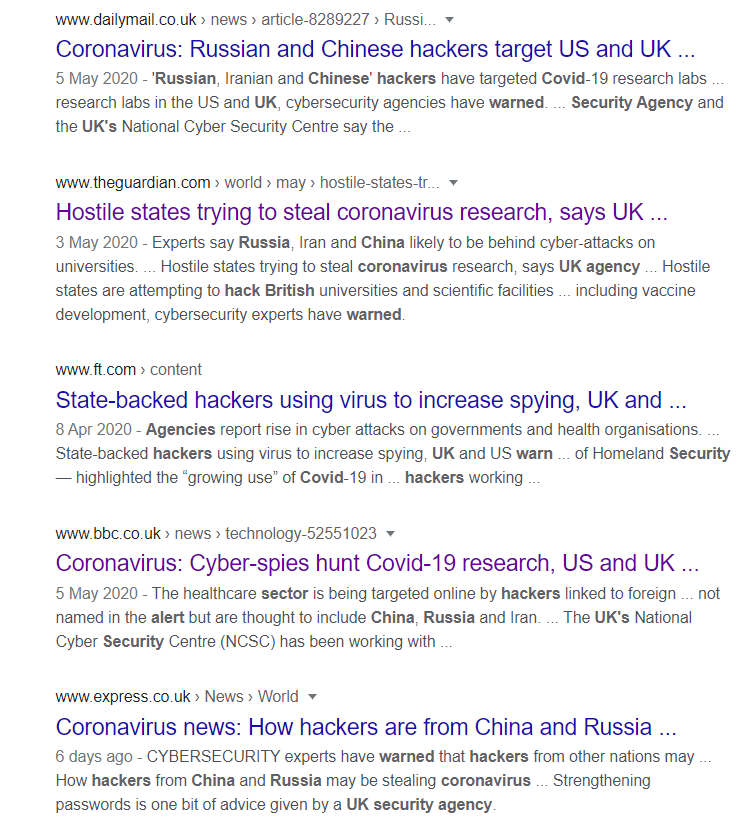 The Guardian gave the quote:

“Any attack against efforts to combat the coronavirus crisis is utterly reprehensible. We have seen an increased proportion of cyber-attacks related to coronavirus and our experts work around the clock to help organisations targeted”.

If Britain had one single mainstream media journalist willing to think, rather than just regurgitate government propaganda, they might have realised that there is a massive story here if you look at it the other way round. The quote from the Guardian deliberately attempted to give the impression that Russia, China and Iran were trying to disable, destroy or hamper coronavirus research: “Any attack against efforts to combat the coronavirus”. But if you read carefully through those articles, you find that the allegation is merely that they are attempting hack in to gain access to the research.

Because the UK and the US are attempting to hide their vaccine and treatment research results from the rest of the world to make money out of them.

Much has been written about the possibility for a new and better kind of world to emerge after coronavirus. Yet our governments cannot conceive of any model for fighting this threat to the whole world, other than the capitalist, money-making model. The much-touted “race to develop a vaccine” is not a race to save lives. It is a race to make billions.

The United States and the United Kingdom are working in all international fora to head off efforts to pool global research and to make any vaccine or medicine a good for the world. Governments can reward those working on the vaccine, and the companies for providing the facilities, using economic models other than the patent and the potential for massive profit.

It may come as a shock to you to realise that at the moment all those lovely vaccine and medicine researchers you see being interviewed on TV about their efforts to compress trials and approvals and get the product to the marketplace, are not sharing their results with fellow researchers around the world. They are rather jealously guarding them and each working in a bubble hoping to be the first in order to cash in. It is certainly true that many of the researchers themselves do not like this, but are controlled by their bosses.

For me, the failure to set up a worldwide shared scientific database on all coronavirus vaccine and medicine research, and the failure to set up a prior agreement on free manufacture worldwide of effective resulting vaccines and treatments, is the most revealing fact about the entire coronavirus episode. The fact that the British government is putting massive resources into ensuring the Chinese or Russians cannot “steal” our research – and doubtless the Chinese and Russians are doing the same, all states are hypocrites in these matters – should sicken everybody.

Our politicians repeatedly attack China for an alleged lack of openness on the pandemic while upholding a profit-led model for tackling it. That model not only excludes openness on research but necessitates security service action to protect the research from being accessed by other researchers in other countries whose collaboration could be invaluable to the world.

There is a report tucked away in today’s Guardian that opens a window on all this:

The sole resolution before the assembly this year is an EU proposal for a voluntary patent pool. Drug and vaccine companies would then be under pressure to give up the monopoly that patents allow them on their inventions, which means they can charge high prices, so that all countries can make or buy affordable versions.

In the weeks of negotiations leading up to the meeting, which is scheduled to last for less than a day, there has been a dispute over the language of the resolution. Countries with major pharmaceutical companies argue they need patents to guarantee sufficiently high prices in wealthy nations to recoup their research and development costs.

Even more fraught have been attempts to reinforce countries’ existing rights to break drug and vaccine company patent monopolies if they need to for the sake of public health. A hard-fought battle over Aids drugs 20 years ago led to the World Trade Organization’s Doha declaration on trade-related intellectual property (Trips) in favour of access to medicines for all, but the US, which has some of the world’s biggest drug companies, has strongly opposed wording that would encourage the use of Trips.

But this refers to protecting the rights in the product eventually to be manufactured. There is prior action needed on lifting all veils on research and the free interflow in real time between companies, institutions and nations of all research ideas and date in the struggle to develop vaccines and treatments. It should be a great joint enterprise bringing the world together, not a race between nations to cash in. The free real time sharing of all research worldwide could make progress substantially quicker, to the benefit of everybody on the planet we share.

If we cannot put aside profit in favour of altruism as the motive in the fight against a massive common threat, then I despair for the future of human society. No wonder we are prey to pandemics.

433 thoughts on “Profiting from Coronavirus”