Astonishingly, the unprecedented Order from the Scottish Parliament to the Crown Office to hand over documents does not include the text messages between Peter Murrell and Sue Ruddick, which Murrell lied to parliament did not exist. In fact Peter Murrell does not feature in the request at all. 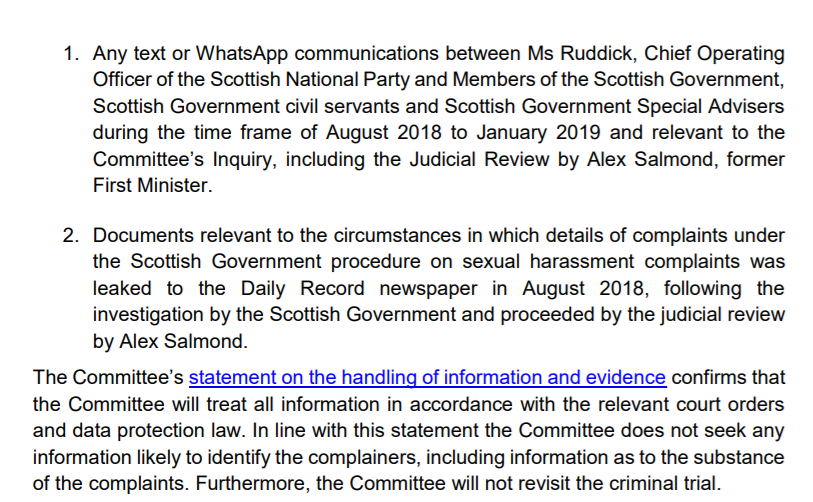 Those who hail the Committee’s Order to the Crown Office as a great breakthrough are not reading carefully enough. It is designed to fail. The orchestration of the plot is revealed very substantially in texts between Ruddick and Murrell. The Committee is only asking for texts between Ruddick and various categories of Scottish Government employee. Murrell and the other concerned SNP employee Ian McCann are not Scottish Government employees, but SNP employees. The Committee has deliberately excluded them.

This means, for example, the Committee will not see the exchanges between Murrell and Ruddick over the occasion when McCann was sent to firm up Woman H and make sure she would go through with it – woman being the accuser of the most serious accusation, and the woman who was not even at the small dinner where she claimed the incident occurred, as shown by eye-witnesses and the kitchen records.

The Committee also specifically excludes the Crown Office from providing any messages which identify an accuser. That makes the Order totally useless, as the only people, to my recollection, who fall into the Scottish government employee category requested, and who were in incriminating correspondence with Ruddick, are indeed false accusers. So the Committee won’t get those texts either. Ruddick’s “evidence generating” expeditions were in collaboration with somebody who, at a very late stage, became an accuser specifically so their tracks would be hidden by a court anonymity order.

It is important to remember that right from the outset of the plot, the accusers were knowingly planning to exploit the court granted anonymity routinely accorded to alleged victims of sexual assault, in order to facilitate their plan. As evidenced by the text from the Woman who Wasn’t There to another accuser-to-be that read:

That message was read out to the jury in the Salmond trial.

The evidence of Geoff Aberdein is the most important single piece of evidence in the current Sturgeon Inquiry at Holyrood. Geoff Aberdein’s evidence is the most important single document in Scottish political history since 2014. It proves that Nicola Sturgeon lied to parliament about when she first was involved in the allegations about Salmond. It is not just that she held a meeting with him on the subject four days before she claimed she first knew – and has subsequently lied to parliament that this meeting was a chance encounter. It is that a full month before Sturgeon claimed she knew, Aberdein was contacted by a very senior member of Sturgeon’s staff and asked to have a meeting with Sturgeon on this subject. Subsequently, as four independent witnesses have testified to Sky News , that senior member of Sturgeon’s staff asked Aberdein to falsify a statement to remove their prior knowledge of the allegations against Salmond. Yet all of this, the most important evidence of the entire inquiry, has been excluded from publication and from consideration by the committee because it involves inextricably one of the anonymous accusers.

It is of course the case that Sturgeon knew of allegations long before even showed by Aberdein’s evidence, when she initiated the process to investigate ex-ministers. But it is not necessary to prove that in order to show that Nicola lied to Parliament – Aberdein’s evidence is sufficient for that.

We do have, of course, the bones of Geoff Aberdein’s evidence because he testified under oath in open court at the Alex Salmond trial as to these events, and I was there and heard him – although the attempt to get him to lie about what happened was not in the Salmond evidence as not relevant, and had not been public before being revealed by Sky.

The Inquiry Committee has now gotten itself into the ridiculous position of refusing to take into account sworn evidence that was given openly and on oath in the High Court of Edinburgh, because their legal advisers tell them it is inadmissible.

The Lord Advocate is a member of Sturgeon’s cabinet, is the prosecutor who prosecuted Salmond (and Mark Hirst and me), is in charge of the Crown Office which is hiding the evidence, and we have the Solicitor to the Scottish Parliament telling the Parliamentary Inquiry it cannot ask for key evidence or reveal key truth.

I must say, I have always been distressed by the calibre of Members of the Scottish Parliament, but their meek acceptance of the bent official advice that they must conduct the inquiry with their eyes closed, ears stopped, hands bound behind their back and one foot firmly secured into their mouth, is frankly pathetic beyond all expectation.

Please do read this excellent article by Iain MacWhirter.

143 thoughts on “An Incredible Omission”