UPDATE Social media has got very excited over the fact the young woman is apparently an actress. But why should she not be? In my extensive contact with actors, they are particularly likely to be politically engaged. I should also note that I have received quite a lot of abuse for pointing out that the reason this one person got on the front page of all the newspapers is that she is young and pretty. That is simply true- it is what newspaper editors do. I am criticising the media for this. Opposing the prioritising of media exposure by physical attractiveness is in fact a classic feminist stance, so I have no idea why feminists are attacking me on it. END OF UPDATE.

In one sense, I am delighted that the heavy-handed police action at the vigil for Sarah Everard has brought about public revulsion at the attack on free speech and the right of assembly, just as Priti Patel prepares to bring in the dreadful policing bill which represents the biggest single threat to freedom of assembly in the UK for 200 years. Its foundational principle is that the right of freedom of assembly is subordinate to the right to drive a SUV anywhere and any time you please, without having to detour around people taking part in democratic expression. It has a subsidiary principle that all public manifestations of political dissent will be intimidated by massive police presence, and that the cost of that massive intimidatory presence will in itself be reason to ban the demonstration. Which would be delightfully Kafkaesque were it only a joke.

The excuse for breaking up the Everard vigil was of course Covid. In all but the most extreme circumstances, where public health management conflicts with the most fundamental of human rights, then human rights should avail. The Patel legislation is not a response to Covid, it is a response to Extinction Rebellion. I remain wholly supportive of ER; the need to jolt people out of their complacency and inaction over climate change is a massive political priority, and I certainly hope Extinction Rebellion will be back with a bang in the summer.

But I am afraid to say it could not escape my notice that the protest over the Everard vigil was in stark contrast to the lack of protest at the police breaking up the Assange vigil in Piccadilly Circus, which was much smaller and less intrusive and much better social distanced. Unfortunately the police ,arrested 92 year old Eric who is not a young and pretty woman, so it got no media coverage. 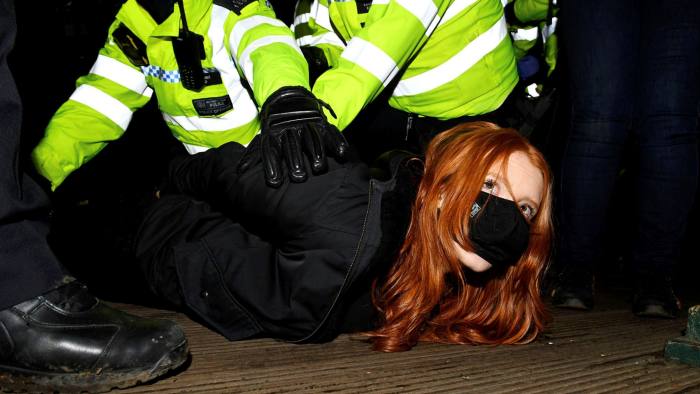 The sad truth is of course that among those vying to be seen in both mainstream and social media to express outrage at the police disruption of the Everard vigil, are many fierce proponents of cancel culture. The outrage over which speech is limited is highly selective. That free speech also extends to Julian Assange or Piers Corbyn is not intuitive to the mainstream media at present. There seems to be a real danger that British society is losing all notion of the idea that free speech is for everybody, not just those you agree with or who are deemed respectable by the media and political class.

I was going to make a joke about freedom of speech extending even to protests without any Duchesses, which led me to recall that there was in fact a bona fide Duchess on the last Assange demonstration I participated in!

Scotland has of course just contributed to this general atmosphere of repression by passing a completely unnecessary Hate Crime Bill. Not only does this outlaw politically incorrect speech even within your own home – and in film and theatrical performances – there is every reason to believe it will lead to an increase in the political prosecutions for which the Scottish Crown Office is becoming renowned. At which point, it is worth noting it is now nearly seven weeks since my hearing for contempt of court, with no sign of a judgement, which seems to me very extraordinary.

441 thoughts on “Vigilant over Vigils”