Skip to content
Home » Posts » Uncategorized » What Can We Learn From the Terrible Fate of Sarah Everard?

Before writing anything about this dreadful case, and before you read my article, it is right to pause to think first about the terrible and entirely undeserved fate of Sarah Everard, and the agony those who loved her must now be suffering.

This tragedy has led me to get into a twitter spat with people who are promoting the line that “all men are potential rapists”. It started when I took issue with a tweet by Stella Duffy (whom I know slightly). 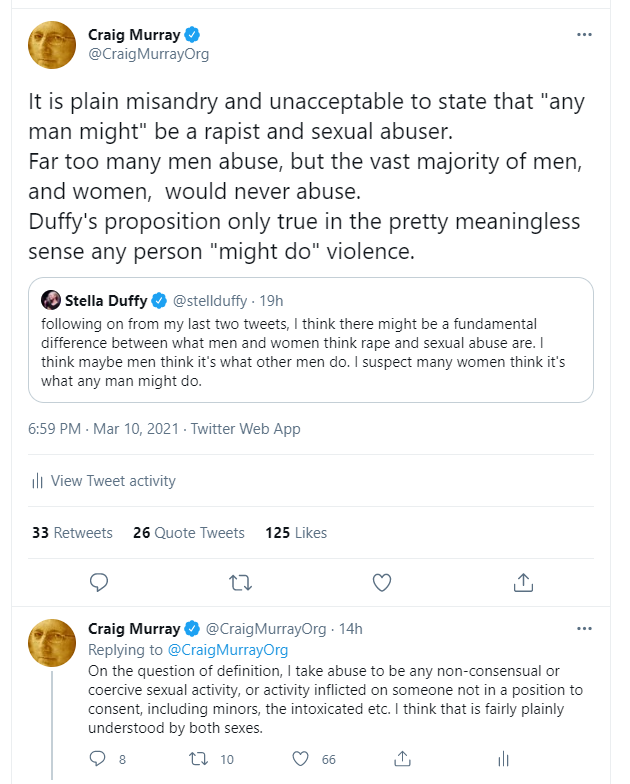 This led to some fierce reactions by feminists, both female and male, then to some more replies by me, and then to quite a few tweets attacking me. As usual when heated debate is precipitated by a single distressing event, passion has been more in evidence than logic.

I think the difficulty lies in an ambiguity of language. The phrase “All men are potential rapists”, or Duffy’s expression “it is what any man might do”, can be taken to mean:

“You cannot tell, by appearance, which man is a rapist” – which is evidently true

“Every man is liable to rape” – which I would argue strongly is not true. The large majority of men would never rape, nor commit any other heinous crime.

I suspect that in some of those arguing on twitter, this is not just ambiguity, this is a deliberate conflation of the two concepts. There does seem to be a strain of radical feminist thinking which is anxious to promote the notion that every man is indeed liable to rape. That plainly is misandry – a gross prejudice, in the most literal sense, against people on the basis of their sex.

More interesting have been a number of twitter responses from women stating that they do indeed need to treat every man they might meet as a potential rapist, for their own self-protection, and adopt strategies to avoid dangerous situations. These are interesting because I think the majority of them are genuine iterations of how the writers really feel.

A large proportion of those responses come back to the fact that you cannot tell by appearance who is a rapist. It seems a stock response, judging by my twitter feed, to state that a woman would feel scared of me if she came across me or heard my footsteps while walking alone in a dark place. That is certainly true, and not only women are scared in those circumstances, though I accept they have more cause to fear.

But I am more interested in the sometimes detailed claims it is normal for women to exercise extreme caution in their every day dealings with half of the human race, when not walking in dark streets. One woman on twitter told me, for example, she had long advised her daughters against going out on one on one dates with men.

I have to say, on an every day basis that simply has not been my experience. In 45 years of adulthood, I have genuinely never picked up any sense of a woman being scared of me. In my career in professional situations I frequently had meetings with women, sometimes in my own office or even over lunch, and as a diplomat sometimes over a drink, and I genuinely have almost no recollection of ever being refused or put off, let alone in circumstances where I suspected the person was worried about my intentions. Had I suspected that, it would very definitely have worried me a lot that I gave such an impression. I have always been over-sensitive to what others think of me, to the point of vanity. I have never felt myself suspected of having potential for sexual violence.

I would very frequently offer to escort someone back to their home or hotel if there was any reason to think protection might be helpful, and was seldom if ever refused. On the purely social level, in my younger days I never had the slightest feeling of anyone being scared of me on a date, or to go with me on a date. Every date I ever had was one on one. I just cannot recognise the claims that women routinely in their daily lives treat all mean as a threat, as true in my own experience. Nor does it seem to be true of the women now close to me, in their dealings with other men.

I quite accept that those women on twitter who have told me that they distrust every man, are telling me the truth of their own experience. But I have never found most women, or indeed any women I encountered, to be like that, and I am telling you the truth of my own experience.

Of course sexual violence is a terrible problem. Of course conviction rates are worryingly low. That does not mean every man is liable to rape.

That some men are a threat is plainly true. The public shock that it may be the case that a figure of public trust, such as a policeman, would be a danger is entirely understandable. That merely reinforces the truism that you cannot tell who is a potential rapist just by looking at them. But there it ends. The large majority of men are very decent people. To say otherwise is nonsense. It in no way disrespects Sarah Everard to state that she was not negligent, just extremely unlucky. The odds of any woman in the UK being abducted off the street in any given year are one in many millions. Of course women walking alone at night should rightly be cautious; men out at night should be particularly vigilant to avoid situations that may alarm women, more so than ever at present. But there is no rational cause for a general state of fear or a general demonisation of the male sex.

I have never viewed the police as particularly like to be good people in their private lives (I naturally except both my brothers here!)

This may surprise you. When I was about six years old, a fairly senior policeman who was acting as a courier for my father, was caught when a bag of illegal money burst. This had quite profound ramifications for me, not least that my father fled the country and I did not see him again for the rest of my childhood. The Rolls Royce and the Mercedes disappeared (I learnt from an uncle only recently that my father’s share of the black money alone in 1965 had been over £1,500 per day, £25,000 a day in today’s money). After my father left, the rest of my childhood was spent in rural but very real poverty. It also meant I had the great fortune to be largely brought up by my maternal grandfather, a profoundly wise and intellectual old socialist. I often wonder what Craig Murray would have been like if that bag had not burst, and I had instead been brought up as the stinking rich heir to a very dodgy gambling empire. Possibly I would have become not a very nice person.

Anyway, I realised policemen were not all great even before I understood the terrible things they can do in an official capacity. Hearing Cressida Dick’s wavering tones over the alleged policeman’s involvement in the terrible death of Sarah Everard, naturally brought to mind that she was directly in charge of the police operation that murdered Brazilian electrician Jean Charles De Menezes, for the crime of looking a bit like an Arab.

It is also worth stating that everyone, including Cressida Dick, appears to be leaping to conclusions amid a blaze of publicity that is going to make a fair trial very difficult. We don’t know the evidence, or the defence, yet.

I am, I know, out of tune with the times. The politically correct repetition of the mantras of identity politics is the only kind of politics which is mainstream acceptable now. A terrible incident like the dreadful fate of Sarah Everard must be responded to by cries of “all men are potential rapists” and a determined effort to drive deeper the wedges between the two halves of the human race.

Not to quite see it that way may even make me socially unacceptable in some circles. I shall have to be stoical about that.

For me, the great gulf in society remains between rich and poor. In rather different ways, that gap in available resources kills millions across this globe every week. You can find gender components in poverty; much more is race a crucial component; but the prime cause of poverty is inequality.

376 thoughts on “What Can We Learn From the Terrible Fate of Sarah Everard?”