I have been obliged to self-publish my new book, The Catholic Orangemen of Togo and Other Conflicts I Have Known, because legal threats from mercenary commander Tim Spicer scared off my publisher:

I have accordingly decided to make it available free online from 12 January as a PDF hosted on over a hundred different websites, in almost thirty different juridictions. I have, however, had physical books printed for those who wish (and purchased carbon offset). I hope to get copies into bookstores shortly, though this is difficult. It is available from Amazon.co.uk for just £11.87

You can however purchase it here, direct from me, for the cover price of £17.99. This includes postage and packing to anywhere in the World, plus a signature and message if you wish.

If you want a signed copy, please note this in the “Special Instructions to Merchant” box when you enter the delivery address, together with any dedication you want with the signature. 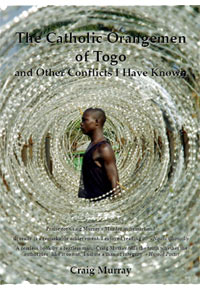 If you wish to pay by cheque or postal order, please write with your details to Craig Murray, 31 Sinclair Gardens, West Kensington, London, W14 0AU. Cheques for £17.99 should be made payable to Craig Murray.

41 thoughts on “Buy: The Catholic Orangmen of Togo (DIRECT)”