The Electoral Commission has sought to apply the handbrake to the gathering momentum for a new Independence referendum, by a submission to the Scottish Parliament which is a model of bureaucratic obstructionism. This is simply a foretaste of the attitude of the “neutral” and “independent” organs of the United Kingdom state, such as the BBC and Electoral Commission, in the coming struggle for Independence, in which the British state will be using all possible levers to defend its own existence.

It should not be forgotten that it is the Electoral Commission which insists that the postal ballots be mixed with the ordinary ballots before counting, so there can be no record of any discrepancy between the postal ballot result and ordinary ballots. If the ordinary ballot was 60% yes and 40% no, but the postal ballot was 90% no and 10% yes, this information is deliberately and systematically destroyed by the counting method insisted on by the Electoral Commission. I have for years been attempting to get a coherent official justification for this deliberate destruction of obviously vital information in guarding against fraud, and have never received one. So I openly proclaim I do not start here from a position of trust in the Electoral Commission.

The Guardian is reporting triumphantly that the Electoral Commission’s submission to the Scottish Parliament on the legislation for Indyref2 throws a 2020 date into doubt and requires at least a nine month lead period for the referendum. This is (for once) a broadly accurate report from the Guardian.

In particular the Electoral Commission argues at para 7 of its submission for a period of “at least six months” between the passing of the legislation and the start of the campaign. This is so that campaigners and administrators can learn and thoroughly understand the rules before the campaign gets underway. 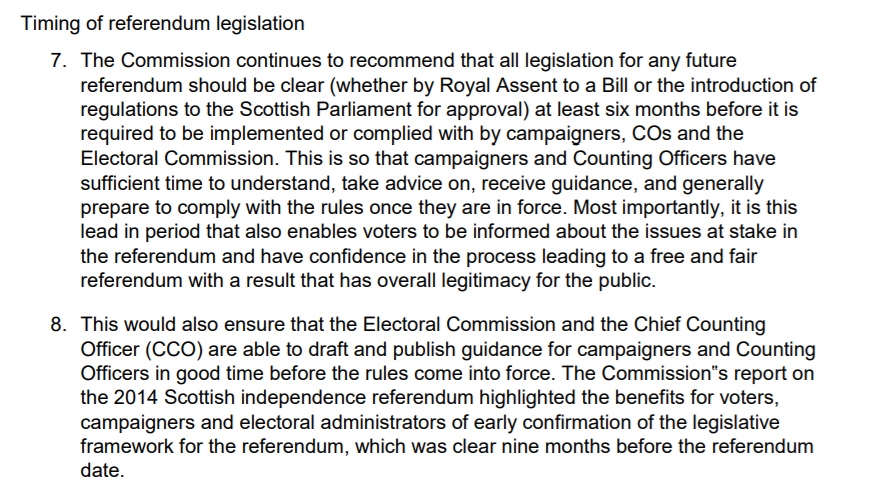 This is ridiculous bureaucratic bullshit. In the EU referendum campaign, the period between the legislation coming into force in December 2015 and the vote – not the campaign start, the vote, – in June 2016 was six months and one week. For Indyref2 the Electoral Commission is claiming it needs six months before the campaign even can start. Yet we have already had a Scottish Independence referendum and the rule changes proposed by either the Scottish Government or the Electoral Commission are minor. The main rules are already known, we have done it before and I have understood all of the proposed changes within three hours of studying them – it does not need six months. More fundamentally, since when has legislation come into force with a six month grace period while we get used to it? I don’t recall that happening the last time they lowered the drink driving limit.

But that is not the limit of the Electoral Commission’s obfuscation. It is demanding the right to change the referendum question, in line with unionist demands. The perfectly straightforward “Should Scotland Be an Independent Country?” – which delivered a result the unionists are loudly declaiming as definitive – was approved by the Electoral Commission. They now “firmly recommend” they should have the power to insist on a new question after 12 weeks consultation with focus groups, opinion polls and political parties, which mumbo jumbo the Commission characterises as “new evidence”, which is an interesting definition of “evidence”. What the Electoral Commission means is that it will insist on a question for which the Tories have long argued, as here:

Had the question been more precisely, “Should Scotland leave the United Kingdom?”, the “No” vote would have been much stronger.

I suspect that the Boris Johnson cabinet has in fact made the prospect of leaving the UK a much more appealing prospect, and this much touted question effect may have radically diminished, but the unionists and Electoral Commission wish to try. If anyone is yet unconvinced that the Electoral Commission is deliberately seeking to postpone an Indyref, note that they state they need a period of 12 weeks to consider the question.

I have one further point to make that has been picked up by neither the Scottish Government’s proposals nor the Electoral Commission’s proposals. That is the restriction on who can fund.

Why is that the UK and not Scotland? The only people who can vote are residents of Scotland. Surely this is a Scottish democratic exercise and the same people should be allowed to donate who are allowed to vote? Why should English residents be permitted to fund and sway the campaign in Scotland? For the purposes of this referendum, England is as foreign to the process as anywhere else, and if English residents can fund a campaign, then why ban French, German, Spanish, American or Russian residents?

The United Kingdom routinely holds its General Elections in five weeks from dissolution of parliament to the new PM moving into Downing Street, and occasionally in less than a month. Those elections feature long and complex manifestos containing myriad policies, generally published about three weeks before the polling date. The notion that a second Scottish Independence referendum would require ten months, and that it would require a new question, is nonsense that further calls into question the motives of the Electoral Commission.

We have become used to the brazen anti-Independence bias of the BBC. It is hard to live with the cognitive dissonance that comes from distrusting the institutions we have been brought up to respect, but we should treat the Electoral Commission with no more trust than the BBC.

There will not be a repeat of 2014. The British Establishment were fairly relaxed about that Independence referendum because they did not believe they could lose – remember Yes started around 30%. They had the fright of their lives, and we saw the ramping up of BBC bias, the breaking of purdah rules with “the Vow”, and some peculiar postal vote turnouts in response. This time all that will be much exaggerated and we will definitely see a far higher presence from the UK government’s online covert players – 77th Brigade, GCHQ, Integrity Initiative etc. We will see more activity from security services including by agents planted inside the Independence movement which could include agents provocateurs and false flag incidents. And we will see state institutions like the BBC and Electoral Commission acting in an increasingly biased fashion.

That is why it is essential that, if we go the referendum route again, we have international observers from the Organisation for Security and Cooperation in Europe (OSCE) who will monitor all of these aspects, crucially including media monitoring. I hope to announce a new initiative on this shortly on which I will request your assistance.