Sky News are today carrying the story that Nicola Sturgeon attended a meeting with Salmond’s former Chief of Staff, Geoff Aberdein, about a historic sexual allegation made against Alex Salmond on 29 March 2018, several days before she claimed to parliament that she first heard of it. It will prove in the long term still more significant that this meeting also contradicts Sturgeon’s claim that it was Alex Salmond who first told her of the existence of the allegations.

This all appears to come as news to James Matthews, the Sky reporter. The extraordinary thing is, that both he and I sat through the testimony under oath on this point of Geoff Aberdein at the Alex Salmond trial.

On 8 to 9 March 2018 … had contacted him to say she was involved in a process of looking at complaints about Alex Salmond. He had spoken to Kevin Pringle and Duncan Hamilton by conference call to discuss this. On 29 March 2018 he had held a meeting with Nicola Sturgeon in the Scottish Parliament to discuss this. On 2 April he had attended a further meeting in Sturgeon’s home.

Matthews obviously thought it of no significance – but then again, it was defence evidence and Matthews, in common with the entire mainstream media, reported virtually zero of the defence evidence. Today’s Sky News article helpfully gives links to the headlines of their Salmond trial stories: 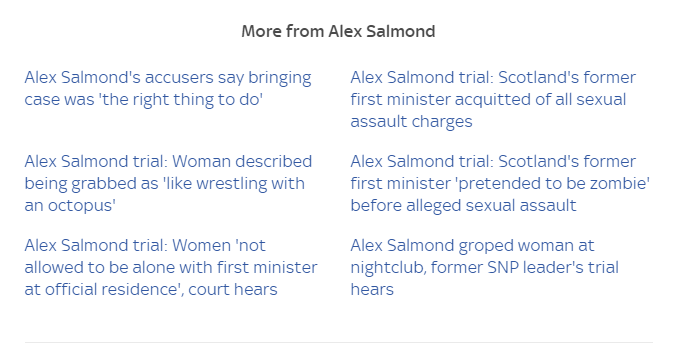 As you will see, lurid allegations from the prosecution witnesses – lurid allegations which were untrue – were prominently featured as the headlines. You will search those reports in vain for detail or even a bare outline of the defence case. The verdict is treated as a shock, and then we are straight in to stories querying the verdict.

Matthews and all the MSM hacks came for a hanging. They thus missed the real story, which is of a conspiracy at the highest levels of the Scottish Government to frame Alex Salmond. This finally seems to have penetrated even James Matthews’ thick skull. Had he been paying attention to the defence evidence, he could have published today’s article two months ago.

This relates to the single allegation in the Salmond trial which was about a real incident which actually happened, as opposed to a fiction, a distinction the jury appears to have made by finding only this one “Not Proven” and the others “Not Guilty”. Salmond stated it was a case of working very late together and drinking, getting intimate and going a bit too far with a cuddle. At the time he made a formal apology through a civil service process, which was accepted, and given the choice of transfer the official continued to work closely with him.

The separate official who contacted Aberdein about weaponising this initial Salmond allegation is somebody extremely close to Nicola Sturgeon and very senior in her office. She first contacted Aberdein on 8-9 March – almost a full month before Sturgeon claims she first knew of the allegation.

Anybody who knows how Sturgeon operates would find it extremely improbable that a senior member of her office would be undertaking such discussions without her knowledge. It is simply impossible that the staff member would then go on to arrange a meeting with Sturgeon herself on the subject, without Sturgeon’s prior knowledge and agreement. So we can be extremely confident that Sturgeon knew about the allegation before 29 March, and very probably before 9 March.

It seems from the Sky article that Sturgeon’s defence is to call Geoff Aberdein a liar.

This may be difficult for Aberdein as at the 29 March meeting the only other person present was the senior official from Sturgeon’s office, a person whose truthfulness I am by no means alone in holding in great doubt. But in his sworn evidence Aberdein stated that he had a teleconference to discuss the development with Duncan Hamilton and Kevin Pringle, both persons of considerable probity.

I was deeply shocked, indeed shaken, on Friday evening when I was shown a new letter from the Crown Office, denying the existence of a document relevant to my own defence which I know for certain to exist and to be held by the Crown – it was one of those documents, proving the wider conspiracy, excluded from the Salmond trial by the judge as “collateral evidence”. I am now just as shocked by the above Scottish government statement about the 29 March meeting. Lies, evasions, sophistry and denials are perhaps to be expected from politicians, but they are being communicated by civil servants, which says something about the degree of corruption in Scotland today.

I am very sorry, but Scottish politics are about to get very dirty indeed. The degree of penetration and influence by the UK security services behind these events must not be underestimated.