Every single Imperial occupation of Afghanistan since Alexander the Great has had the same justification. They were all defensive invasions, necessary to reduce the “threat” from Afghanistan to the Imperial power. As those who have read my book Sikunder Burnes will know – and if you haven’t, you should – the first British occupation of 1839 was to topple a ruler viewed as potentially likely to ally with Russia and Persia in an invasion of British India. The second and third British invasions had the same justification. The Soviet invasion was to protect the Central Asian regions of the Soviet Union from infiltration by Islamic ideals. The American invasion was to stop more attacks like 9/11, as though there was something magic in the soil of Afghanistan that had prompted Osama Bin Laden and his small band of men, who had effectively left before the invasion was well established.

There is nothing unique about Afghanistan here. Almost every Empire in history has ostensibly pushed its borders ever outwards, in order to protect those borders from the barbarians the other side. It is the “defensive” logic behind the expansion of Empires. It is of course a lie, to justify looting, seizure of resources, rape and aggression. Most Empires as they developed added further justifications of high civilising mission, forcing the barbarians to be more like themselves. Education, sanitation – you know the playbook. That is why we are being bombarded with meaningless statistics about how many pupils are at school now in Afghanistan under American occupation. The statistics on opium and heroin production, which had been reduced to virtually zero under the Taliban and boomed to highest ever levels under US occupation, peculiarly do not figure in this narrative. The US occupation depended for its physical survival on supporting local warlords who were the heroin producers. 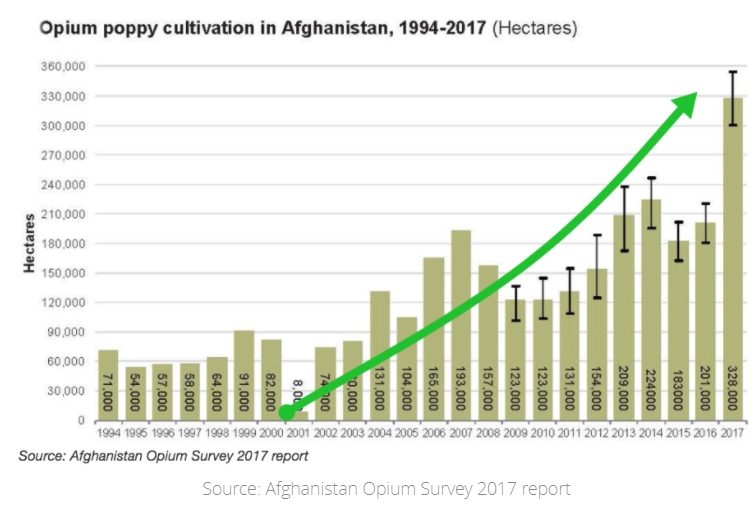 This was not an accident. I concur with this article that increasing heroin production was actually a goal of the United States as an agent of control in a country where the wholesale application of military force on the population has never worked. There is a great deal yet to be told about CIA involvement in Afghan heroin, and I expect we will learn more in fairly short time. I recount in Murder in Samarkand the heroin convoys being waved through on the Friendship Bridge en route to the Baltic ports, which could not have happened without the connivance of the Afghan, Uzbek and US governments. I also recount the death in an aircraft accident of my friend Richard Conroy of the United Nations whilst investigating this.

It is a further remarkable consistency of history that the British, Russian and American occupiers all sought to ally with the northern Uzbek, Tajik and Hazara tribes against predominantly Pashtun opposition. To the extent that the first puppet the Americans installed, President Karzai, was a member of precisely the same branch of the Dourani royal family as the puppet Shah Shuja that the British so spectacularly unsuccessfully installed in 1839. That is not to learn from history in the most plain fashion.

The primary true motive of the occupation of Afghanistan was originally the Trans Afghan Pipeline to take Central Asia’s massive supplies of natural gas – the gas reserves of Turkmenistan alone have a higher thermal value than the oil reserves of Iraq – down to Pakistan, India and onward via the Indian Ocean. This scheme was eventually stymied by Putin through his agent Alisher Usmanov and his aggressive Gazprom diplomacy in Central Asia. I was astonished to read that the pipeline project is not quite dead in this recent article, and that the Taliban has offered to guard it.

This was how the invasion of Afghanistan all started, with discussions by Enron and Unocal (board member George Bush sr.) with the Taliban on guarding the pipeline project, discussions in which Unocal was represented by its consultant, the future President Karzai. This paragraph from the article is a fair but sparse summary:

Global energy majors have latterly shown no enthusiasm for TAPI, but that was not always the way. In 1997, a consortium comprised of six companies and the government of Turkmenistan was formed with the goal of building a 1,271-kilometer pipeline to Pakistan. India was not yet part of the plan. The largest share in that consortium, 54 percent, was held by California-based Unocal Corporation. In 1997, the American company even arranged travel to Texas for a senior Taliban delegation for negotiations. Deadly terrorist attacks in 1998 against U.S. embassies in Tanzania and Kenya organized by Al-Qaeda, whose leader Osama bin Laden had been provided safe haven by the Taliban, put paid to all that.

This misses some vital details, like the fact that Enron organised the meeting in Texas, and that it was held in the Governor’s mansion with George W Bush, at the time Governor of Texas. I suggest younger readers google Enron, which was one of the great financial scandals. Here is the full text of the key letter:

Dear George,
You will be meeting with Ambassador Sadyq Safaev, Uzbekistan’s
Ambassador to the United States, on April 8th. Ambassador Safaev has
been Foreign Minister and the senior advisor to President Karimov
before assuming his nation’s most significant foreign responsibility.
Enron has established an office in Tashkent and we are negotiating a $2
billion joint venture with Neftegas of Uzbekistan and Gazprom of Russia
to develop Uzbekistan’s natural gas and transport it to markets in
Europe, Kazakhstan, and Turkey. This project can bring significant
economic opportunities to Texas, as well as Uzbekistan. The political
benefits to the United States and to Uzbekistan are important to that
entire region.
Ambassador Safaev is one of the most effective of the Washington Corps
of Ambassadors, a man who has the attention of his president, and a
person who works daily to bring our countries together. For all these
reasons, I am delighted that the two of you are meeting.
I know you and Ambassador Safaev will have a productive meeting which
will result in a friendship between Texas and Uzbekistan. 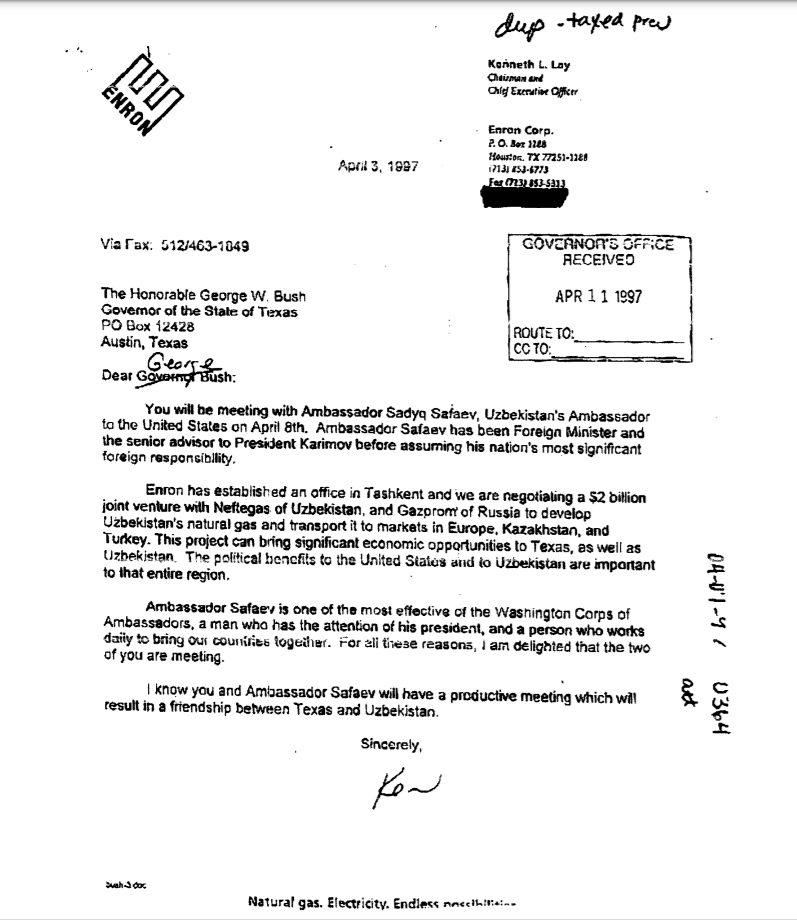 I want you to think about this. I published detailed information about the Bush family, the gas pipeline and American motives for maintaining the invasion of Afghanistan in Murder in Samarkand, along with information about the heroin trade, information I learnt first hand as British Ambassador in Uzbekistan. The book was a bestseller. I was invited to lecture at pretty well every major university you can mention worldwide, and at most of the big influential think tanks. Yet all this real story of the occupation of Afghanistan has virtually never been aired in the mainstream media, and these facts appear to be written out of history. They feature nowhere in the numerous discussions in the last 24 hours on the announcement of American withdrawal.

As a historian myself, I find the disconnect between the facts that really happened and what becomes the established narrative – and will be history – alarming. The extent to which we live in a propaganda construct in which received truth cannot always be trusted, is crystal clear to me now.

I very much hope that President Ghani and the Taliban will be able, without outside interference, to find a way to bring their devastated country together. I fear that the US, UK, Uzbekistan, Pakistan, India, Saudi Arabia, the UAE, Russia and China will each continue to meddle in Afghan affairs in a way that will prove entirely debilitating. I had planned to journey to Kandahar in February to discuss the future with members of the Afghan community not aligned to the USA, whose view from the ground is almost never heard in the western world. I still intend to do that once Covid-19 restrictions allow.