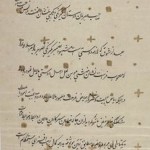 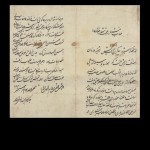 This is a letter from Maharajah Ranjit Singh, the Sikh Emperor who was an astonishing figure in history, to Alexander Burnes. It is in the John Murray collection in the National Library of Scotland. I suspect the second part is a covering letter.

There is no translation, and the very small number of scholars who have looked at it evidently have no idea what it says. The NLS have it down as being in Urdu, though I would have thought Persian more likely.

I hope there are no copyright issues with my publishing the images, though frankly it is not doing much good sitting untranslated in a folder in a box in the NLS. Of course, I am yet again hoping that some of my astonishingly erudite readers will be able to help me get a translation. If we can work out a translation, I will give it to the NLS to insert in the folder.

I have now finished with my archive research in the NLS on Burnes, and I should say it has been an absolute delight. The staff have been infinitely helpful and patient, and put up with my failure ever to manage to use the right coloured form. Moreover I felt welcomed at registration and was not faced with the extraordinary inquisition I got at the British Library, demanding my reasons to want to view the material.

And I shall particularly miss the delicious soup in the cafe.

Burnes’ policy recommendation was that, on the death of Ranjit Singh, most of his more recent conquests of Muslim lands – including Kashmir and Peshawar – should be returned to Muslim rule under Dost Mohammed of Afghanistan. A strong Muslim state would provide the necessary buffer between UK and Russian territory. He was of course overruled in favour of the invasion of Afghanistan and the British annexation of the Sikh Empire and of Scinde.

I have some images I want to upload but they are in huge files – 80Mb, so I need to substantially reduce the definition first. I don’t seem to have any software on this computer that can alter images. Can anyone recommend a good free download? They are TIF files, I think.