A particularly sickening trick from the BBC a few weeks back raised my blood pressure whilst in hospital and almost finished me off. A French Euro MP was asked for “the French view” on Scottish independence. She said that France would oppose it and the French government takes the view that an independent Scotland would be outside the European Union. I was absolutely astonished that the BBC had managed to find the only French person in the entire world who is against Scottish independence, and that she was telling an outright lie about the position of the French government.

Then I realised who she was – the former research assistant (and rather more) of New Labour minister and criminal invoice forger Denis Macshane. She worked for years in the UK parliament for New Labour, in a Monica Lewinsky kind of way. All of which the BBC hid, presenting her simply as a French Euro MP. There are seventy million French people. How remarkable that the one the BBC chose to give the French view of Scottish independence was a New Labour hack!

Today the news came out that Scotland contributes a net £3.6 billion a year to the UK government finances. Scotland’s fiscal deficit is an extremely respectable 2.6%, compared to 6% for the UK as a whole, or 6.3% for the rest of the UK excluding Scotland.

On a realistic maritime boundary, which an independent Scotland would undoubtedly win from the International Court of Justice, Scotland would actually have a budget surplus of £1.9 billion. Hurray, boys and girls, we are in the black! Remember I was Head of the FCO Maritime Section and I personally was involved in negotiating most of the UK’s maritime boundaries, including with Ireland, France, Denmark and Belgium.) 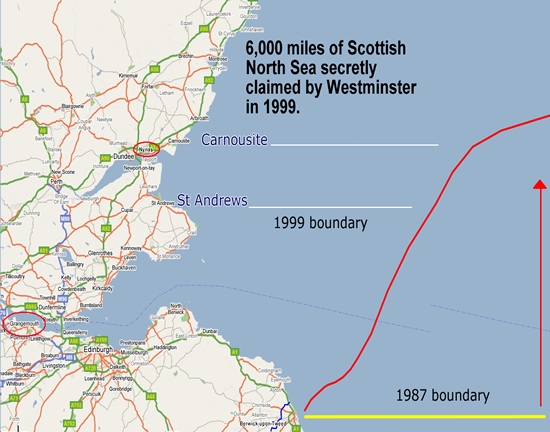 I know it is hard to believe, but that really is the England/Scotland maritime boundary which the revenue figures in the GERS report are based on. That is why England’s oil revenues are surprisingly high in the report – and Scotland’s surprising low.

But even on that boundary, the GERS report shows beyond any argument that Scotland’s public finances would be much better outside the Union.

The BBC have simply become addicted to the Big Lie when it comes to Scottish Independence. Talking of big lies – now they are even wheeling out Blair!

270 thoughts on “Propaganda against Scotland”