The BBC have finally dredged a party line to reply to the outcry about the extraordinarily unrepresentative audience for BBC Question Time from Dundee, which included two ex Labour candidates granted questions and an astonishing number of English accents. The BBC’s extraordinary defence is that the selection was predicated on finding a 50-50 balance of remain and leave voters because of the EU referendum.

“Thank you for contacting us about Question Time held in Dundee on 10th March 2016.

We gather some viewers were concerned that the audience was not representative of Dundee and that therefore the discussion was biased.

The programme, as with all editions of Question Time, was open to people from surrounding areas as well as those living in the city where it took place. We do aim for a wide variety of views on different subjects to be heard on Question Time. The audience included SNP, Labour, Conservative, Liberal Democrats, Greens, UKIP and Scottish Socialist Party voters, reflecting political opinion across Scotland. On the question of the EU referendum the audience was balanced with equal numbers of ‘leave’ and ‘remain’ supporters and a fewer number of undecided people. The BBC is obliged to cover the debate around Europe in a balanced and impartial way at this time.

There was plenty of applause for all sides in the debate. Whoever speaks from the Question Time audience is down to the dynamic on the night; who puts their hands up, who claps loudest and so on.

This means that though the audience was balanced; viewers may have felt that those asking questions represented the view of the complete audience. This is not the case, but we appreciate you contacting us with your concern in this matter. ”

The only problem with this explanation is that it is totally different from the approach taken to the Independence referendum debates. There the broadcasters flatly refused to have a 50/50 audience and instead chose the audience according to how Scotland voted at the 2010 Westminster Election. That meant only 19.9% were SNP supporters and audiences were overwhelmingly unionist. Yet the next referendum comes along, and there is a completely different criterion for studio audience selection.

Of course we all know why the BBC does not wish to be consistent and now select by 2015 Westminster election vote… The tendentiousness of the BBC is unlimited.

Once upon a time, being a leader writer for the Times implied Jupiter like vision and magisterial judgement, thundering out opinions that changed events across the globe. Astonishing that now it is done by the empty, bombastic Murdoch lickspittle Oliver Kamm.

On 7 February I published an article calling out Kamm for publishing a blatant and deliberate lie about me. The very next day, 8 February, my Wikipedia page came under obsessive attack from somebody called Philip Cross who made an astonishing 107 changes over the course of the next three days. Many were very minor, but the overall effect was undoubtedly derogatory. He even removed my photo on the extraordinary grounds that it was “not typical” of me. Edits to Wikipedia articles can be seen by clicking the “view history” tab top right. Here is just a sample of the record of “Philip Cross'” obsession with me. 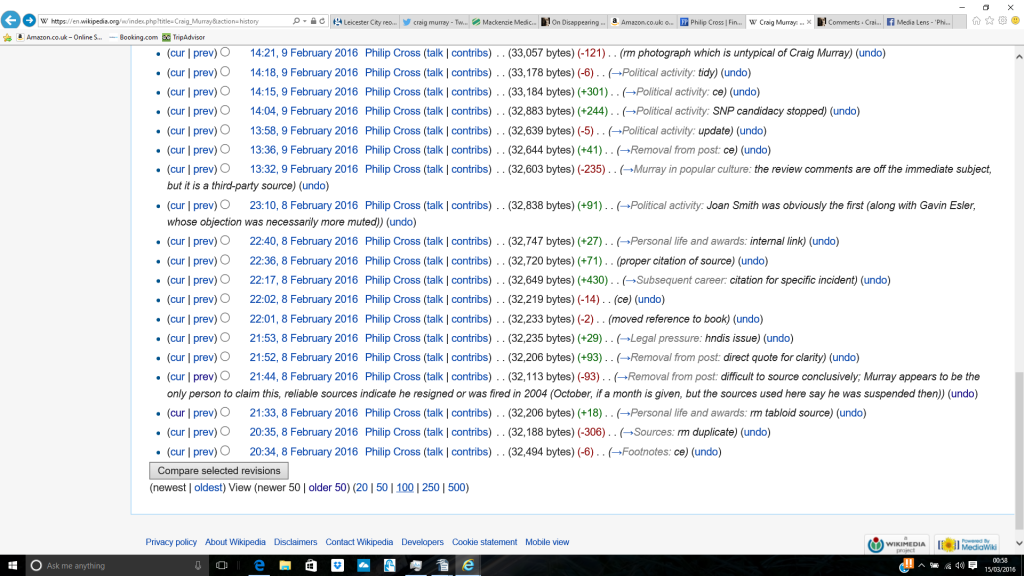 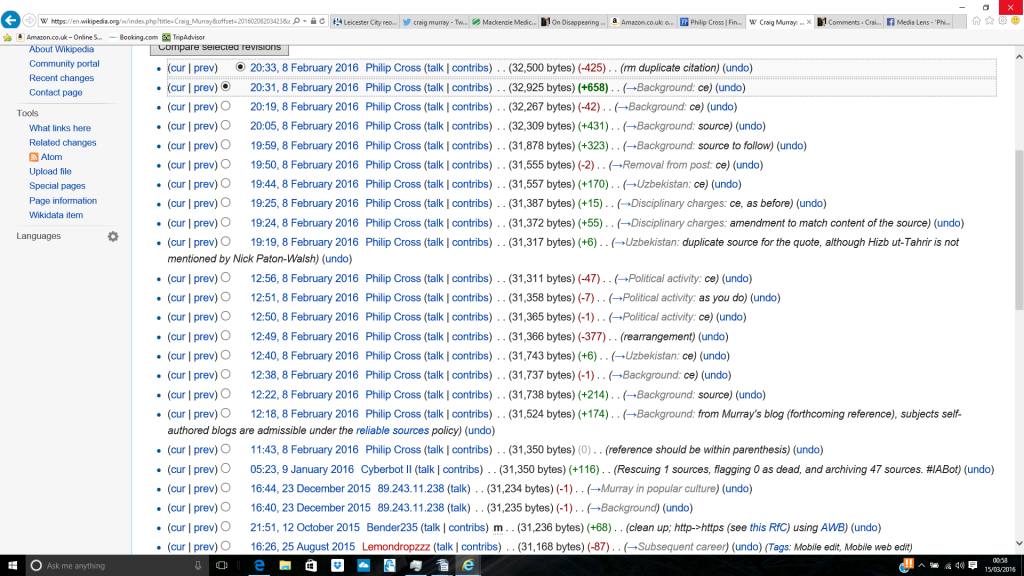 I don’t look at my own Wikipedia page, but was told about it yesterday. I therefore googled Philip Cross and was amazed to discover that he is allegedly an alias for Oliver Kamm attacking people online. Furthermore that Kamm has employed lawyers to threaten those who claim that he is Philip Cross, and by Kamm’s own account the Metropolitan Police have even warned off Neil Clark from saying Kamm is Cross. The Kamm/Cross affair was discussed on George Galloway’s show on Saturday. It starts 12mins 30s in.

It could of course be an extraordinary coincidence that Philip Cross, who has been named as Oliver Kamm, launched this massive attack on my Wikipedia entry the day after I outed Kamm as a liar on this blog.

But here is another extraordinary coincidence for you. On 6 August 2015 Philip Cross had launched an initial edit attack on my Wikipedia entry, with only about two dozen edits. What was my last blog post before that attack? The revelation that Murdoch lackeys at the Times had tens of thousands of fake twitter followers purchased for them. I have only criticised Murdoch’s Times operation twice in two years, and each one has been followed immediately by attacks on my Wikipedia entry from Philip Cross. I wonder if Mr Kamm’s lawyers would care to explain this?

I am not alone by any means. The magnificent Stephen Sizer has suffered fearful attacks for his stalwart stand against the oppression of Palestinians, at great risk to his livelihood in the new neo-con Welby Church of England. Sizer has been a constant target for Oliver Kamm. On 22 August 2015 Oliver Kamm published an attack on Stephen Sizer in the Jewish Chronicle describing him as “an insanitary crackpot.” Of course, something published in the Jewish Chronicle on 22 August will have been written a couple of days earlier – around 20 August 2015. On 20 August 2015 we find that “Philip Cross” made six edits to Stephen Sizer’s Wikipedia page. These coincidences really do build up, don’t they?

And just in case you are not convinced, in early February 2015 Kamm was launching a series of twitter insults at Stephen Sizer, including Kamm’s remarkable claim that Veterans Today – for which several of my ex-CIA friends write – is an “anti-Semitic website”. 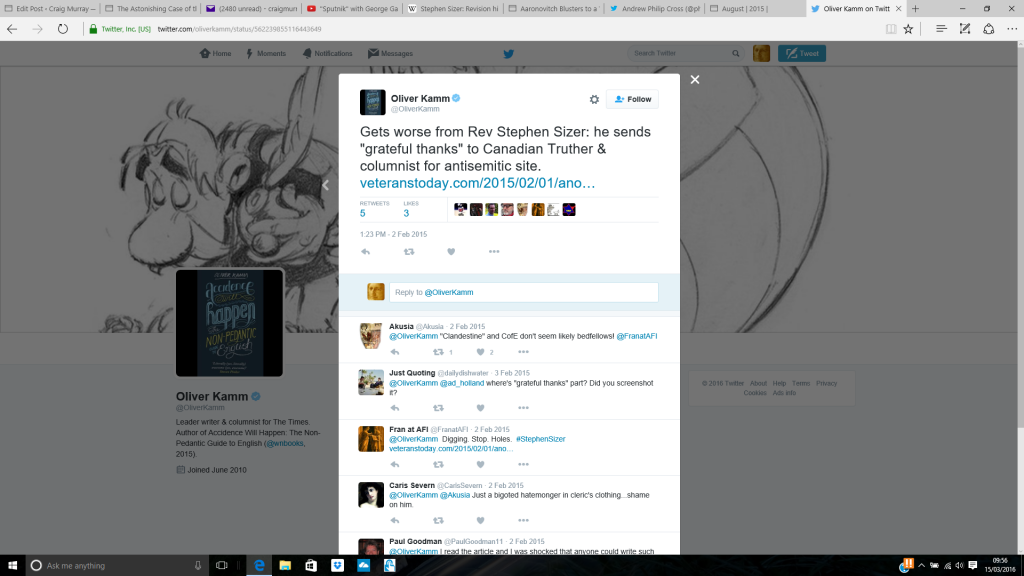 Now I really do not care whether or not “Philip Cross” is actually Oliver Kamm or whether he is just Oliver Kamm’s bitch. For Oliver Kamm’s lawyers, my address is 89/14 Holyrood Road, Edinburgh, EH8 8BA. I should love to see Kamm explain all this in court.

Kamm has for years exhibited an absolute obsession with attacking John Pilger, the great Australian journalist. Just google “Oliver Kamm John Pilger” to see. And who has hundreds of edits on Jon Pilger’s Wikipedia page? Philip Cross. Cross has apparently his own twitter account. Here it is obvious that he shares Kamm’s precise views. Zionism, and accusing pro-Palestinians of anti-Semitism, is the single most dominant element along with attacks on Jeremy Corbyn, Julian Assange and Kamm’s other targets. Cross retweets the Jewish Chronicle, for which Kamm is a columnist, and notably Joan Smith, leading anti-Assange campaigner and former partner of convicted expenses fiddler and Israeli lobbyist Dennis McShane.

I genuinely had no idea that Kamm had an established reputation for years for weird internet trolling. For example he published readers’ reviews on Amazon of 19 of Noam Chomsky’s books, giving every one of them one star. That link is very well worth reading, incidentally. Did you know that Kamm has written that the invasion of Iraq was “the most far-sighted and noble act of British foreign policy since the founding of NATO”?

There are some very serious points to all of this. It is not just personal flim-flam. The first serious point is that it really is the most appalling comment on what Murdoch has done to the Times, that its leader-writer should be such a low creature as Kamm. A man who has not only written that the Iraq invasion was “great”, that Noam Chomsky is an “idiot” and that John Pilger is a “fraud”, but who genuinely appears to hold those views.

The second is a very serious point indeed about Wikipedia. “Philip Cross” is not just anybody who can, like you and me, make edits on Wikipedia. he is a senior editor with special administrative privileges. He uses this access on a continued basis to repeatedly and in enormous detail denigrate any individuals who hold anti-establishment views. Equally sinister, he bigs up and protects the reputation of those who promote the corporate media agenda. “Philip Cross” has not just edited, but according to Wikipedia “predominantly written” the hagiographic entries of

Philip Cross may be Oliver Kamm. Or he may be someone who shares his views closely and echoes them in a synchronised way. Or he may be an identity which cloaks the activities of a group of people. But it is absolutely plain that “Philip Cross” is used systematically to attack the Wikipedia entries of prominent anti-establishment figures, and simultaneously to bolster the image of the corporate media. The purpose of “Philip Cross” is to ensure that an anti-establishment narrative does not take hold on Wikipedia.

The burning question is this. “Philip Cross'” activities and purpose are blindingly obvious. Actions such as the hundred edits to my page and removal of my photo, or the continued war on John Piger’s entry, are completely unjustifiable. Why then does Wikipedia continue to tolerate “Philip Cross” and grant him administrator privileges?

Oliver Kamm briefly held an internet admin account in his won name. It is particularly noteworthy that Kamm was contacted by email on 28 June 2007 at 17.25 in this guise by “slim virgin”, another Wikipedia admin account that has been widely reported to be a security services front. It ostensibly belongs to Canadian Oxbridge graduate Linda Mack, but impossibly high levels of activity (including once editing straight for 26 hours) have led many to conclude that Slim Virgin is a team – she averaged 100 articles a day, seven days a week, for a year! Linda Mack was believed by ABC News to have been acting on behalf of MI5 in monitoring their Lockerbie investigation while working for their London bureau. The admin page on which “slim virgin” contacted Oliver Kamm is specifically about his attacks on Neil Clark, which is where we came in.

There are just far too many coincidences and linkages for any reasonable person to conclude that nothing murky is happening on Wikipedia. We know for certain from the Snowden revelations that the government does carry out internet operations to promote its narrative and to degrade the image and reach of known opponents on the web. I know from personal professional experience that the security services work with trusties in the media. We have plainly uncovered something at the edge of one of these operations here.

UPDATE I have received twitter messages from “Philip Cross” that he is a person, not part of GCHQ, and that his activity on Wikipedia is often sparked by things he has read, including by Oliver Kamm. He also points out that I had blogged that I did not like my photo on Wikipedia (this is true). He states that Oliver Kamm’s influence on his Wikipedia activity is “not as great as it seems”. I have replied to “Philip Cross” asking if he knows Oliver Kamm, and why Kamm has any influence at all on his Wikpedia activity. I shall keep you posted.

FURTHER UPDATE “Philip Cross” has now replied that “occasionally, it is one of OK’s tweets that reminds me. There is no conspiracy here and I am not a paid editor.” No reply to if he knows Oliver Kamm.

Hat-Tips to Node, Clark and Squonk