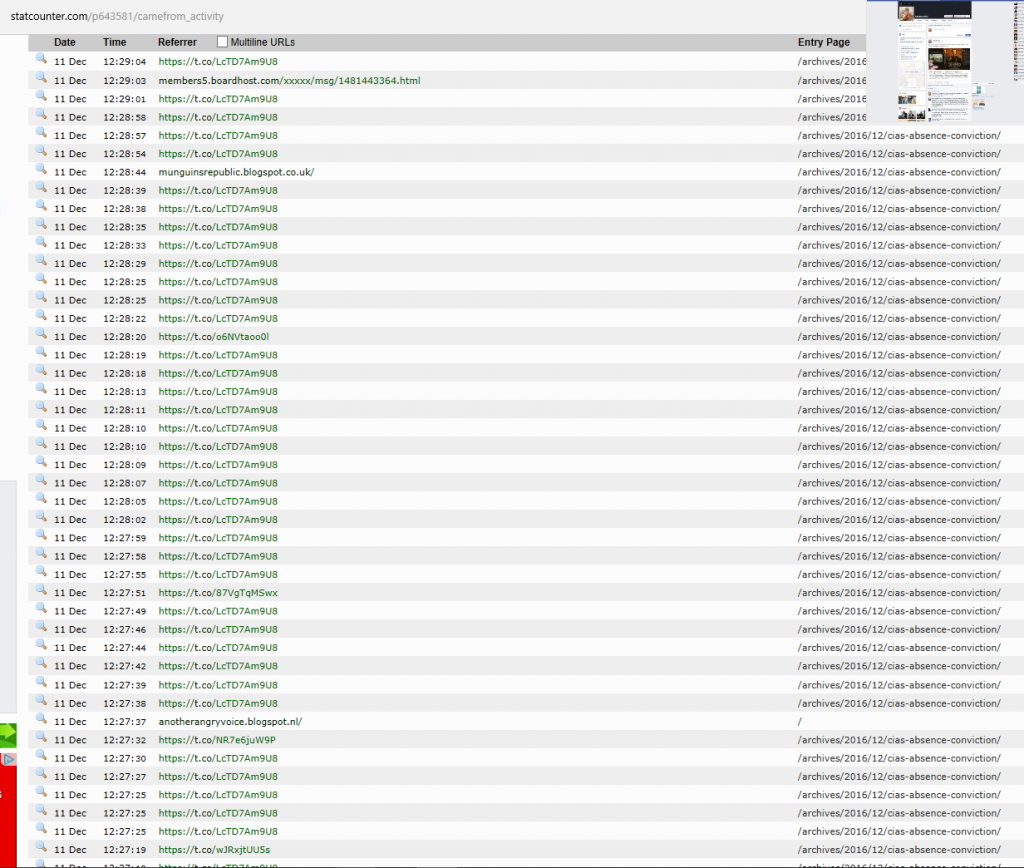 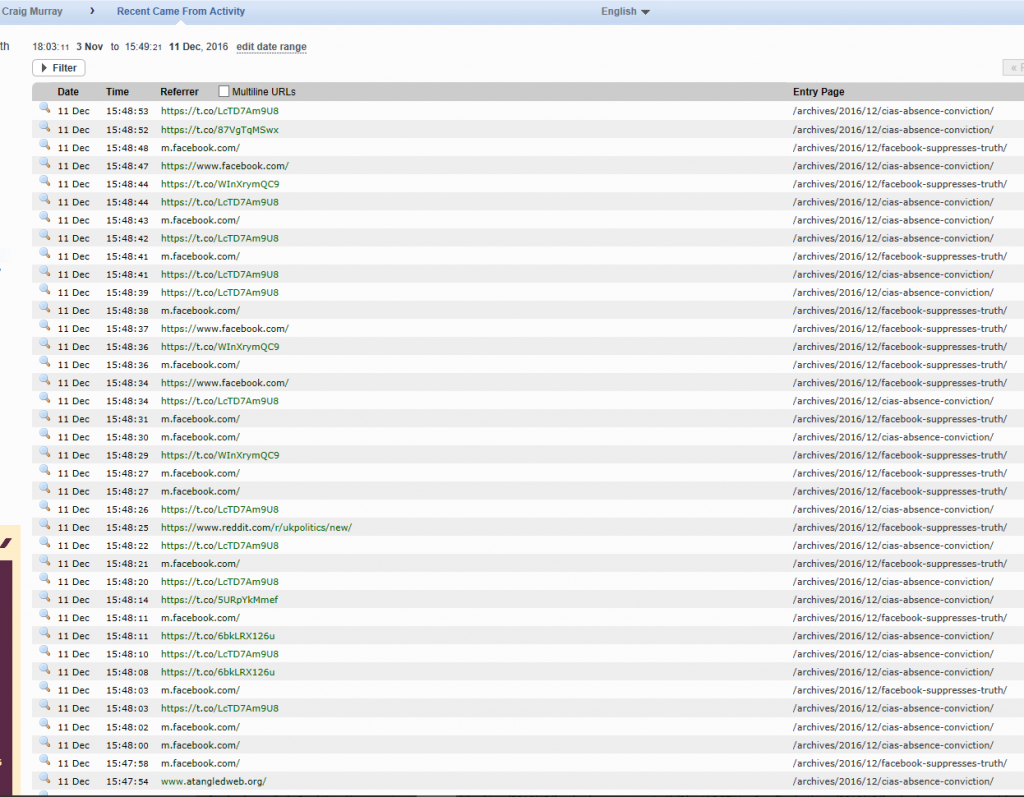 I have watched incredulous as the CIA’s blatant lie has grown and grown as a media story – blatant because the CIA has made no attempt whatsoever to substantiate it. There is no Russian involvement in the leaks of emails showing Clinton’s corruption. Yes this rubbish has been the lead today in the Washington Post in the US and the Guardian here, and was the lead item on the BBC main news. I suspect it is leading the American broadcasts also.

A little simple logic demolishes the CIA’s claims. The CIA claim they “know the individuals” involved. Yet under Obama the USA has been absolutely ruthless in its persecution of whistleblowers, and its pursuit of foreign hackers through extradition. We are supposed to believe that in the most vital instance imaginable, an attempt by a foreign power to destabilise a US election, even though the CIA knows who the individuals are, nobody is going to be arrested or extradited, or (if in Russia) made subject to yet more banking and other restrictions against Russian individuals? Plainly it stinks. The anonymous source claims of “We know who it was, it was the Russians” are beneath contempt.

As Julian Assange has made crystal clear, the leaks did not come from the Russians. As I have explained countless times, they are not hacks, they are insider leaks – there is a major difference between the two. And it should be said again and again, that if Hillary Clinton had not connived with the DNC to fix the primary schedule to disadvantage Bernie, if she had not received advance notice of live debate questions to use against Bernie, if she had not accepted massive donations to the Clinton foundation and family members in return for foreign policy influence, if she had not failed to distance herself from some very weird and troubling people, then none of this would have happened.

The continued ability of the mainstream media to claim the leaks lost Clinton the election because of “Russia”, while still never acknowledging the truths the leaks reveal, is Kafkaesque.

I had a call from a Guardian journalist this afternoon. The astonishing result was that for three hours, an article was accessible through the Guardian front page which actually included the truth among the CIA hype:

The Kremlin has rejected the hacking accusations, while the WikiLeaks founder Julian Assange has previously said the DNC leaks were not linked to Russia. A second senior official cited by the Washington Post conceded that intelligence agencies did not have specific proof that the Kremlin was “directing” the hackers, who were said to be one step removed from the Russian government.
Craig Murray, the former UK ambassador to Uzbekistan, who is a close associate of Assange, called the CIA claims “bullshit”, adding: “They are absolutely making it up.”
“I know who leaked them,” Murray said. “I’ve met the person who leaked them, and they are certainly not Russian and it’s an insider. It’s a leak, not a hack; the two are different things.
“If what the CIA are saying is true, and the CIA’s statement refers to people who are known to be linked to the Russian state, they would have arrested someone if it was someone inside the United States.
“America has not been shy about arresting whistleblowers and it’s not been shy about extraditing hackers. They plainly have no knowledge whatsoever.”

But only three hours. While the article was not taken down, the home page links to it vanished and it was replaced by a ludicrous one repeating the mad CIA allegations against Russia and now claiming – incredibly – that the CIA believe the FBI is deliberately blocking the information on Russian collusion. Presumably this totally nutty theory, that Putin is somehow now controlling the FBI, is meant to answer my obvious objection that, if the CIA know who it is, why haven’t they arrested somebody. That bit of course would be the job of the FBI, who those desperate to annul the election now wish us to believe are the KGB.

It is terrible that the prime conduit for this paranoid nonsense is a once great newspaper, the Washington Post, which far from investigating executive power, now is a sounding board for totally evidence free anonymous source briefing of utter bullshit from the executive.

In the UK, one single article sums up the total abnegation of all journalistic standards. The truly execrable Jonathan Freedland of the Guardian writes “Few credible sources doubt that Russia was behind the hacking of internal Democratic party emails, whose release by Julian Assange was timed to cause maximum pain to Hillary Clinton and pleasure for Trump.” Does he produce any evidence at all for this assertion? No, none whatsoever. What does a journalist mean by a “credible source”? Well, any journalist worth their salt in considering the credibility of a source will first consider access. Do they credibly have access to the information they claim to have?

Now both Julian Assange and I have stated definitively the leak does not come from Russia. Do we credibly have access? Yes, very obviously. Very, very few people can be said to definitely have access to the source of the leak. The people saying it is not Russia are those who do have access. After access, you consider truthfulness. Do Julian Assange and I have a reputation for truthfulness? Well in 10 years not one of the tens of thousands of documents WikiLeaks has released has had its authenticity successfully challenged. As for me, I have a reputation for inconvenient truth telling.

Contrast this to the “credible sources” Freedland relies on. What access do they have to the whistleblower? Zero. They have not the faintest idea who the whistleblower is. Otherwise they would have arrested them. What reputation do they have for truthfulness? It’s the Clinton gang and the US government, for goodness sake.

In fact, the sources any serious journalist would view as “credible” give the opposite answer to the one Freedland wants. But in what passes for Freedland’s mind, “credible” is 100% synonymous with “establishment”. When he says “credible sources” he means “establishment sources”. That is the truth of the “fake news” meme. You are not to read anything unless it is officially approved by the elite and their disgusting, crawling whores of stenographers like Freedland.

The worst thing about all this is that it is aimed at promoting further conflict with Russia. This puts everyone in danger for the sake of more profits for the arms and security industries – including of course bigger budgets for the CIA. As thankfully the four year agony of Aleppo comes swiftly to a close today, the Saudi and US armed and trained ISIS forces counter by moving to retake Palmyra. This game kills people, on a massive scale, and goes on and on.