The Zielsdorf family will be deported by the UK Home Office tomorrow, in an act of pointless Tory cruelty that enforces immigration regulations designed for SE England and totally unsuited to the needs of the Highlands. Laggan village store is now closed down.

We called on the Zielsdorf family again two months ago. Having been unable to find anybody else to buy and run the business in Laggan for a sum which would anywhere near clear their investment, they literally have no home to go to in Canada. Jason is hoping to buy an old bus for them to live in. Yes, a bus. They are however a resilient and cheerful family buoyed by their religious faith.

You can find worse acts of Tory cruelty – the cutting of benefits to the terminally ill deemed able to work a few more weeks, for example. But it is hard to conceive of an act of Tory cruelty which is more absolutely pointless than the deportation of the Zielsdorfs. Laggan loses its store, they lose their home and living, and the store/cafe’s employee loses their job. Not to mention the Tory fantasy of leaving the EU and rejoining the British Empire as rather strangely kicking off by deporting Canadians.

I was simply horrified by the nasty comments underneath a story on this in the Scotsman a couple of weeks ago. I will not link to it. I like to think that the nastiness of May does not reflect our society, but there are some deeply unpleasant people out there in the unionist community. The comments also made a large number of totally incorrect assumptions. In fact the Zielsdorfs have claimed no UK benefits of any kind and have used neither the NHS nor the school, they home educate. Personally I think as fully participating and tax-paying members of the community they should have used those state assets, but they were scrupulous in not doing so.

There is so much injustice in Tory Britain you trip over it when you are not looking. We just enjoyed a long weekend in the Highlands, and stayed through airbnb at the Wayfarers’ Rest in Laggan. Our hosts were the delightful Zielsdorf family, who could not have been more friendly and welcoming. Their kindness and attention were particularly remarkable given they are every second awaiting the arrival of the border force to deport them. 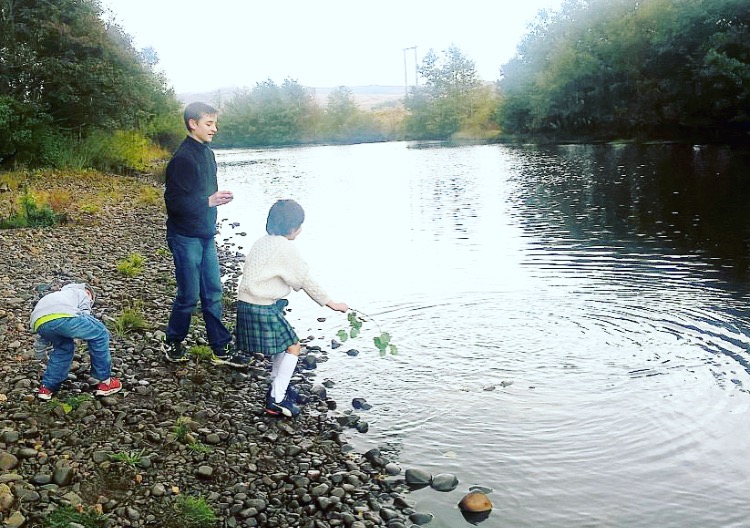 Jason and Christy Zielsdorf are Canadian. They have been in Scotland for eight years, legally, and several of their children were born here. After studying theology at St Andrews, Jason decided to stay on. Armed with an entrepreneur visa, two years ago he bought the general store and bothy in the small Highland village of Laggan. The premises had been empty for 18 months, because there is not a rich living in providing this community service. The Zielsdorfs reckoned that by investing in the accommodation and opening a coffee shop highlighting their excellent home cooking (and it really is excellent), they could make a go of it and cater not just for locals but the passing hillwalkers. And they have done.

It took some time and a lot of work for the business to find its feet, and to date they have only been able to give full time employment to one person, not the two their visa stipulates. Although they argue given time their business will reach a stage to employ two people, the Home Office says their time is up and is insisting on their deportation; a month ago they were told they will be deported imminently.

Deporting children who have only ever known Scotland is ludicrous. Fairly well the entire community of Laggan has written in support of the Zielsdorfs. Both Jason and Christy have Scottish ancestry.

It is not easy to run a business in the Highlands and Laggan is better for what the Zielsdorfs have done. Local MP Drew Hendry has worked hard for them, but met only unhelpfulness from the Home Office, who have not even given a ministerial meeting promised in response to a parliamentary question.

We do not know when they will get the 5am knock on the door and be taken into custody. They have been unable to sell the Wayfarers’ Rest, in which they invested £240,000, because just as before they came, nobody else wants to run it. In an act of supreme pettiness, the Home Office have confiscated Jason’s driving licence, which makes life in the Highlands near impossible. Also as a former pastor Jason used to pay community visits on elderly and vulnerable people in isolated locations, which he cannot now do.

The truth is, having set arbitrary numerical limits on net immigration, if the Home office deports the Zielsdorf family that reduces net immigration by seven – and they are low-hanging fruit, easy to find, not able to disappear and defenceless. Their plight is Tory Britain’s heartless xenophobia in action.

This case is a prime example of how ridiculous it is to rule the Highlands from London. The law is framed to deal with the immigration situation in London or Birmingham. It is totally inappropriate to the Highlands, where the problem is under-population, where a village store is a precious thing and providing even one full time job to the community is invaluable.

It is also of course worth noting that it takes a special kind of government stupidity to embark upon post-Brexit relationships by picking on the Canadians.