Skip to content
Home » Uncategorized » Why Britain is a Flawed Democracy

This graph tells you most of what you need to know about what passes for democracy in the UK today. 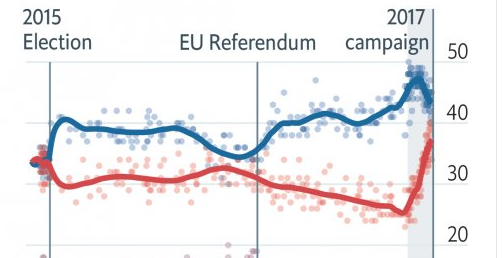 The shaded area at the right represents the period in which election law obliged the broadcasters to give fair and balanced coverage during the election campaign. The result is obvious.

Of course, it has not been that fair and balanced. We can identify four definite areas where it has been anything but. These are:

a) Demeanour towards different parties. Labour and SNP candidates were, as a matter of plain verifiable fact, interrupted far more often than Conservative candidates. That can be empirically verified eg both Paxman and Neil interrupted Corbyn over twice as often as they interrupted May. Qualitative analysis is trickier, but opposition candidates were in general treated with more scepticism and hostility, eg Keir Starmer being told by John Humphrys yesterday that he would not care about human rights if his own daughter had been killed.

b) Selection of the agenda. The Conservatives had different subjects they wished to concentrate upon, notably Brexit and security, and for the most part the media followed, in lockstep, this agenda. So Tories were quizzed mostly about the subjects on which they wished to be quizzed. Difficult subjects like the Tory relationship with Saudi Arabia were never raised. Labour however were quizzed ad nauseam about the IRA and lack of enthusiasm for nuclear holocaust, and very seldom quizzed on the NHS, education etc. With the SNP this was even more evident with a focus on almost nothing except a report on failings in the Scottish schools system, and zilch on Westminster, non-Holyrood affairs which are appropriate to this election. In the last week the media concentrated everywhere almost exclusively on security issues, as though nothing else matters.

c) Papers reviews. All broadcast media feature lengthy reviews of the national newspapers. As these are overwhelmingly owned by offshore billionaires and rabidly right wing, this gives an opportunity to further reinforce the right wing agenda

d) “Independent” commentators who are anything but. The paper reviews are one example of an area where “independent” commentators are almost always brought in to discuss the papers, and these commentators span the spectrum from UKIP to right wing Blairite. Throughout the election a very right wing commentariat was brought on to “assess” election news items. Uber-Tories like Alex Massie and Fraser Nelson appeared in this context, not allocated against Tory time share. Paul Mason is the only left wing individual I ever saw invited. This is reinforced by the appeal to the authority of right wing think tanks which are presented as independent and authoritative. The banker financed Institute of Fiscal Studies was frequently used, and we also saw bodies like Migration Watch, Policy Exchange and the Henry Jackson Society. None of this was identified as right wing comment or counted against Tory allocated time.

So the coverage was hardly fair and balanced, but despite this it was a great deal more fair and balanced than it normally is, because it was impossible for broadcasters to avoid giving a certain amount of unmediated time to Jeremy Corbyn and Nicola Sturgeon, and even to Caroline Lucas and Leanne Wood. The result of even this limited fairness was that collapse in the Tory lead.

Here is the important bit. This is not because Theresa May was below par, or Jeremy Corbyn was above par. The speeches of Jeremy I have watched have been a little below his normal standard, possibly due to overwork. May has always been this wooden. She is completely lacking in charisma and not very bright. Cameron kept her in position as a sop to the right wing of his party and precisely because he did not want a more capable right winger in high office.

No, the truth is that the media have been systematically selling us a lie for years; a totally false image they had portrayed of Theresa May’s competence and personality, and an equally false image of Jeremy Corbyn, had been drummed into people’s minds. Remember the only impression 99% of people had of either was what the media had told them. And it was a lie. It was a lie so blatant and obvious, that even the limited exposure to the truth over this past four weeks, with every attempt by the media to counterbalance that truth, has led to massive changes in the public perception of both May and Corbyn. 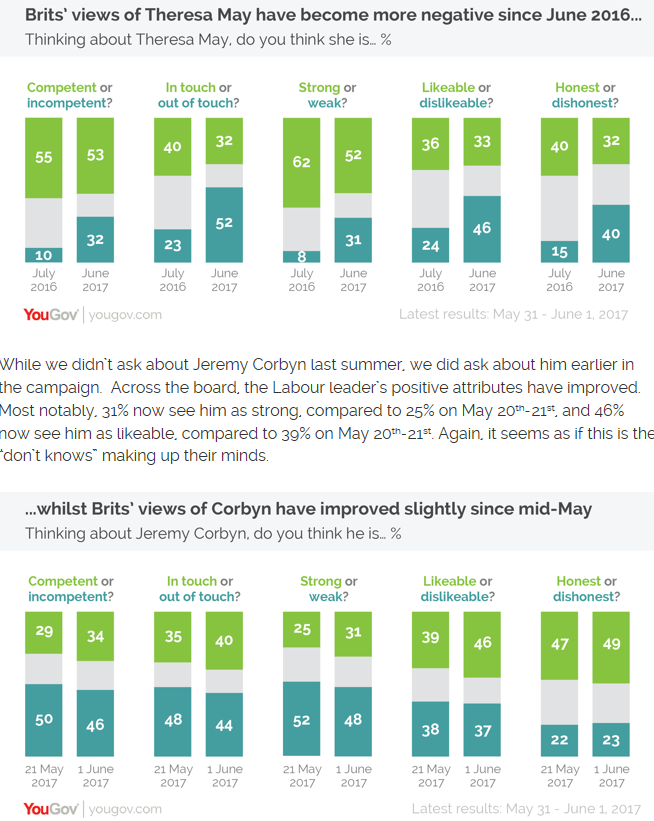 To return to the first graph, what we see is that political fortunes change massively when the mainstream media is obliged to give even a degree of fair exposure. But it is also evident that the sustained damage done over years of completely biased attrition, is probably too much to retrieve in a month. It further shows that the broadcast media is still extremely influential. “Independent” media is owned by offshore billionaires. The BBC hierarchy is openly Tory – the Chairman and Vice Chairman of the BBC Trust, the Head of News James Harding, Sarah Sands, Nick Robinson, Andrew Neil etc. are all open Tories.

A certain amount of free debate, and a tiny gesture towards balance, is allowed for four weeks every few years in the broadcast media. The print media does not do even that. In that four weeks, the people may start to change their views radically once the stream of propaganda carries some nuggets of reality, aided by social media. You cannot call this controlled exercise in temporary permitted dissent “democracy”. It is more a pressure valve in a system of corporate oligarchic control.

Get out today and vote against the Tories. In Scotland, SNP.

151 thoughts on “Why Britain is a Flawed Democracy”