Almost ten years ago, when I was less obscure than I am now, I was at a country house party hosted by Michael Winterbottom at a rented mansion in Norfolk. Other guests included Steve Coogan, Stephen Fry, Rob Brydon – and Gillian Anderson.

It was a very wild party and as a result most people woke up very late. The first two people up and about for breakfast were Gillian Anderson and I. So we sat down together with our breakfast and chatted for quite a while before the next person appeared. She is very bright, and interested in other people and society, as I find so many good actors are.

Unfortunately the next person who appeared was my brother Stuart. Now Gillian Anderson has a very similar height, build and hair to Nadira, who was still asleep upstairs. Entering from a door right behind Gillian, and seeing her sitting opposite me chatting over breakfast, Stuart made the obvious assumption. He made two rapid strides to stand behind her, placed his hands suddenly on her chest, and shouted “Morning! Guess who?”

To her credit Gillian did not become hysterical, but this did take some calming down. The next person to appear was her husband, and I cannot say I liked him at all. He told me he owned NCP car parks and insisted on telling us how many hundreds of millions he was worth. In his terms I was a nobody, and he made that view plain. They seemed a very strange couple – she plainly did not measure people by their bank balance.

Anyway, I hope you enjoyed my anecdote as much as I enjoyed all that name-dropping. And I do hope it makes Ruth Davidson jealous. 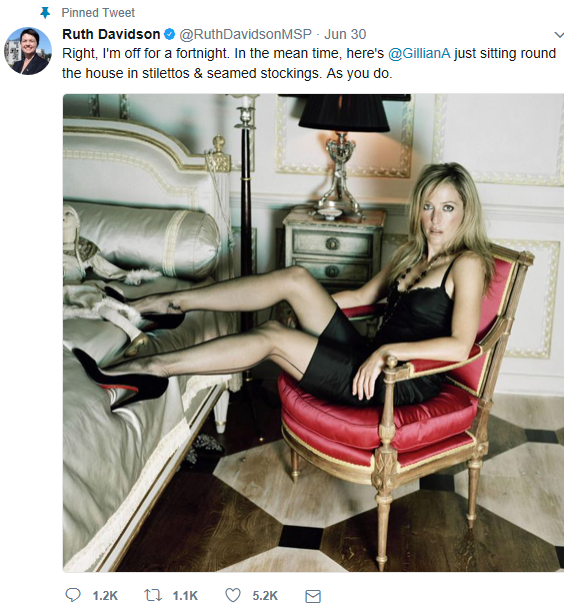 See comment from Sharp Ears below. Apparently he didn’t own NCP but a wheel clamping firm. See my response also.