These are extremely dangerous times for the world. North Korea is exposing the futility of deterrence theory and causing nuclear weapons all over the world to be dusted down, at a time when a maverick outsider in the White House has been captured by a bunch of Generals who make Dr Strangelove look rational. Anybody who thinks sending occupying troops into Afghanistan is ever going to work is clearly certifiable.

The febrile state of the American political system has resulted in a peculiar McCarthyist witch-hunt against Russia, in which people who you would presume must have some capacity for rational thought, such as the editors of the Washington Post and New York Times, have abandoned that rationality in favour of anti-Russian hysteria.

As a British diplomat I cultivated contacts with Ken Saro Wiwa and his circle in Nigeria as they pushed against the tyrannical regime of President Abacha and the environmental destruction of their region, most notably by Shell. I cultivated Alexander Kwasniewski as a young opposition leader who eventually defeated the great Lech Walesa. I cultivated John Kufuor, opposition leader in Ghana, who like Kwasniewski went on to be President. I cultivated Mohammed Solih’s people in Uzbekistan. The later stages of all this are covered in my books The Catholic Orangemen of Togo and Murder in Samarkand.

As a diplomat it is your job to have relations not only with those in government, but to prepare in case the government changes. It is also your job, where you can get away with it, to push the political landscape in the direction your own government wishes. That is of the very essence of diplomacy.

If the Russians – and every other major government – had not been putting work into cultivating Trump and his circle, they would not have been carrying out the functions of diplomacy in the way they are carried on by every single country in the world – and by none more than the United States. For every contact between any Russian and anyone connected to Trump’s circle, now to be dredged up one after another and conflated into some master plot by Putin to take over the whole world, is complete nonsense. It is not just nonsense but dangerous nonsense because it is pumping up international tension between nuclear powers beyond cold war levels, and there is no shortage of potential flashpoints where things could go horribly wrong.

Bernie Sanders and Donald Trump both reflected disillusionment at the massive exploitation of ordinary people by the ruling Establishment, though unfortunately the American people were cheated – most instrumentally by Clinton, the DNC and the rigged primary contest – into getting Trump rather than Sanders. The political system has still not adjusted to a new reality. Radical change is coming in both the US and the UK, but in both countries the Establishment for now still controls enough of the legislature and judiciary to hold the line. But I do not anticipate the demand for greater social justice will die down. The successful diversion of the revolutionary impulse by the Establishment media to the cause of the alt right in the United States and of racist Brexit in the UK, I believe will prove a temporary phenomenon.

But when so much bad blood is rushing around the body politic, the odd boil will erupt through the skin. One such boil is Louise Mensch, the former British Tory MP and multi-millionaire now recast as anti-Russian cheerleader in the United States, where she is given an astonishing amount of mainstream media space for her crazed theories.

Yesterday I got Louise Mensch all excited: 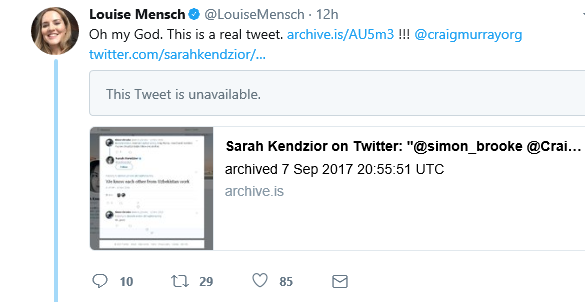 The tweet that made her say “On my God” was this one. We got not just an “Oh my God” out of Louise but also a “Christ!”: 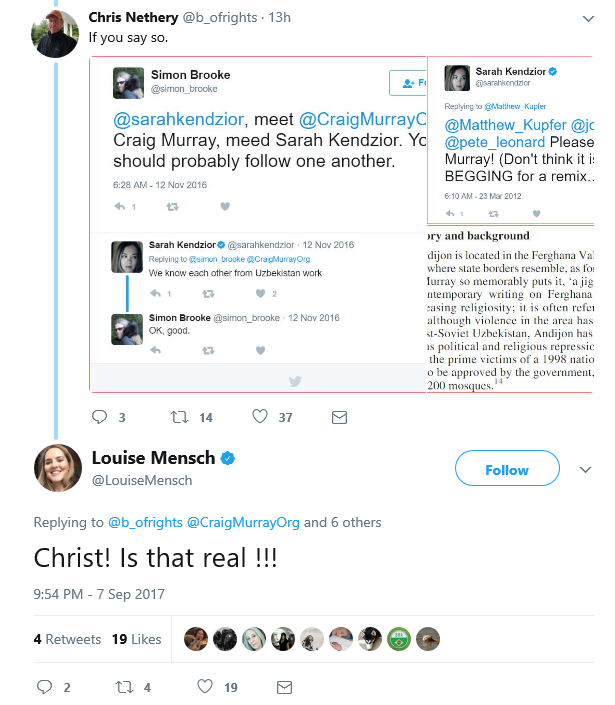 Precisely what Mensch’s new God-fearing chums make of her choice of expletives I know not. But a rational person may wonder what about these tweets could cause such ecstasy in Ms Mensch.

Louise has taken up online with one of the crazed self-styled security experts who is jumping on the anti-Russian bandwagon in the United States, named Chris Nethery. Mr Nethery believes and has convinced Ms Mensch (so far as I can judge) that Sarah Kendzior, Uzbek opposition leader Mohammed Solih and I are members of a Russian intelligence cell which is undermining America. Those tweets appear to the rather strange mind of Ms Mensch to prove compelling evidence of this.

Ms Kendzior is a journalist. About seven or eight years ago she did some excellent academic work on Uzbekistan which I praised on this blog. I may have met her at that time but do not recall doing so. I have certainly not heard from her since. I have no emails from her. But still more hilarious is Nethery’s evidence that Mohammed Solih is a Russian agent. Mohammed is in exile in Turkey and like many opposition figures would be rather likely to be handed over for execution to the Uzbek regime should he come into Putin’s clutches. The Russian “expert” Nethery’s evidence of Solih being a Russian agent is that “Solih participated in the Russian invasion of Czechoslovakia in 1968”.

It is not a secret that Uzbekistan was part of the Soviet Union. In 1968 Mohammed Solih was 18 years old and would have been compulsorily conscripted into the Soviet armed forces. Nethery’s accusation is ludicrous. It is like blaming the vets for the Vietnam war.

The Trump White House is dysfunctional and that clearly indicates the rottenness of the American political system. Xenophobia has become the rule. The anti-immigrant xenophobia of Trump’s supporters is mirrored by the equally irrational anti-Russian xenophobia of Trump’s opponents. Laughable figures like Mensch get to write columns in formerly great newspapers. I did not expect to see the United States decline so quickly.

I face a libel suit in the High Court in England brought by Jake Wallis Simons, Associate Editor of the Daily Mail Online, and his lawyer Mark Lewis. The judge has approved over £100,000 in costs for Mr Lewis and £40,000 damages are sought in addition. I have been directly threatened with bankruptcy. All help against England’s draconian anti-free speech laws is much appreciated.

154 thoughts on “The Disintegration of the American Body Politic”