No matter how much you dislike Trump, only a fool can fail to see the implications for public access to information of the massive suppression on the internet of the Hunter Biden leaks.

This blog has been suffering a ratcheting of social media suppression for years, which reached its apogee in my coverage of the Julian Assange trial. As I reported on 24 September:

It was not just me: everyone reporting the Assange trial on social media suffered the same effect. Wikileaks, which has 5.6 million Twitter followers, were obtaining about the same number of Twitter “impressions” of their tweets (ie number who saw them) as I was. I spoke with several of the major US independent news sites and they all reported the same.

I have written before about the great danger to internet freedom from the fact that a few massively dominant social media corporations – Facebook, Twitter, Instagram – have become in effect the “gatekeepers” to internet traffic. In the Assange hearing and Hunter Biden cases we see perhaps the first overt use of that coordinated power to control public information worldwide.

The way the power of the “gatekeepers” is used normally is insidious. It is quite deliberately disguised. “Shadow banning” is a term for a technique which has many variations. The net result is always that the post is not ostensibly banned. Some people see it, so that if the subject of the suppression claims to be banned they look stupid. But it is in fact shown to far, far less people than it would normally be. So even members of my own immediate family find that my posts no longer turn up in their timeline on either Facebook or Twitter. But a few followers, presumably at random, do see them. Generally, though not always, those followers are apparently able to retweet or share, but what they are not told is that their retweet or share is in fact put in to very, very few people’s timelines. The overall audience for the Tweet or Facebook post is cut to as little as 1% of what it might be without suppression. As 90% of the traffic to this blog comes in clicks from these social media posts, the effect is massive.

That was the technique used on the Assange hearing. In normal times, the ratchet on traffic can be screwed down or released a little, from week to week or post to post.

As I reported on September 27 last year:

What I find deeply reprehensible in all the BBC coverage is their failure to report the facts of the case, and their utter lack of curiosity about why Joe Biden’s son Hunter was paid $60,000 a month by Burisma, Ukraine’s largest natural gas producer, as an entirely absent non-executive director, when he had no relevant experience in Ukraine or gas, and very little business experience, having just been dishonorably discharged from the Navy Reserve for use of crack cocaine? Is that question not just a little bit interesting? That may be the thin end of it – in 2014-15 Hunter Biden received US $850,000 from the intermediary company channeling the payments. In reporting on Trump being potentially impeached for asking about it, might you not expect some analysis – or at least mention – of what he was asking about?

That Hunter Biden received so much money from a company he never once visited or did any legitimate work for, located in a country which remarkably at the same time launched into a US sponsored civil war while his father was Vice President, is a question which might reasonably interest people. This is not “fake news”. There is no doubt whatsoever of the facts. There
is also no doubt that, as Vice President of the USA, Joe Biden secured the firing of the Ukrainian prosecutor who was investigating Burisma for corruption.

The story now is that Hunter Biden abandoned a laptop in a repair shop, and the hard drive contained emails between Hunter and Burisma in which he was asked for, and promised, various assistance to the company from the Vice President. This hard drive was passed to the New York Post. What the emails do not include is any incriminating correspondence between Hunter and his father in which Joe Biden agrees to any of this – which speaks to their authenticity, as that would be the key thing to forge. Given that the hard drive also contains intimate photos and video, there does not seem to be any real doubt about its authenticity.

However both Facebook and Twitter slapped an immediate and total ban on all mention of the Hunter Biden emails, claiming doubts as to its authenticity and an astonishing claim that they never link to leaked material or information about leaked material. 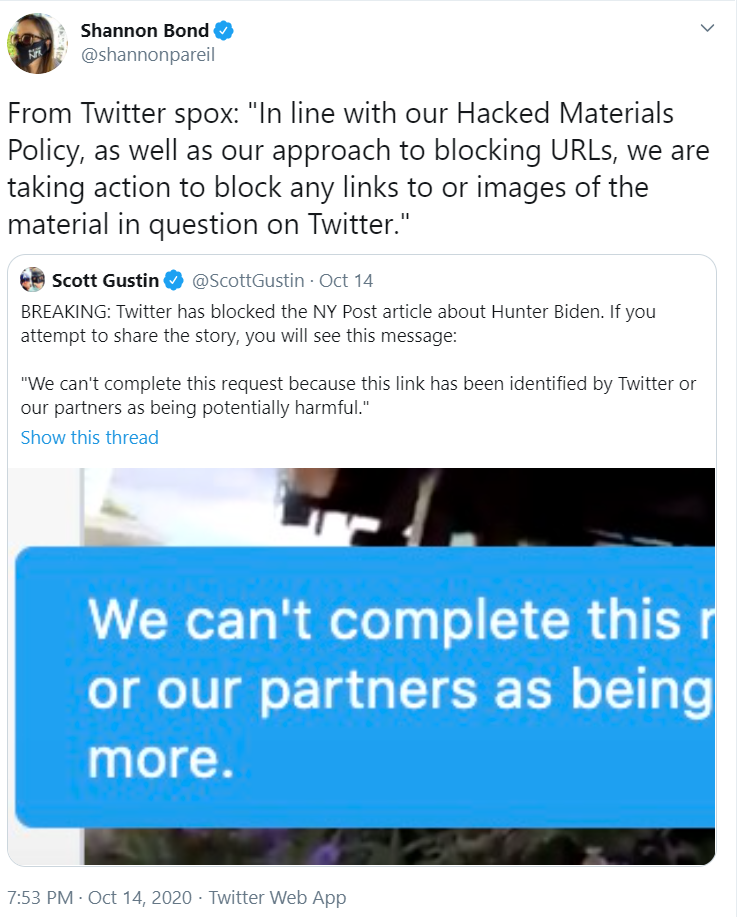 Alert readers will note that this policy was not applied to Donald Trump’s tax returns. These were extremely widely publicised throughout social and mainstream media – and quite right too – despite being illegally leaked. Twitter may be attempting to draw a distinction between a “hack” and a “leak”. This is difficult to do – the Clinton and Podesta emails, for example, were leaked but are frequently claimed to have been hacked.

I am astonished by the online comment of people who consider themselves “liberals” who support the social media suppression of the Hunter Biden story, because they want Trump to be defeated. The truth is that those in control of social media censorship are overwhelmingly Atlanticist figures on the Clinton/Blair political spectrum. That embraces the roles of Nick Clegg and Ben Nimmo at Facebook. It explains the protective attitude of Blairite Wikipedia boss Jimmy Wales (also a director of Guardian Media Group) toward the Philip Cross operation.

Censorship from the self-satisfied centre of the political establishment is still more dangerous, because more stable, than censorship from the left or right. It seeks rigorously to enforce the “Overton window” on social media. It has a “whatever it takes” attitude to getting Joe Biden into the White House and removing a maverick element from the political stability it so prizes. Its hatred of public knowledge is behind the persecution of Assange.

The Establishment’s problem is that inequalities of wealth are now so extreme in Western society, that the attempted removal of access by the public to radical thinking is not protecting a stable society, but is protecting a society tilting towards structural instability, in which the lack of job security and decent conditions and pay for large swathes of the population contrasts vividly with the spectacularly flourishing fortunes of the ultra billionaires. Our society desperately needs thinking outside the box into which the social media gatekeepers are attempting to confine us.

An early part of that thinking out of the box needs to relate to internet architecture and finding a way that the social media gatekeepers can be bypassed – not by a few activists, but by the bulk of the population. We used to say the internet will always find a work-around, and there are optimists who believe that the kind of censorship we saw over Hunter Biden will lead to a flight to alternative platforms, but I don’t see that happening on the scale required. Regulation to prevent censorship is improbable – governments are much more interested in regulation to impose more censorship.

The development of social media gatekeeping of internet traffic is one of the key socio-political issues of our time. We need the original founders of the internet to get together with figures like Richard Stallman and – vitally – Julian Assange – to find a way we break free from this. Ten years ago I would not have thought it a danger that the internet would become a method of political control, not of political freedom. I now worry it is too late to avert the danger.

403 thoughts on “People Need to Reclaim the Internet”