At the very beginning of the of the Skripal incident, the security services blocked by D(SMA) notice any media mention of Pablo Miller and told the media not to look at Orbis and the Steele dossier on Trump, acting immediately to get out their message via trusties in the BBC and Guardian. Gordon Corera, “BBC Security Correspondent”, did not name the source who told him to say this, but helpfully illustrated his tweet with a nice picture of MI6 Headquarters. 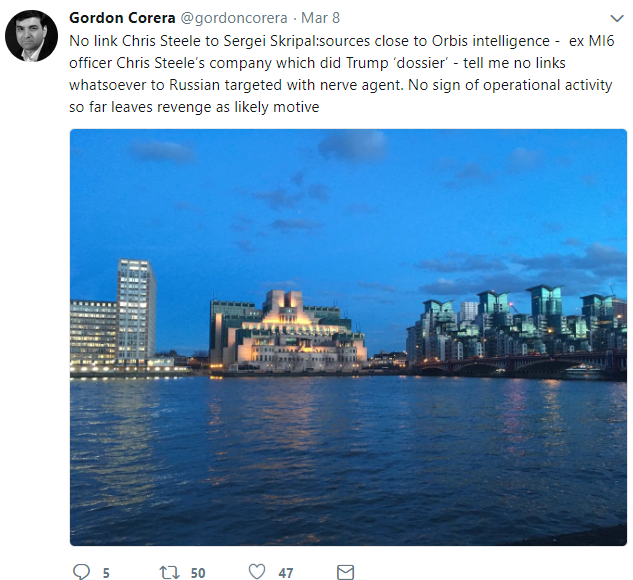 MI6’s most important media conduit (after Frank Gardner) is Luke Harding of the Guardian. 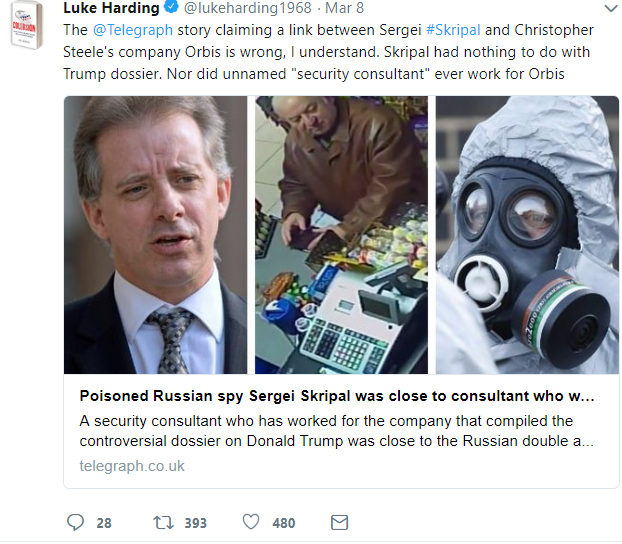 A number of people replied to Harding’s tweet to point out that this was demonstrably untrue, and Pablo Miller had listed his employment by Orbis Business Intelligence on his Linkedin profile. That profile had just been deleted, but a google search for “Pablo Miller” plus “Orbis Business Intelligence”, without Linkedin as a search term, brought up Miller’s Linkedin profile as the first result (although there are twelve other Pablo Millers on Linkedin and the search brought up none of them). Plus a 2017 forum discussed Pablo Miller’s Orbis connection and it both cited and linked to his Linkedin entry.

You might think that any journalist worth his salt would want to consider this interesting counter-evidence. But Harding merely tweeted again the blank denials of the security services, without question. 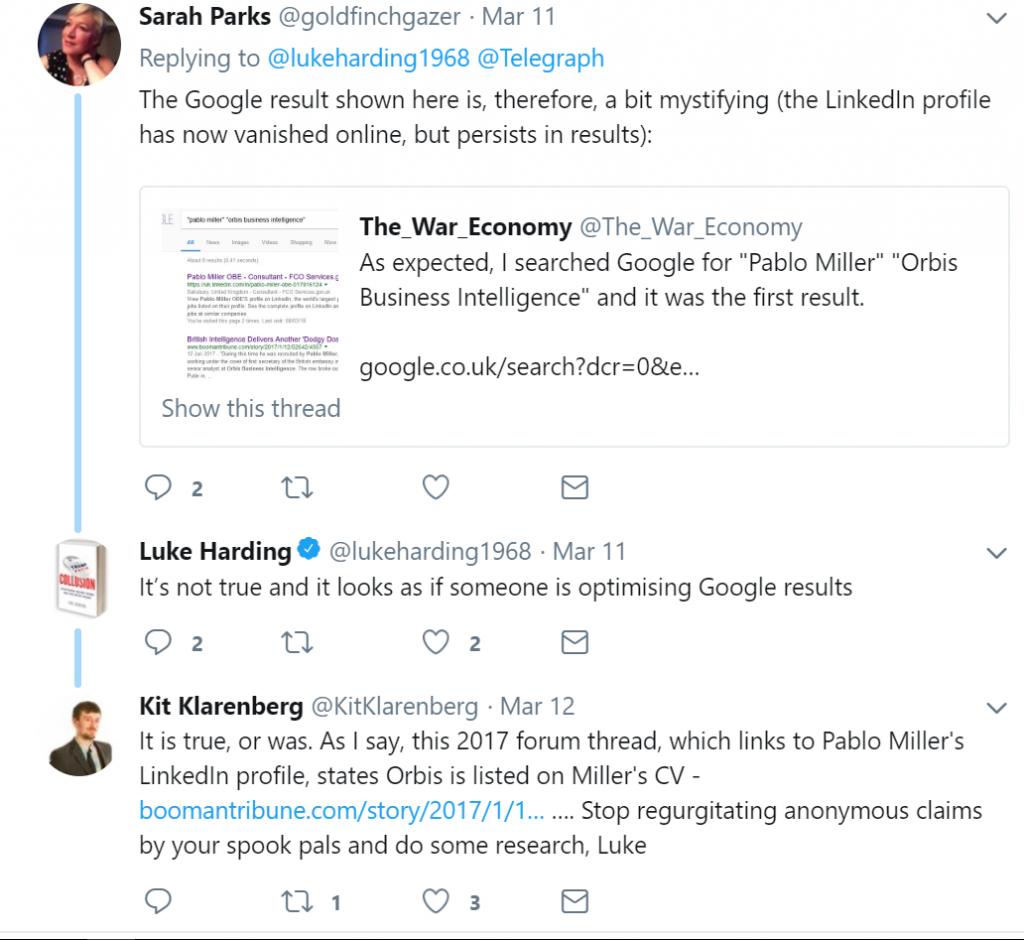 This is an important trait of Harding. Last year we both appeared, separately, at the Jaipur Literature Festival. Harding was promoting a book and putting the boot into Wikileaks and Snowden. After his talk, I approached him in an entirely friendly manner, and told him there were a couple of factual errors in his presentation on matters to which I was an eye-witness, and I should be very happy to brief him, off the record, but we could discuss which bits he might use. He said he would talk later, and dashed off. Later I saw him in the author’s lounge, and as I walked towards him he hurriedly got up and left, looking at me.

Of course, nobody is obliged to talk to me. But at that period I had journalists from every major news agency contacting me daily wishing to interview me about Wikileaks, all of whom I was turning down, and there was no doubt of my inside knowledge and direct involvement with a number of the matters of which Harding was writing and speaking. A journalist who positively avoids knowledge of his subject is an interesting phenomenon.

But then Harding is that. From a wealthy family background, privately educated at Atlantic College and then Oxford, Harding became the editor of Oxford University’s Cherwell magazine without showing any leftwing or rebel characteristics. It was not a surprise to those who knew him as a student when he was employed at the very right wing “Daily Mail”. From there he moved to the Guardian. In 2003 Harding was embedded with US forces in Iraq and filing breathless reports of US special forces operations.

Moving to Moscow in 2007 as the Guardian’s Moscow correspondent, others in the Moscow press corps and in the British expatriate community found him to be a man of strongly hawkish neo-con views, extremely pro-British establishment, and much closer to the British Embassy and to MI6 than anybody else in the press corps. It was for this reason Harding was the only resident British journalist, to my knowledge, whose visa the Russians under Putin have refused to renew. They suspected he is actually an MI6 officer, although he is not.

With this background, people who knew Harding were dumbfounded when Harding appeared to be the supporter and insider of first Assange and then Snowden. The reason for this dichotomy is that Harding was not – he wrote books on Wikileaks and on Snowden that claimed to be insider accounts, but in fact just carried on Harding’s long history of plagiarism, as Julian Assange makes clear. Harding’s books were just careful hatchet jobs pretending to be inside accounts. The Guardian’s historical reputation for radicalism was already a sham under the editorship of Rusbridger, and has completely vanished under Viner, in favour of hardcore Clinton identity politics failing to disguise unbending neo-conservatism. The Guardian smashed the hard drives containing the Snowden files under GCHQ supervision, having already undertaken “not to even look at” the information on Iraq and Afghanistan. The fact the hard drives were not the only copies in the world does not excuse their cravenness.

We know, of course, what MI6 have fed to Harding, because it is reflected every day in his output. What we do not know, but may surmise, is what Harding fed back to the security services that he gleaned from the Guardian’s association with Wikileaks and Snowden.

Harding has since made his living from peddling a stream of anti-Assange, anti-Snowden and above all, anti-Russian books, with great commercial success, puffed by the entire mainstream media. But when challenged by the non-mainstream media about the numerous fact free assertions on behalf of the security services to be found in his books, Harding is not altogether convincing. You can watch this video, in which Harding outlines how emoticons convinced him someone was a Russian agent, together with this fascinating analysis which really is a must-read study of anti-Russian paranoia. There is a similar analysis here.

Perhaps still more revealing is this 2014 interview with his old student newspaper Cherwell, where he obvously felt comfortable enough to let the full extent of his monstrous boggle-eyed Russophobia become plain:

His analogies span the bulk of the 20th century and his predictions for the future are equally far-reaching. “This is the biggest crisis in Europe since the Cold War. It’s not the break-up of Yugoslavia, but the strategic consensus since 1945 has been ripped up. We now have an authoritarian state, with armies on the march.” What next?

“It’s clear to me that Putin intends to dismember Ukraine and join it up with Transnistria, then perhaps he’ll go as far as Moldova in one way or another,” Harding says. This is part of what he deems Putin’s over-arching project: an expansionist attempt to gather Russo-phones together under one yoke, which he terms ‘scary and Eurasian-ist’, and which he notes is darkly reminiscent of “another dictator of short stature” who concocted “a similarly irredentist project in the 1930s”.

But actually I think you can garner everything you want to know about Harding from looking at his twitter feed over the last two months. He has obsessively retweeted scores of stories churning out the government’s increasingly strained propaganda line on what occurred in Salisbury. Not one time had Harding ever questioned, even in the mildest way, a single one of the multiple inconsistencies in the government account or referred to anybody who does. He has acted, purely and simply, as a conduit for government propaganda, while abandoning all notion of a journalistic duty to investigate.

We still have no idea of who attacked Sergei Skripal and why. But the fact that, right from the start, the government blocked the media from mentioning Pablo Miller, and put out denials that this has anything to do with Christopher Steele and Orbis, including lying that Miller had never been connected to Orbis, convinces me that this is the most promising direction in which to look.

It never seemed likely to me that the Russians had decided to assassinate an inactive spy who they let out of prison many years ago, over something that happened in Moscow over a decade ago. It seemed even less likely when Boris Johnson claimed intelligence showed this was the result of a decade long novichok programme involving training in secret assassination techniques. Why would they blow all that effort on old Skripal?

That the motive is the connection to the hottest issue in US politics today, and not something in Moscow a decade ago, always seemed to me much more probable. Having now reviewed matters and seen that the government actively tried to shut down this line of inquiry, makes it still more probable this is right.

This does not tell us who did it. Possibly the Russians did, annoyed that Skripal was feeding information to the Steele dossier, against the terms of his release.

Given that the Steele dossier is demonstrably in large degree nonsense, it seems to me more probable the idea was to silence Skripal to close the danger that he would reveal his part in the concoction of this fraud. Remember he had sold out Russian agents to the British for cash and was a man of elastic loyalties. It is also worth noting that Luke Harding has a bestselling book currently on sale, in large part predicated on the truth of the Steele Dossier.

Steele, MI6 and the elements of the CIA which are out to get Trump, all would have a powerful motive to have the Skripal loose end tied.

Rule number one of real investigative journalism: look where they tell you not to look.

967 thoughts on “Where They Tell You Not to Look”