Skip to content
Home » Posts » Uncategorized » Wow! Did We Really Just Do That? I find it hard to get my head round the fact that this is the little festival Jamie started nine years ago with a group of his schoolfriends and the money from an endowment life insurance I took out for him the day he was born. 2018 was the year Doune the Rabbit Hole finally attained critical mass, and everything went right. 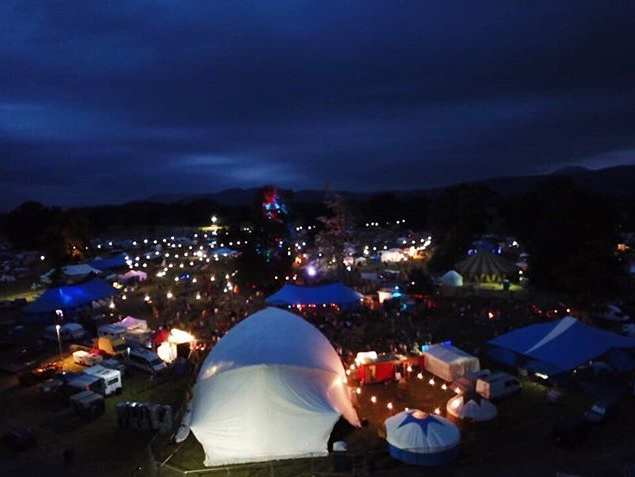 As the years go by, I have become more rather than less involved in helping run the show. I also have got older. I find that I am still capable of working like crazy for the week before and during the festival and averaging only three hours sleep a night for seven days. But what I can no longer do is recover easily from it. I have effectively been out of action for the last ten days, having come down with a sore throat and cough on the Festival’s last evening that simply will not go away, coupled with exhaustion. It is a hard thing to admit we are past our physical prime and on the slope towards extinction, but there we are.

I know some readers resent my taking time off from blogging to run music festivals, because some readers write and tell me so, but I am afraid it is an important part of what keeps me going, and while I am extremely grateful indeed to those who pay subscriptions to keep the blog active, it does not purchase any part of my life. Regular readers will recall that finally in December I got paid years of arrears for work done in Ghana. Well, I quixotically invested much of this – a six figure sum – to keep the Doune the Rabbit Hole and Eden Festivals going, both of which share the philosophy of being non-commercial with no sponsorship, no advertising and no rip-off pricing, and both of which were in danger of going under. largely due to 2017’s appalling weather.

Amazingly, the Scotsman got precisely what we are trying to do, in a four star review of DTRH 2018:

The atmosphere was, as ever, bohemian and laid-back, probably more akin to the free festivals of the 1970s than the corporately sponsored affairs which draw large audiences nowadays.

While this review from eFestivals picked up on an atmosphere which precisely matches my description before the Festival of why it is important to me and why I find renewal there (and no, I don’t know the author):

The reviews from people who just went along to enjoy have a similar vibe:

As a seasoned festival veteran (albeit I had not been at one since 2005) I have to say that I was totally blown away by this festival due to the intimacy of it all. Far removed from the commercialisation of big festivals, this was right down to earth, you could freely chat to most of the bands and it was easy to get up the front of crowd without having to maintain your position for the entire day!
The vibe was nice and friendly and as the festival goers were there to see the music rather than want the kudos of a Glastonbury Facebook check-in it was a lovely atmosphere…But, there is so much more to this event than simply the music. The boys (8 and 10) had a ball in the kids area, the free deckchairs that were scattered about sporadically were a marketing masterstroke and the bar sold a nice selection of cold local ales. (Added to this the free drinks for the children – a lovely touch)
We sang, we danced, we chilled. I even took in part of the World Cup final with the Levellers! What a memory that will remain. (again to highlight the intimacy of the event, the bands generally mingled with their fans rather than being penned in to a huge backstage commune far from the madding crowd)…
The support of local bands, up and coming bands and the sheer variation on offer meant it was a brilliant weekend loved by us all and we cannot wait to return in 2019. It was a triumph and I thank the organisers for a great show in a beautiful setting.

Doune the rabbit hole is an experience I would recommend to everyone.
What a fantastic weekend! Never have I seen so many happy people!
A super family friendly atmosphere. There’s lots for the kids to do. There’s showers if you don’t mind paying a little. Lots of space to lay about in the sun and relax.
The music was amazing, you are guaranteed to be dancing all weekend. There’s something for everyone.
The estate is beautiful too, so many trees to lay under or lounge around in deckchair.
I had such a brilliant weekend!

First time at this festival and it was absolutely brilliant. The toilets were always clean and never without toilet roll or hand sanitizer! the variety of seating available in the main arena was unlike any other festival I’ve been to. Great variety of music and alcohol available as well as food. Absolutely loved Pyroceltica and loved the night time camp fire. Fantastic atmosphere, everyone seemed friendly and it was a wonderful festival suited to all ages. I can’t wait to go back again next year!

My first time at DTRH and I was only there for the Sunday. I had a fabulous time though. Love that dogs and kids are welcome, love all the fun stuff laid out to entertain kids – and mostly for free. We took our son to Belladrum last year and everything cost extra money once you were in there so it was lovely to see it was only face painting and hugging an alpaca that cost here. I saw lots of very different bands and loved several of them. Lovely laid back vibe around the place, nice size of arena for the number of people. Hope to come back, with my son, in future

Felt like one big happy family in a field for the weekend. Great mix of music. Young & older, shoulder to shoulder sharing unforgettable festival experiences. Perfect introduction to festival life for our young daughter who had a whale of a time. Doune the Rabbithole put a lot of effort & imagination into the weekend resulting in a laid-back, thoroughly enjoyable time. An absolute treat of a wee festival

First time at DTRH which is surprising as live right next to site ! How to describe this wonderful little festival .. . Well as a late 30s gent who gave up my festival going after some fairly poor experiences at other events ( and a belief that I was getting on a bit and passed it ) my love of getting away from it all and listening to some good music is restored ! Doune is a family friendly ( and dogs so many lovely mannered four legged friends ! ) festival small in size but jam packed with character. From Friday to the Sunday night the stages offered something for every music taste or opportunity to create your own jam in one of the many tents dotted around the site where you could sit relax or get your groove on. Hammocks filled with giggling children or glorious deck chairs were a fantastic addition and offered somewhere to watch the unique and interesting characters that passed by or to fill bellies with the awesome food on offer notably the haggis man truck and gastro gorillaz ( seriously this was one of the best meals I’ve had at a festival ! ). We spent the majority of time between the campsite and main arena easily within walking distance and drama free throughout the weekend. The behavior of all in attendance was as chilled as the atmosphere. Never had an issue or witnessed anything concerning or that would have ruined your weekend ( and the toilets weren’t awful either ! ) In short will be back and highly recommend anyone who loves the festival atmosphere of old but without the drama to attend as you’ll definitely find something at DTRH that will bring back those memories of how good it used to be and can apparently be again ! Great job

There are many more, but I trust that it comes across that this event is about the people and the way they interact socially – in a “pop-up society” that is kinder than our normal one – and thus it gives a glimpse of society’s potential. This year it felt like we succeeded in doing precisely what we set out to do. I am extremely grateful to the readers of this blog who came along to work as volunteers with me in the bar or elsewhere, or just to take part in the festival – I was approached by scores of people including from Moscow, Warsaw and Berlin! Happily everyone seemed to “get” that it was about lifestyle not about political analysis.

I should love to be able to tell you that bands react to the non-commercial nature of the festival by charging us less than their full commercial rates, but sadly that would be untrue, and the artists always hide behind their agents. Supporting musical talent is of course a key aim, but I have to confess I worry sometimes that we have people working many hours – often weeks – for love of it, while some chap turns up, strums a guitar for 45 minutes and walks away with thousands of pounds. But I suppose that is the nature of talent. On the positive side, they do almost all react by chilling out and joining in with everyone else when not performing.

So, for those wondering why articles are few and far between lately, there is your answer. I continue to live a very full and varied life. I just need to pace it a little better!