I retain the belief that the motivations of Bernie Sanders’ voters – a fair society with decent pay, healthcare, working conditions, immigration justice and the ultra wealthy paying their share – will not be affected today by the massive media hype of the right wingers coalescing around the corrupt and inept Joe Biden. I therefore expect that in 24 hours Bernie will be well down the path to becoming the Democratic nominee.

I should like to believe that the leaked DNC emails of four years ago will yet have a vital effect. By exposing the way Hillary and the DNC rigged the primaries and cheated Bernie out of the nomination last time, they have already made people far more alert for procedural cheating this time. That background will also make it far tougher for the right to mobilise unelected superdelegates to undemocratically prevent Bernie from getting the nomination. It is not a good look to cheat him again. If people did not know about the hidden cheating last time, fixing the Convention would be a simpler sell.

I maintain the hope that the novel coronavirus will prove less virulent and less potent than generally feared. If I am wrong, the USA will shortly experience the massive difference in ability to control an epidemic when ordinary people are not covered by an adequate public health service. Similarly, we in the UK will understand that the Tory policy of running the NHS at 99% capacity as a norm is ridiculously improvident; the expense of carrying a substantial spare capacity for emergencies ought to be part of any decent planning, a principle which has been scandalously neglected.

Here is an interesting irony for you. Almost everybody on the left in the UK, and certainly anybody who has expressed the slightest concern at the appalling repression of the Palestinian people, has been slurred and falsely abused as an anti-semite these past four years. Yet every friend of mine who has been falsely slurred as an anti-semite is, like me, rooting strongly for Bernie Sanders to become the first Jewish President of the United States. Meanwhile the Guardian, which in the UK has led the charge against the left with an average of over 8 articles a week in 2019 accusing left wing figures or the left in general of anti-semitism, is pulling out all the stops to prevent Bernie becoming the first Jewish President of the United States.

The Guardian has rebranded as Joe Biden News. When Kath Viner became Editor it targeted the Clintonite identity politics right for its much needed online revenue increase. Last night its US Politics livestream ran 16 straight items gushing about Joe Biden, his rallies and his endorsements from Buttigeig, Klobuchar and a stream of other irrelevant right wing figures. 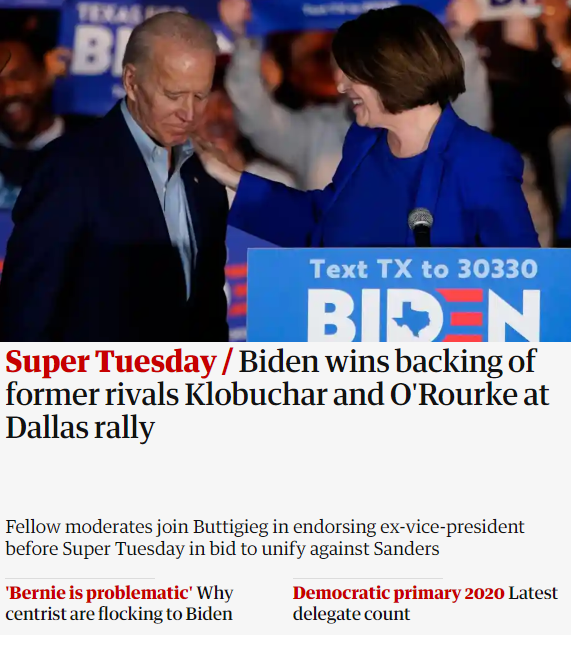 I am personally pleased that the right has finally settled on the hopeless Biden as its standard bearer. I wonder if we will now be allowed to ask why Burisma paid Hunter Biden $850,000 to be non-executive director of a Ukrainian gas company which he never even visited? It is a fine example of the complete departure of rationality from political life that, even when appalling corruption is laced with geopolitical implications touching on issues of war and peace, you are not allowed to point out the stinking mess without being labeled as a supporter of Trump.

Finally, after the Russiagate 2 “Bernie is a Russian Puppet” effort fell rather flat, those united US intelligence agencies are still attacking with a message which scarcely pretends to be anything other than an attempt to damage Sanders by gross libel and insinuation. The curious involvement of Pompeo and Barr in this tells us one thing fairly plainly. Trump would much prefer to face Biden than face Sanders. He is of course right. If the Democrat establishment block Sanders in favour of another bought and paid for Wall Street puppet, they will end up with Trump until 2024 – and then Ivanka.