Every fact I reported from the Assange hearing was just that, a fact. Nobody, anywhere, has made a single claim that anything I reported to have happened, did not happen. Yet the mainstream media simply did not report 99% of the facts of the case which I reported.

Then realise this. For all the key evidential parts of Alex Salmond’s trial, the public and citizen journalists will be excluded and only the MSM will be permitted to be there. How thorough, how accurate and how fair do you think MSM reporting of the case will be? The MSM hate Alex Salmond as a danger to the status quo, just as they hate Julian Assange.

At least for the Assange trial I could queue from 6am and get in with the public. The public will themselves be excluded from the Salmond evidence sessions. I went to the court on Thursday and was told not to queue on Monday as there will be no parts of the trial open to the public that day. I was told to queue from early Tuesday morning with the possibility of a brief admission to the courtroom for the public at some point on that day, by no means guaranteed.

I have therefore applied to be admitted to the trial as a journalist. This is the email I sent to the courts service. I apologise that circumstances compelled me to blow my own trumpet, but the application is quite true if embarrassingly immodest. I am indeed the most widely read journalist resident in Scotland. The fact my journalism does not reach its audience by the medium of dead trees, or by TV news broadcast to an ever-shrinking audience of gullible old people, does not change that.

I am arguably the most read journalist resident in Scotland. We have undoubtedly the most popular and most read new media website in Scotland, https://www.craigmurray.org.uk.
Our regular readership is higher than the regular readership of the Scotsman or Herald, and on a good day higher than any Scottish newspaper. I have 75,000 followers on Twitter.

Last week our daily coverage of the Julian Assange hearing reached many millions of readers all around the world.

Your Man in the Public Gallery – Assange Hearing Day 1

Many hundreds of thousands followed the hearing on my own website, and in the English language the article was republished on hundreds of websites worldwide, as proven by a google search of an unique exact phrase from the article, which gives 869 returns
.
My Assange hearing articles last week were in addition translated and republished in languages including French, German, Spanish, Catalan, Portuguese (Iberian and Brazilian), Norwegian, Japanese and probably several others of which I do not know.

It is not just a question of quantity. This is reporting of the highest quality. My Assange case reporting was commended in the strongest terms by some of the UK’s most famous journalists, including Guardian editor Alan Rusbridger 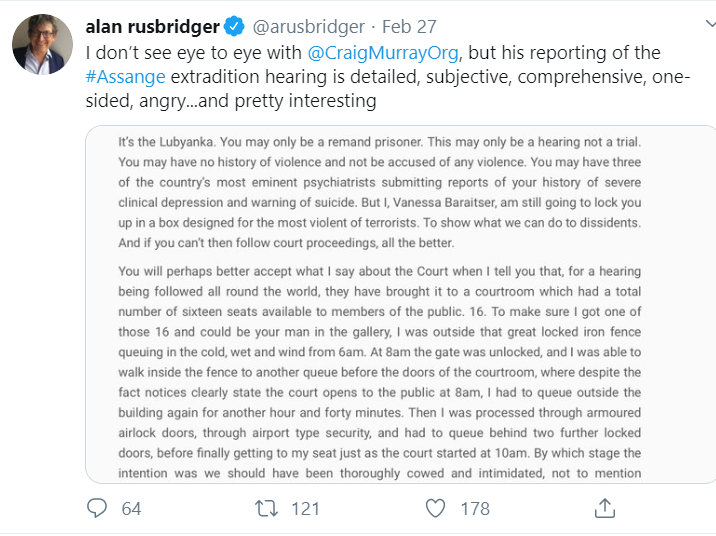 I would therefore be grateful if you would organise media accreditation for me to cover the Salmond case. In the modern world, the best journalists and those with the biggest audiences no longer work for the corporate or state media. Plainly, I am a journalist.

The response to my email was of course to send me a form to fill, and that form made absolutely plain that it expected “journalists” to be from the established corporate and state media. Amusingly it also said the media organisation must have “balanced journalism”. That is of course another lie by the authorities. They have accredited the BBC, Sky and the Daily Telegraph, for example. They have not the slightest interest in balance, merely in excluding non right wing thinkers.

I still await a decision. If my accreditation is not accepted, my ability to report proceedings will be severely constrained. My strong suspicion is that being a good and accurate reporter with a wide international readership will appear to the authorities precisely the grounds on which they should try to exclude me. If excluded, I will provide what reporting I can, in any event, and gain entry at least to that part where the public are admitted, while finding ways to report what I cannot directly witness: I already know a great deal more than I am permitted to tell you about the facts of the case.