CORRECTION I published in error that 73% of those who know identities of Salmond’s accusers learnt them from mainstream media. The correct figure is 66%. I aggregated broadcast and newspapers but these were not exclusive questions. In fact the percentage of those in the know who cited broadcast, newspapers or both as their source was 66%.

We are looking for potential witnesses who would be willing to give a sworn statement, and if necessary swear on oath in court in my trial for contempt, that they followed my reporting of the Alex Salmond trial and were unable to work out any of the identities of the accusers from my reports. It is particularly helpful if you can say more than this in one of two ways:

Firstly, if you can say you were unable to work out who the accusers were from my accounts, despite yourself possessing some specialist knowledge, that would be helpful. Such specialist knowledge might include having held office in the SNP, having dealings with Alex Salmond and his staff, or having been a relevant civil servant.

And/or secondly, if you can say that you were unable to work out any of the identities from my reporting, but were able to do so from other reporting, and name the source.

I hope it goes without saying that I only want people to come forward who can genuinely do so in truth, and be prepared if necessary to swear to that.

I was very careful in my reporting not to “out” any of the identities, and I am happy to say that I can now prove that I had no significant effect on popular knowledge of the identities of the failed accusers. I took the unusual decision to commission an opinion poll on the subject from Panelbase, one of the UK’s leading pollsters. This was made possible using funds you provided with the defence fund, and I hope you will agree it is money well spent. We will seek to submit the poll as evidence in court.

You should realise this was at risk. I was committed to publishing the poll, whatever its results. If it came out saying that only a few people knew the identities, and they all learnt them from Craig Murray, I would have had to admit to that. But in fact, this is not what the poll shows at all.

It is important to note that my questions were an add-on to a Panelbase poll using their absolutely normal methods for sampling Scottish public opinion. They surveyed 1086 people and applied their standard weightings to the results.

The finding is stunning. 8% of the adult population of Scotland believe they know the identity of one or more of the failed accusers. That means over 350,000 people know, or believe they know, identities.

Of these, 74% learnt the identities from TV and newspapers. 29% learnt from independent websites or blogs. 19% learnt from friends or contacts. (You could of course learn from more than one source so this adds to more than 100). 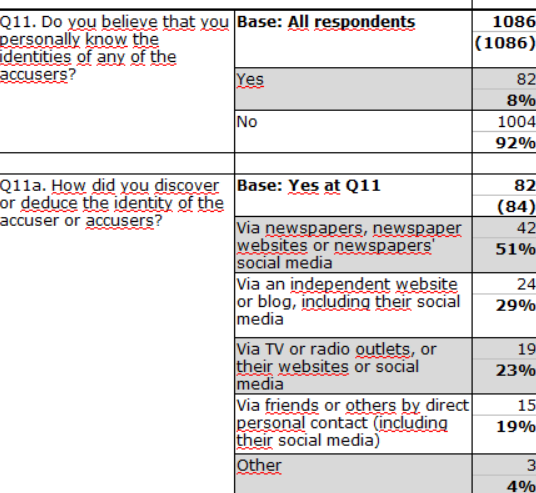 We then asked an open question, giving people the opportunity to name the specific media from which they learnt the identities. There were a limited number of responses, so I give here the number of people who named each source rather than dress it up as a percentage:

Can you name a specific broadcast, newspaper or website source from which you learnt or deduced the identities? (there were no prompts, an open answer)

Can you name the specific journalist or blogger you had learnt or deduced identities from? (There were no prompts, an open answer):

(Nobody actually replied Craig Murray or John James to this question, but given each had his blog mentioned once as a source it would probably be fair to add both with 1 each).

Dani Garavelli tops both lists, because her article on the case was published in Scotland on Sunday. As that is the Sunday edition of the Scotsman, that unionist rag is well ahead as the prime source of knowledge, with the Murdoch stable of the Times and Sun combined not far behind.

Plainly, it is unsatisfactory from the point of view of the law that 350,000 people know identities. Something which 350,000 people know in Scotland is not a secret, and has achieved the critical mass required for anybody who actually wants to know to be able to find out just by asking around. I strongly suspect that the large majority of those who do not know, do not wish to anyway.

But equally plainly, it is not my fault that 350,000 people know. It is overwhelmingly down to the mainstream media, as the poll shows. The simple truth is that, in a trial where a number of very politically powerful figures conspired together to bring false charges against one of the most famous people in Scotland, anonymity was always going to be extremely hard to protect. You can’t expect it to work as it rightly would in protecting the identity of a worker in Dundee attacked by a stranger. The poll shows that it did not work; and it proves that is not my fault.

I assume the single individual who mentioned me as the source was acting in good faith – though it is worth noting that the polling was carried out after every newspaper in Scotland had run the story that I am being prosecuted for contempt of court for revealing identities.  In that circumstance, that I am not more prominent is remarkable and must reflect a truth.

The charge of “jigsaw identification” is very difficult to refute. As soon as you publish anything at all about the evidence in a case, there is of course the chance that is the last piece of information that an individual with particular knowledge needed to work out an identity. Let me put if this way. If the jigsaw is a face in 1,000 pieces, if your information contributes 12 pieces out of 1,000 you may think you revealed nothing. But you cannot guard against the person sitting at home who already has 800 pieces and can make a guess now your 12 filled in an area.

Nobody can look at the above data and say that the obvious course of justice is to prosecute Craig Murray and nobody else. Is there a single person who honestly believes that it is a coincidence that they are prosecuting the only journalist who fairly reported the defence case against this government led fit-up? That they have chosen to prosecute the political dissident and whistleblower and not the mainstream media who were collectively responsible for far more identification? The selectivity of this prosecution represents an Article 6 abuse of the European Convention on Human Rights.

There are of course two strands to the indictment against me, insofar as anything can be deduced from that incoherent document. One is jigsaw identification. The other is reporting likely to influence the trial. I have just demolished the first strand; you cannot possibly prosecute me and not the mainstream media. I refuse to take the second strand seriously. If they genuinely believed my reporting could influence the trial, they had a public duty to take action before or during the trial, not months afterwards. This is very plainly a political persecution.

A final note. With over 5,000 people having contributed to my defence fund, I do hope you will forgive the lack of personal replies to thank you. I am really quite overwhelmed and humbled by your kindness.

You should also know that, as it was never my intention to identify anyone, I have pending the outcome of my trial temporarily censored those sentences in my articles complained of by the prosecution as causing jigsaw identification, even though I strongly deny that they do. Prior to receiving the indictment, I had no idea precisely what the complaint referred to.  I have also censored the indictment of its references to the same material. I do not believe there was any problem with the originals; but it is a very few sentences and my lawyers rather insisted. I hope you will not feel I am too cowardly in this.

I have refused to censor those larger passages the Crown complain of where I state that the charges were a fit-up and a state sponsored conspiracy. I believe here there is a vital argument of freedom of speech, and I will not bend.

356 thoughts on “A Very Political Prosecution”