Exactly thirty years ago I was Head of Maritime Section at the FCO and negotiating the voisinage agreement on mutual fishing rights in territorial waters between France and the Channel Islands. Memory dims with age, but it is hard to forget the evening in Cherbourg where a meeting with French fishermen became so heated we found ourselves diving into an alley to escape a pursuing group who wished to remonstrate further. In fact, the same fishermen in the same town three years later took hostage, for a day or so, British fisheries enforcement officers, which helped obtain some changes to the agreement in France’s favour in 1994. In 1991, the ire was directed not so much at me, as at the head of the French government delegation, an Enarque from the Quai D’Orsay of superb aristocratic demeanour and French Vietnamese ancestry, who was perhaps not the best choice to explain things to the fleet.

It should be noted that the later British “hostages” said they were fed and wined superbly and had rather a nice time of it.

It is hard to understand whether today the British media or the British government have the worse grasp of the issues at stake in this fisheries dispute. Let me make a few basic points.

Secondly, the issue dates back hundreds of years and is concerned with the maintenance of traditional fishing rights within each other’s waters by the French and Channel Islands fishermen. Both sides have always acknowledged these time hallowed rights of access.

Thirdly, the French and Channel Islands fishing communities concerned are inextricably interlinked and indeed intermarried. Certainly thirty years ago French was the first language among the fishermen on both sides (though I am told this is less true now).

To try to explain further, fishermen are taking specific types of catch in specific areas, and their boats are equipped for this. They cannot simply be told to go and catch something different in their state’s “own” area without changing equipment and indeed sometimes boat. To state the obvious, if you are putting down your lobster pots it is not easy to be told to go fish for mackerel somewhere else instead. That is the principle, though I don’t pretend to remember the catches now.

It is not just a technical and financial matter. It is a question of personal identity and survival of communities. Fishing families have been taking the same catch in the same areas for many generations. The boats are inherited, the community set up for the appropriate processing and sales.

In making the voisinage agreement we took care to interact very closely with the fishing communities on each side and learn their stories and history. We heard tales of catches going back centuries, and fishermen viewed access to the sea their fathers had fished as a right that was nothing to do with governments; this was very even. Some Channel Islands fishermen fished certain French waters, and some French fishermen fished certain Channel Island waters. We also heard of bitter disputes between families. Tales of nets cut or pots lifted were recounted with vivid detail, only for it to be subsequently revealed the incident was in 1905 and it was somebody’s great grandfather who did it. These are complex and intermixed communities, and there is rivalry between islands as much as with the French communities. There are cross-cutting community alliances too.

These are proud communities. The monumental stupidity of the Tory government in not seeking to understand and talk through the issues, but rather sending in intimidatory gunboats and wildly exacerbating the dispute, is heartbreaking. Of course I understand the Tories don’t actually care about the issue at all and are using anti-French jingoism for electoral purposes, but the poison they have injected will have effects for many decades.

The voisinage agreement that was drawn up and signed off by Exchange of Note between ministers in 1992 (which really did involve me doing stuff with ribbons and sealing wax) was therefore perhaps not what you would expect to see, and bore no relation to the simplistic nostrums being discussed about the dispute this morning. It named specific individual fishing boats, it named individual captains, and detailed exactly where they could exercise their family’s traditional rights to fish. There were “grandfather rights” – inherited, traditional rights that could not be achieved by newcomers. There was the right to replace a boat, but specific and individually tailored limits of the size and type of boat it could be replaced with. There were sunset clauses – I have a recollection many of the rights expired to be renegotiated in 2010, which seemed a long way away in those days. I believe that much of “my” voisinage agreement was replaced by the Granville Bay Agreement of 2000, which sounds to me unwise in decoupling French rights in Channel Island waters from Channel Island rights in French waters, but I was Deputy High Commissioner in Ghana by then and I confess I have not studied the Granville Bay agreement.

The political right today misinterpret this as some kind of English/French territorial dispute. As I hope I have explained, it is nothing of the sort, and none of the fishermen involved would ever call themselves English. The political left must not confuse the fishermen with the beneficiaries of the Channel Islands status as a great international centre for tax evasion and the laundering of illegal money. The beneficiaries of that activity are overwhelmingly not in the Channel Islands at all, but spivs in the lap dancing clubs and penthouses of the City of London. There are few beneficiaries in the Channel Islands beyond the sleazy lawyers who host thousands of paper companies, the political crooks and the token bank facades fronting for London. The fishermen are nothing to do with that world.

I should make very plain that my own negotiations were guided and in reality led by David Anderson, FCO legal adviser and a major influence in the development of the Law of the Sea. But empathy is an essential negotiating skill, and I was much helped by the fact that I grew up myself in an inshore fishing community and from a fishing family. As you may know, my mother was English and I was born in West Runton and grew up in neighbouring Sheringham. My great grandfather John Johnson had been one the last builders of traditional Sheringham fishing boats, and many relatives were still fishing in my childhood. To give you an idea, I have four direct ancestors in this photo of the Augusta lifeboat, including the cox’n at the stern, who is my great, great grandfather John Long. My grandmother had a copy of this postcard and used to tell me we were related to every single man in the photo (which is what is known as NfN, Normal for Norfolk). She could name them all. I believe six generations later my cousin Nick Grice is today still cox of the Sheringham lifeboat. 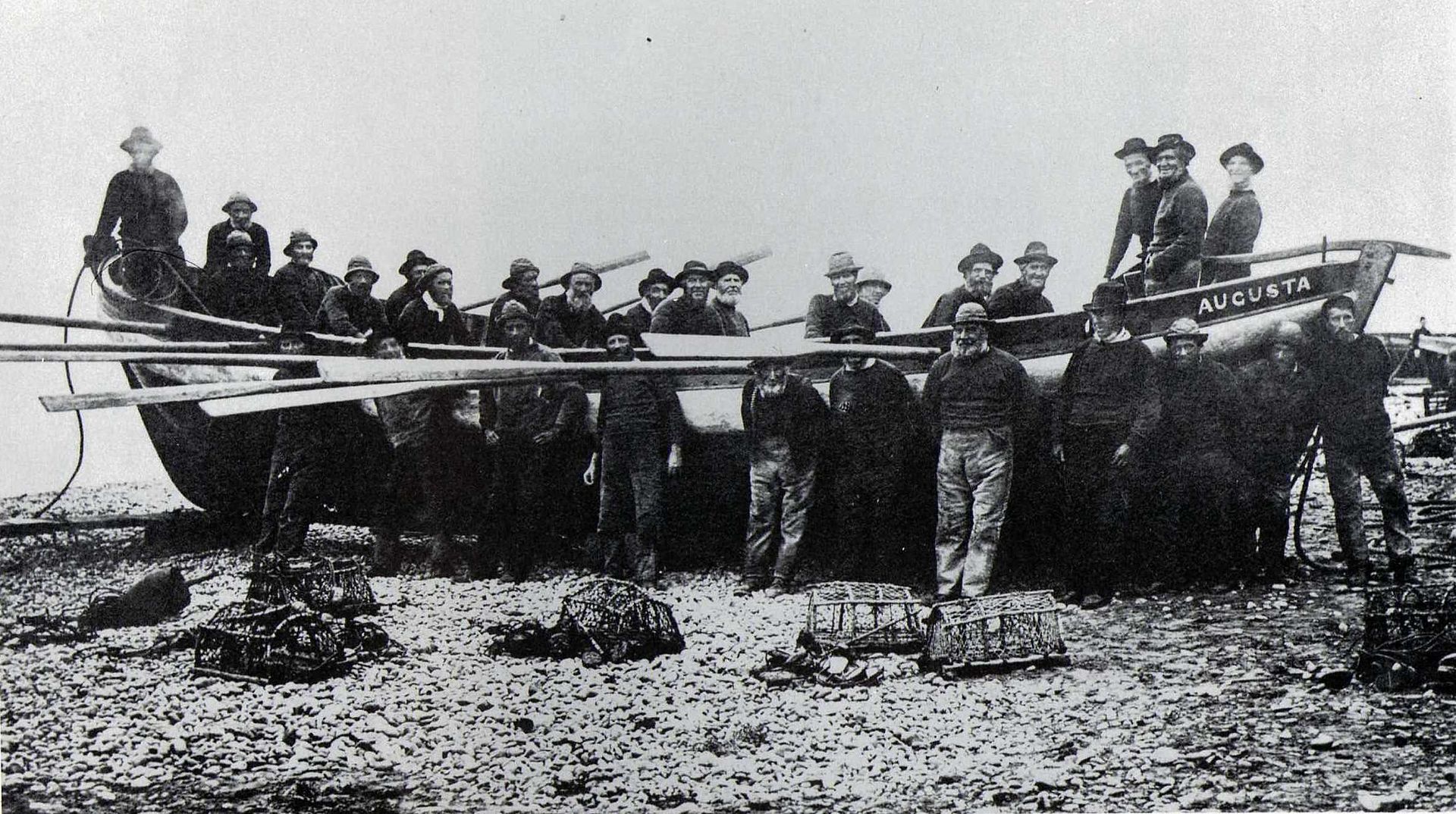 I shall allow myself to be a bit morbid today. The UK used to have an envied foreign service which valued expertise, diligence and negotiation. It now prizes bluff, jingoism and cheap popularity. We are sending gunboats, not negotiators, to the Channel Islands. Meantime I am being sentenced, probably to prison, this morning for Contempt of Court, for the crime of diligent journalism. O Tempora! O Mores!

You can read something of my case and contribute to my defence fund for an appeal to the Supreme Court here.

UPDATE: The court has been adjourned until Tuesday 11 May at 9:45am, (ostensibly) to enable consideration of mitigating factors submitted this morning. Read Taylor Hudak’s summary of the court hearing here and consult her timeline for a record of her live tweeting as it happened.

98 thoughts on “Channel Islands Fisheries and Abuse by Tory Jingoism”