Kenmure Street stood outside UK law yesterday, as Westminster legislation on immigration, opposed by the people of Scotland, could not physically be enforced by agents of the state. What the people did was gloriously, joyfully illegal. Its illegality must be embraced, not skated over by politicians worried at the precedent of people power. 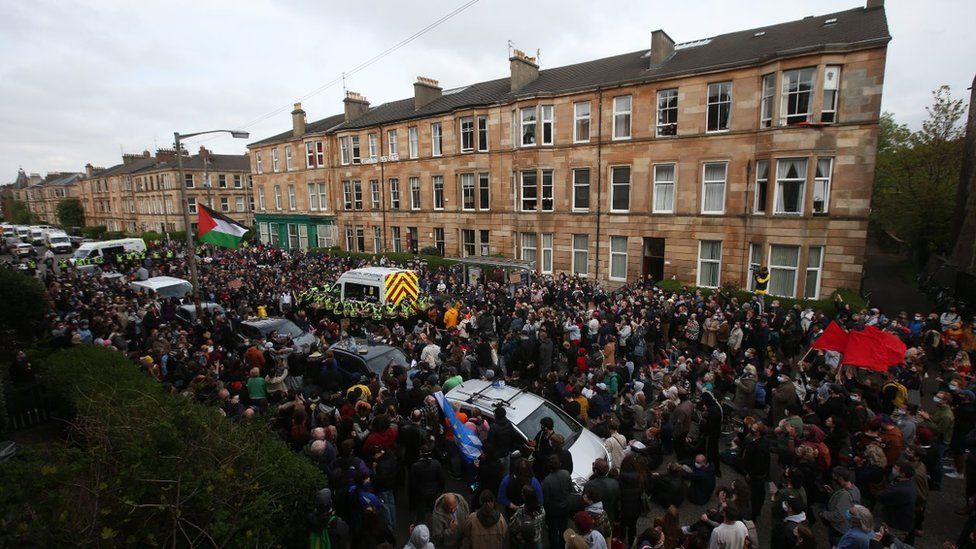 Scottish cities have a history of social solidarity, and in my lifetime I remember similar scenes over warrant sales and poll tax, and of course roots of popular resistance in Glasgow can be traced back through Tommy Sheridan, Jimmy Reid and John MacLean. But there is, undeniably, an added element of nationalism here. The handmade banners decrying “Team UK” in Kenmure St and the active presence of the SNP’s Roza Salih in a community leadership role, will both be seen as significant in an event which future historians will rightly view as a socially important step on the road to Independence.

There is a strong understanding that this is English oriented immigration law and English racist attitudes towards immigrants, being imposed on a Scotland which feels very differently. Indeed, the contrast between Kenmure Street, and the Labour electoral collapse in Northern England as their voters turn to more open panderers of anti-immigrant snake oil, could not be stronger. It is a part of why Labour in Scotland is doomed until it embraces Independence.

But Kenmure Street is an example in a much wider way. I have repeatedly explained, in detail, that Scotland has the right to self-determination in international law. which specifically states that right cannot be constrained by the domestic legislation of the state from which you are seceding. Otherwise Latvia would still be Soviet and Slovenia would still be Yugoslav. Westminster legislation and its Supreme Court cannot override Scotland’s right to self-determination. It is an inalienable right.

The UK state will never accept the great loss to its resources that would result from Scottish Independence. Scottish territory, seas, military bases, renewable energy, water, minerals, food products, financial institutions, education, and above all “human capital” to exploit, are all viewed as essential to London.

Keeping Scotland is the most vital of all UK national interests. As I have explained till I am blue in the face, David Cameron only agreed the last referendum because at the time Independence stood around 28% in the polls and the UK state apparatus believed the referendum would destroy and humiliate the very idea of Independence. Instead of which, the astonishing Alex Salmond brought it to the brink of achievement.

Where it has hovered ever since.

That is why there will never be another referendum agreed by Whitehall. Even if Johnson wanted to agree (which he doesn’t), the security services, military and other power structures of the UK Establishment would prevent him.

Nor can Scotland, “legally” in terms of UK law, hold a referendum without agreement. The UK Supreme Court has already explicitly held that Westminster is sovereign, in its ruling that the Sewell Convention has no force in law. If, as she suggests, Nicola Sturgeon leaves it to the courts to decide if a referendum without a S30 is legal, I have no doubt whatsoever – not even 0.000001% uncertainty – that one of two things will happen.

(1) Either the Supreme Court will rule that, under the current Scotland Act, an advisory referendum on a reserved matter is illegal without Westminster agreement;
[I think that would very probably be the ruling; ultra vires expenditure]

(2) Or the Tories will simply amend the Scotland Act to specifically outlaw the referendum, which the UK Supreme Court will certainly uphold because of their established doctrine that sovereignty resides in Westminster.

How do you do that? I am constantly told this is impossible, that the UK state will act to prevent it happening. Well, we saw the answer in Pollokshields yesterday, and very plainly. The British government cannot enforce its law on the streets of Scotland if the people of Scotland reject that UK law and its enforcers. Yesterday there were riot shields, helmets, long batons, horses, and all the panoply of repression on display, and all of that could not take two men out of the community, against the will of the people.

I can’t tell you exactly how it will happen. Kenmure St crowds may be protecting polling stations, may be protecting the parliament. But happen it will. The people of Scotland will take Independence sooner than people realise. We will not just wait on Boris Johnson or the UK Supreme Court for permission. Come it will for a’that.

307 thoughts on “Pollokshields Shows How To Achieve Independence”