UPDATE: Julian Assange – Looking through my photos, I just came across this one of Stella showing the panel on which Vivienne Westwood embroidered her personal wedding message to the couple. I thought you might like to see it. 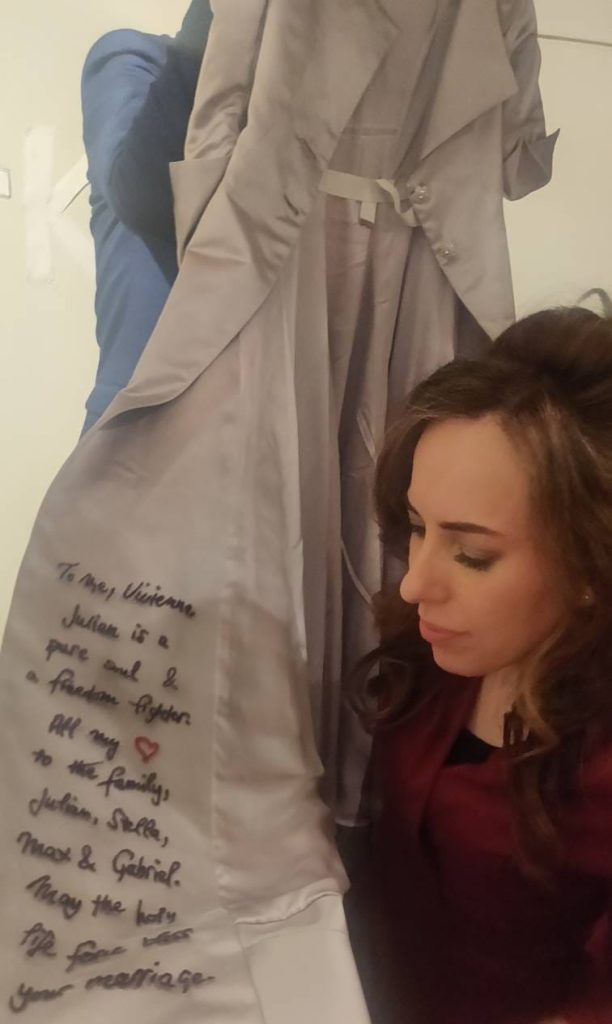 It was a cheap, white, trestle table, its thin top slightly bowed down in the middle, of the type made of a weetabix of sawdust and glue with a sheet of plastic glued on top and plastic strips glued to the sides, held up on four narrow, tubular, black metal legs. On it was a register. In front of it stood Stella Moris, looking beautiful and serene with delight. She wore a stunning gown in a light lilac, designed for her by Vivienne Westwood. It had a mild satin shimmer, and appeared both sumptuous and tightly tailored, with an expansively lapeled jacket section diving in to a wasp waist, that the apparently soft billows never intruded upon, no matter how she moved.

Close up, the details on the dress were extraordinary. The cloisonne buttons were uniquely designed and commissioned by Vivienne for this gown, and she had herself embroidered a message of solidarity, love and support on one panel. The long veil was hand embroidered, with bright multicoloured words striding across the gauze. These were words chosen by Julian as descriptive of the Power of Love, and they were in the handwriting of close friends and family who were not able to be inside the jail, including Stella’s 91 year old father. I am proud to say one of those handwritings was mine, with the word “inexorable”. It really was embroidered on looking exactly as I wrote it, as witness the fact nobody could tell what it said. Julian’s chosen motif for the wedding was “free, enduring love”. 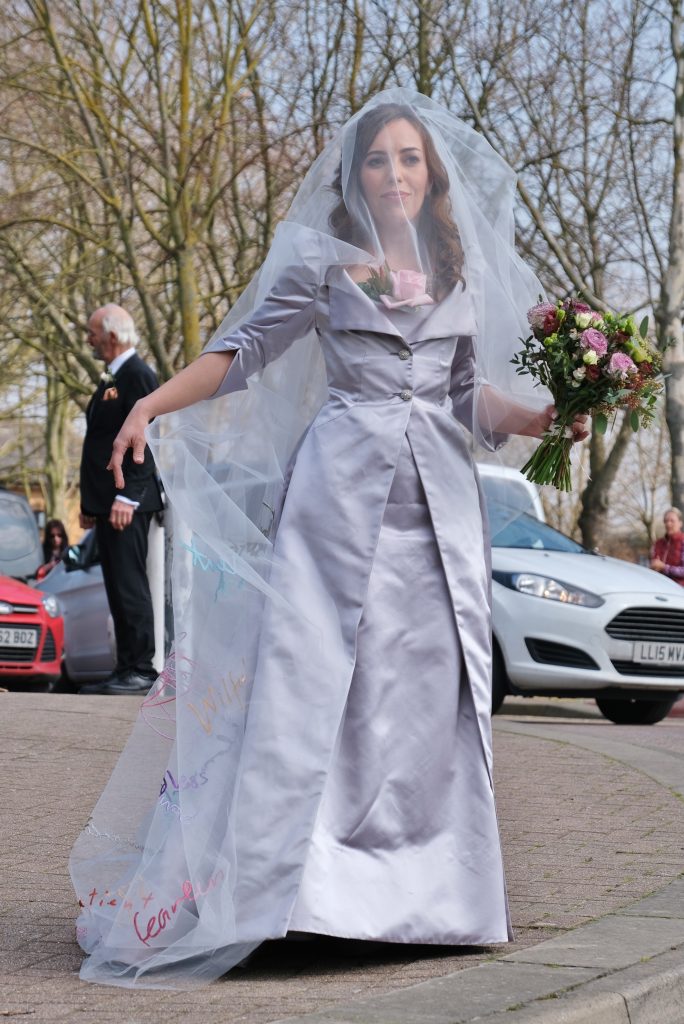 Stella in the dress, with Julian’s dad John in the background. Photo: Isabell Jezek

By Stella’s side stood Julian Assange, whom she described to me as “simply the love of my life”, outfitted in a kilt, shirt, tie, and waistcoat, again specially designed by Vivienne Westwood in a purple based tartan, and featuring hand embroidery, lacing and cloisonne buttons. Unlike Stella’s dress, which she later showed us in detail, I have not seen the kilt but am told the design is relatively traditional.

There was a two minute delay at the start of the ceremony as Julian had no sporran, and his brother Gabriel, resplendent in full highland dress for the first time, removed his own sporran and put it on Julian. Both Julian and Gabriel are proud of their Scottish heritage, in each case through their respective mothers.

The British authorities had done everything they could firstly to prevent, and then to mess up, this wedding. Permission to marry had first been formally requested of the prison service in 2020, and in the end was only granted by involving lawyers and threatening legal action. There followed a whole list of antagonisms on which I shall not dwell, one minor example of which was banning me from the wedding and then lying about it.

But now, on the wedding day, the ordinary, working staff of the prison were delighted to be hosting such a happy event. The searches of the bride were distinctly token and friendly. At the security checks, Julian and Stella’s three year old son Max managed to tangle himself so comprehensively around the legs of one guard that he fell over, and the large guard and small boy then had a hilarious mock wrestle on the floor. The guards who conducted Stella through the jail did so as though they were the escort of a Queen.

Gates and steel doors opened before the procession and were locked again behind them, until deep in the bowels of this maximum security prison they arrived in a banal room, oppressive and completely windowless, with plain magnolia emulsioned walls. It was about twenty feet by fifteen feet, and is used as a store room for the adjoining Chaplaincy. At the back of the room were piles of Muslim prayer mats, boxes of red-jacketed Christian hymnals, stacks of cheap chairs and folded trestles.

From which that one cheap trestle had been set up, and a single row of eight chairs in front of it. Present were Julian and Stella, and their permitted limit of six invited guests. These were Stella’s mother Teresa and brother Adrian, Julian’s father John, brother Gabriel, and Julian and Stella’s two children, Gabriel (4) and Max (3). One of the torments had been that the UK Ministry of Justice insisted that the two tots counted against the six person limit, contrary to the prison’s original advice. 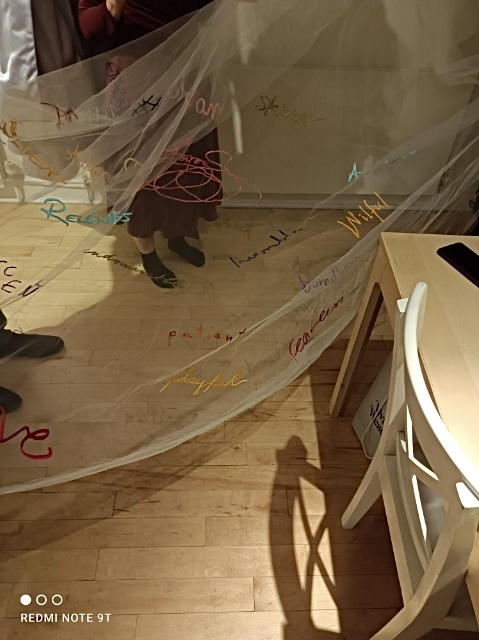 A very unglamorous photo of the veil I took in Stella’s kitchen, with my illegible “inexorable” in the middle!

Also in the room were the registrar who conducted the civil wedding, the Catholic chaplain and two prison guards, one for each door. Julian was able to hug and hold each of his family as they arrived, even though that was very much against the rules. That kind of physical comfort is something he will have been craving for years, and all eyes were full of tears. Julian’s father John was alarmed by his appearance. Julian was a stooped figure, and worryingly thin, even though obviously very happy in the moment.

The service went ahead as such services do, transcending the grim environment. Light relief was provided by little Gabriel running around and threatening to push each in turn of the room’s two alarm buttons, forcing the guards to chase him around, but in a playful manner. Max, who was disappointed by the slowness in appearance of the promised cake, had fallen asleep bent over at the waist, with his feet on the floor and his head on the chair, as only small children can.

Each person at the wedding was allowed by the registrar to stand up and say a few words about the event and the couple, who having exchanged vows and being pronounced wed, Julian was then invited to kiss the bride, which was perhaps done with more gusto than is usual on these occasions; to the extent that Julian’s brother Gabriel jokingly proffered the bride some tissues!

The legal part of the wedding being over, the couple now received a blessing from the Catholic priest, whose friendship and spiritual and emotional support has been invaluable to Julian during the ordeal of the last few years. The priest had brought a tablecloth and candles, and suddenly the nasty trestle was transformed into an altar. The priest was particularly careful to provide the couple with several more opportunities to kiss during the short ceremony. Then suddenly it was finished.

The authorities had insisted that no wedding photos could be taken, but had eventually agreed that a prison guard could take photos using the prison’s own camera. The prison will eventually give one or two prints of photos of their choosing to Julian, on the condition that they must never be published or made public.

Belmarsh prison was comprehensively pictured, including drone footage of the entire jail and lengthy interiors of every part, including the most secure units, in several documentaries including by right wing populist Ross Kemp, in which the Ministry of Justice fully cooperated. The dishonesty of complaining that wedding photos would be a security risk, is a callous and arrogant act by authorities who expect that they can never be held to account.

The truth is that the Establishment has put in years of consistent effort to dehumanise Julian in the public mind. That includes false allegations, ridiculous media stories about him not flushing the toilet, and fake claims that his journalism endangered lives. They simply wish to avoid any public exposure of Julian, the real man, that may challenge their drive to demonise. Wedding photos would never be a danger to the prison, but would be a danger to the state narrative.

This is of course the same reason that Pullitzer prize winning journalist Chris Hedges and I were vetoed by the Ministry of Justice from the original guest list. They did not want words or pictures to convey the love of the occasion or the joy of the family. They could not, however, prevent me from speaking to Stella and to all the guests who were there, and giving you this portrait in words.

After the wedding Julian and Stella were allowed time together – which meant that they were taken to the normal prison visiting room, where they could talk for half an hour amidst the other prisoners who were receiving their visitors, and back with the normal surveillance and restrictions of no touching. This must have been a terrible jolt, preparatory to the still worse jolt of being torn away from the one you love immediately after marrying.

I just cannot imagine how that feels; I suspect few people can.

Stella and Julian’s marriage is indeed a testimony to the power of love, and to the power of hope and human resilience. Just the preceding week their hopes were bruised for the umpteenth time as the Supreme Court refused to hear Julian’s case against the High Court’s agreement with the US appeal on his extradition. Julian faces a possible 175 years in jail under the US Espionage Act, for revealing the war crimes of the very state which is trying to extradite him. As Stella said, to marry in the face of this is both an act of resistance and an assertion of love.

The legal battle goes on, and we shall eventually win.

Those of us who value peace and love and freedom do not often get to feel that we are winning. But we do get days when we can triumph in the affirmation of our values. That Stella and Julian have done. That plain white table witnessed something more romantic than all the tosh of royal weddings and high altars. In Julian’s words, “free, enduring, love”.

They cannot stop that with their steel doors and iron bars.

With grateful thanks to those who donated or subscribed to make this reporting possible. This article, as with all the content of my blog, is entirely free to reproduce and publish, including in translation.