Scotland Against Criminalsing Communities (SACC) welcomes the publication today of the report by Council of Europe rapporteur Dick Marty on alleged secret detentions and unlawful inter-state transfers involving Council of Europe member states. The report is scheduled to be debated by the Parliamentary Assembly of the Council of Europe on 27 June. SACC joins with other peace and human rights groups in calling for vigils to be held at airports in the UK and the Republic of Ireland on Saturday 24th June to demand that our governments implement the recommendations made by Senator Marty and that governments and police forces take urgent action against torture and illegal detention.

While noting that the picture is still incomplete, Senator Marty documents a “global spiders web” of illegal activity. He particularly singles out Prestwick and Shannon as proven stopovers for aircraft involved in rendition and has been able to link specific visits of CIA-owned aircraft logged at these airports to specific instances of rendition. CIA-owned aircraft have also been logged at many other airports and, even if not involved in the transfer of prisoners, may be illegally providing logistical support for torture and kidnapping. We urge people to hold vigils on Saturday 24th June at any airports where illegal activity may have occurred.

Plans for vigils at Edinburgh and Prestwick airports have already been finalised; details of events planned at other airports will be announced in due course.

Edinburgh – assemble Edinburgh airport 12.30pm. Craig Murray, the former British ambassador to Uzbekistan and representatives of the Scottish Green Party and the Scottish National Party will be speaking at the vigil.

Updates on the planned vigils will be available at www.sacc.org.uk/rendition/

With the killing of the leader of Al Queda in Iraq, what will the implications be for the war against the US/UK presence?

LFCM speculates on the likely effects. 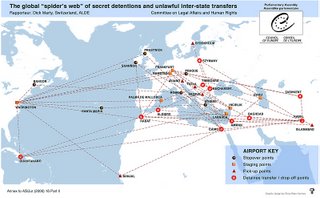