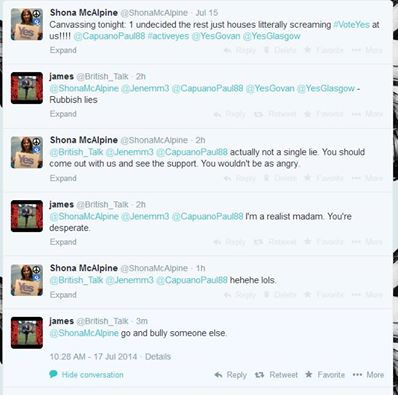 Evil Cybernat Bully Shona McAlpine has been stalking and harrying a poor innocent unionist. Doubtless this will be in the Daily Mail tomorrow.

I am fascinated by how the BBC are going to play the Commonwealth Games opening. There have been numerous warnings to Alex Salmond not to try to stoke up a wave of patriotism on the back of the Commonwealth Games, just as of course there was absolutely no effort to stir British patriotism around the London Olympics. There was absolutely no waving of union jacks, no jubilant celebration of home victories, no commentators getting all emotional at award ceremonies at the London Olympics, was there?

So I have no doubt the Commonwealth Games will be treated by the BBC, just as the launch of that useless expensive aircraft carrier was, as a unionfest. Any boos aimed at Alex Salmond will be gloatingly reported and tweeted, while the boos for Charles and Camilla will be turned off the soundtrack and ignored. George Osborne has already used the Commonwealth Games as a platform for anti-independence remarks, and Cameron is coming to Glasgow and will do the same, but woe-betide anyone who besmirches the political neutrality of the event with a pro-independence comment.

I have already seen a girl who plays badminton and a cyclist interviewed on the BBC to say they could not train or be financially supported in an independent Scotland. That some of the money that we send down to England actually comes back again seems to some cringing Scots like a reason for eternal grovelling gratitude. Training for elite sport is worldwide now, and doubtless some will still be done in England, also in the rest of Europe and in the States, for Scots sportsmen and women after independence. Interestingly I have seen no attempt by the BBC to interview any pro-independence Scottish competitors.