Jack Straw continues to lie about his involvement with torture. On Sunday, Alex Salmond told Alex Marr on the BBC that an inquiry must discover what Straw and Blair knew. On Monday Straw responded in the Guardian:

Straw said Salmond’s comments were completely untrue. “The British government was never complicit nor condoned torture or other ill-treatment of detainees wherever they were held,” he said.

I can offer absolute and definitive proof that Straw is lying (redactions made by FCO): 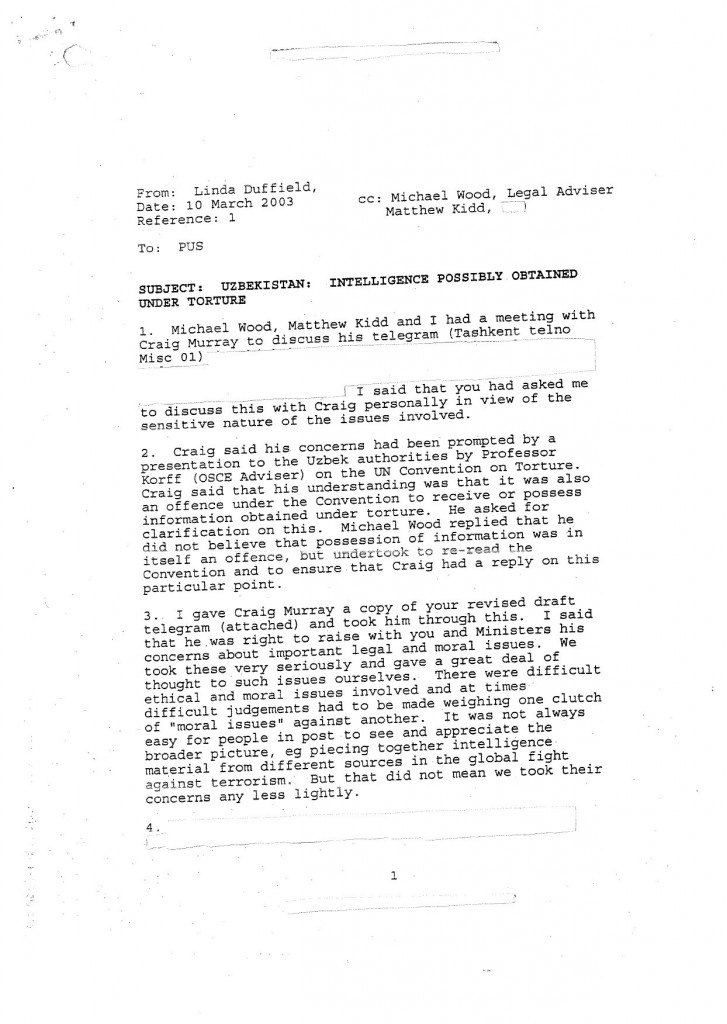 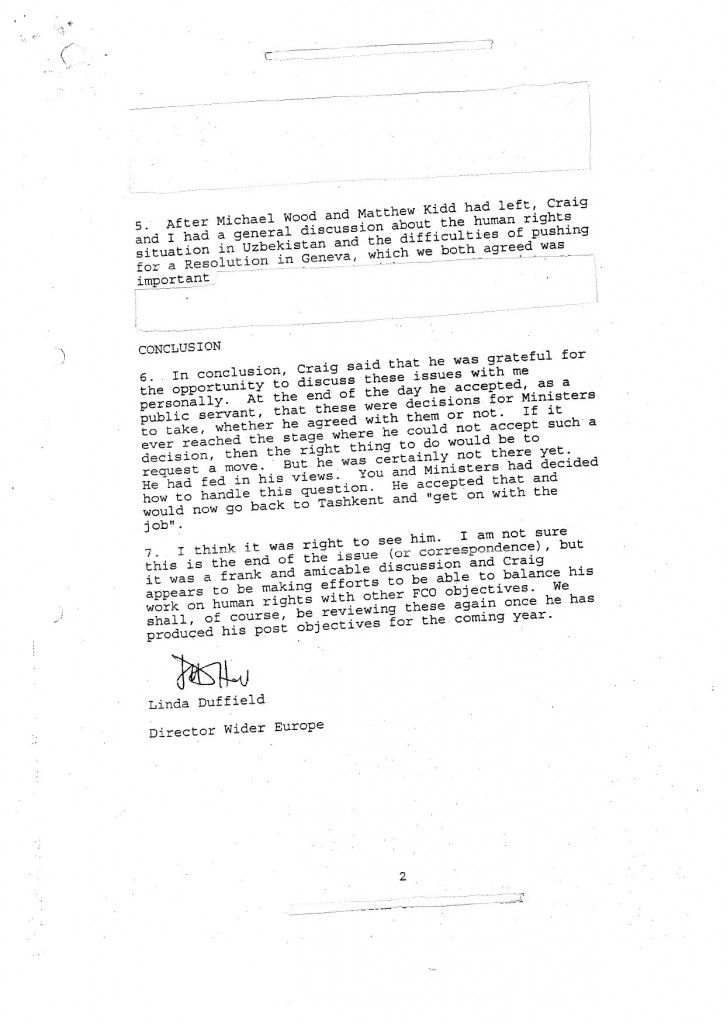 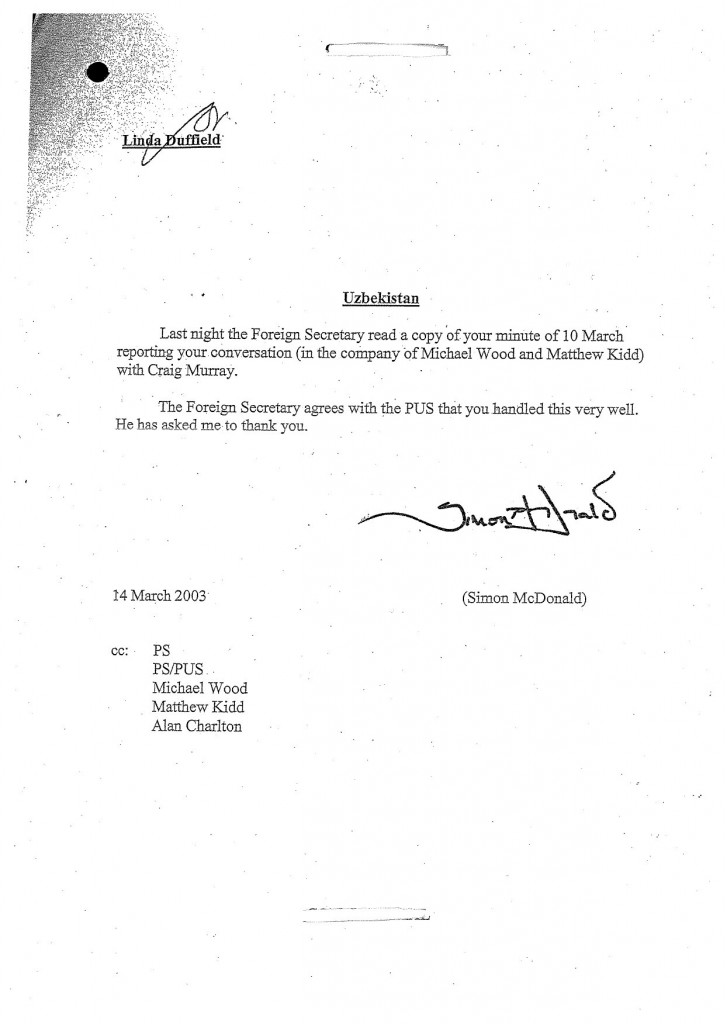 The Foreign Secretary was Jack Straw. Simon MacDonald was his Private Secretary in the FCO. 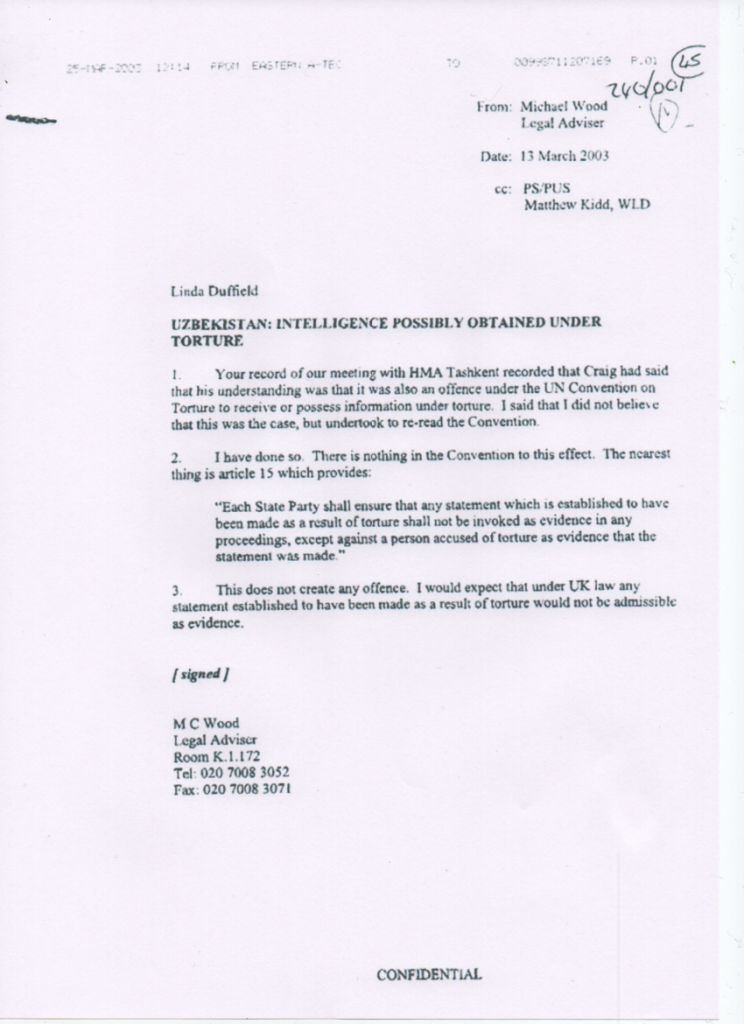 It has been a source of astonishment to me that journalists are prepared to continue to publish Straw’s denials of involvement in torture, when there is indisputable documentary proof that he is lying. I offered these documents to the Guardian years ago, but was not surprised when that Blairite rag refused to publish.

I was however surprised by this. When Straw criticised Salmond on Monday, I immediately offered these documents to the National as proof that Straw was lying. The National too refused to publish. Firstly they said that they had to consult their lawyers about whether the government would sue them. Then they said they could not work out how to condense the information into a short article (which begs the question why it had to be short). They then said they were too busy.

The reason I did not post for a week was that I was extremely dejected to receive an instant rejection, without interview, for the post of Chairman of the Scottish Human Rights Commission. This is an appointment of the Scottish Parliament and the decision is made by a committee of Scottish MSPs. It is a job for which I undoubtedly meet all the published requirements. I lecture regularly on human rights all round the world, and have been called to give evidence in person to the UK Parliamentary Joint Committee on Human Rights, the European Parliament and the Council of Europe. I have a great deal of senior level public sector management experience, also a requirement.

When I published a few weeks ago that I had been considering my future while in Ghana, it was because I was considering applying for the job on the Scottish human rights commission. That would have entailed going back to being a public servant and ceasing political activity, including giving up this blog. I certainly can do this – for the 21 years I was in the FCO, nobody except those close to me knew my political views. I decided eventually that the chance to work on human rights in a positive way might enable me to do more good in the world than I am achieving as a campaigner. I definitely did not expect to get the job, but could not apply honestly without interrogating myself as to whether I really was prepared to meet the conditions.

I did not however expect an out of hand rejection for a position for which I was not only qualified but which was also junior and less well paid than previous public appointments I had held.

I did not necessarily expect to get the job, but to be refused without being interviewed is not something I expected, and it hit me hard. As a whistleblower you become a non-person. That is why the media publishes Straw’s denials of all knowledge of torture despite the existence of these documents. It is unpleasant to be a non-person, who cannot even be interviewed for a job for which they are abundantly qualified.

The SNP plainly have a major problem with me as a member. Before the SNP Conference in Aberdeen, I was approached by the Embassy of Ecuador. They wished to have a meeting with the SNP on behalf of the alliance of seven South American states including Ecuador, Venezuela, Cuba and Bolivia who have a broadly anti-imperialist stance and were interested in learning about the Scottish independence movement with a view to possible cooperation in international fora. It so happened the Spanish acronym of this group is ALBA! The Embassy know me through Julian Assange and I was their only contact in the SNP, so they asked me to arrange the meeting. I emailed every suitable SNP contact I could think of, and made a number of phone calls, over a four week period. I eventually received a one line rejection, and had to host the Ambassador myself (apart from a short reception the SNP hosted for the diplomatic corps, to which I was refused entry).

Taking all these things together – my repeated rejection as a candidate, the refusal to meet ALBA, my out of hand rejection (by a SNP led committee) for the human rights job, the National’s refusal to run my evidence of Jack Straw lying, I feel not just rejected but despised by the hierarchy of the Independence movement. As I have moved back to Scotland with the sole motive of carrying on the campaign for Scottish independence, I really have this last week been looking hard at myself and considering what the future may hold. I suppose I was naïve to imagine that the hospitality and exclusion shown to whistleblowers in Whitehall would not be mirrored in Holyrood.

Which leads me back to the minutes above. When I objected to, and tried to stop, the policy of getting intelligence from torture, I knew I was probably blighting my future in the FCO. But I did not fully appreciate that it would lead on to me being backlisted by the establishment – including the Holyrood establishment – for my entire life. It is rather a hard cross to bear. Fortunately I have much else in life to be thankful for.