Firstly I do promise that very shortly I shall get back to blogging about things that are not me. But it has been a wild week. I received intimation I had been found in contempt of court, my blog was taken down, I stood for internal election as an Action for Independence (AFI) candidate for the elections, I received the formal judgement on Contempt, I instructed lawyers to appeal, I was elected top of the list for the Lothians for AFI and my candidature announced with a real chance of being elected to the Scottish parliament, my blog was reinstated, Alex Salmond launched his political comeback with a new political party, Alba, and I along with all AFI candidates stood down from the election. All of that happened in five days.

So where do I begin? Well firstly, the blog is back but you will find that the historic articles which gave details of Alex Salmond’s defence in his acquittal at the High Court of Edinburgh have all been removed by order of the court, as potentially identifying complainants. This is I believe a great shame. This blog was literally the only source that bothered to publish the defence case, and the third party evidence of eye witnesses which showed that several of the accusers were actively lying. It is my genuine belief that, were if not for my blog, there would be no measurable proportion of the population that knows WHY the jury acquitted Alex Salmond, and the Scottish Government narrative, heavily promoted by the mainstream media, that this was some sort of erroneous jury verdict, would be entirely unchallenged in public consciousness. As it is, I was only able to inform an active but important minority about the evidence of defence witnesses. That evidence is now removed from this site.

I was found not in contempt on publishing material likely to influence the jury, and on reporting the exclusion of a juror. The finding against me on jigsaw identification was based on this argument: 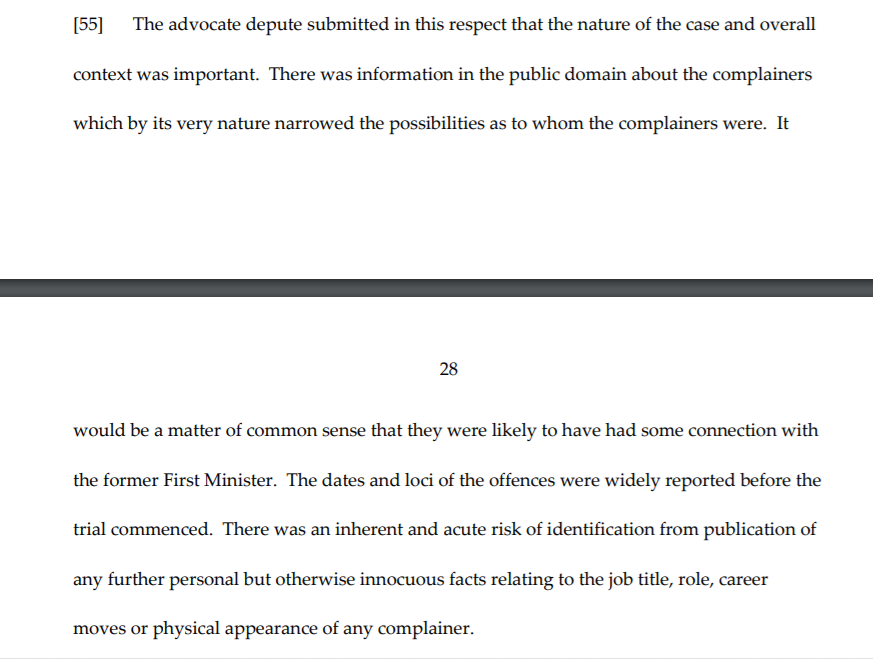 It also depended on the notion that identification does not need to be to the public, but can be to a single individual with specialist knowledge, eg a workmate. If this is a true statement of the law, then it is reasonable to argue that I am indeed in contempt as “likely” to identify in that sense. The problem is that a great many other journalists and publishers would also have been in contempt under this very strict construction, and we then have politically motivated selectivity of prosecution. It would also be virtually impossible to ever report defence evidence in a case.

You can read the full judgement here. It is particularly scathing of my affidavits and say that they include “hearsay and gossip”. It is true they do include gossip, but it is clearly identified as gossip. The status of source for all information is clearly identified, and on that I have this point to make.

If as described in my affidavit a first hand source tells me of a meeting they were at, which discussed how to ruin Alex Salmond’s career by adding sufficient charges against him to ensure at least one would stick, that is an eye witness journalistic source. If you can stand up that they really do have access to such meetings, it is very good, direct source, eye witness information for a journalist.

If there were subsequently a trial of Nicola Sturgeon for conspiracy to pervert the course of justice, my evidence would be worthless. It would indeed be hearsay. The eye-witness was my informant. I am just a journalist with a source.

But my affidavit was not given in a trial of Nicola Sturgeon. It is given in my own hearing for contempt. The purpose of my affidavits is to explain precisely my state of knowledge at the time of writing various articles, how I came by that knowledge, and what my intentions therefore were in publishing. This is fundamentally misconstrued by the judgement, and in a peculiarly pejorative way.

Anyway, that is for appeal. My sentencing hearing is on 7 May. It is quite possible that any appeal will require to be conducted from prison, which is a little dispiriting. But as my late mother always used to say as disaster rather frequently buffeted our small family: “Oh well, it’s all part of life’s rich pageant”.

To understand the coming and going of Independence fringe parties this last week, you have to understand the D’Hondt system under which Scottish parliamentary elections are conducted.

The Holyrood electoral system has two layers and the voter gets two ballot papers, a constituency ballot and a list ballot. The constituency ballot works on the simple Westminster “first past the post system” with which most readers will be familiar.

In Lothians, where I am, at the last election the SNP won a majority of the constituencies and that also provided sufficient downweighting for them to get no regional list seats. By contrast, as the Tories, Greens and Labour win very few or no constituencies, almost all their fairly large blocks of Members of the Scottish Parliament are from the regional list.

In the last Holyrood elections in 2016, in six of the eight Scottish regions, the SNP won so many constituencies that over 850,000 SNP regional list votes were so downweighted, they were entirely wasted and elected nobody at all. With every opinion poll showing the SNP well over 20% ahead of the next party i constituency voting intentions, there is no doubt this massive waste of SNP list votes will repeat this year.

I hope that is clear?

Now the D’Hondt system in Scotland allows for parties that are list only parties. As these will have no constituency wins, none of their regional list votes will be downweighted at all. As there are several party list seats in each region available, allocated according to the proportion of votes cast for each party after after downweighting, a list only party has the advantage that it will in most regions only need in practice 5 to 6 per cent of the vote to start electing MSPs. The attraction of a pro-Independence list party is obvious, in that only a small minority of SNP voters need to divert their otherwise wasted regional list votes to an Indy list party, in order to start increasing the Independence vote in parliament and reducing the number of list MSPs from the unionist parties.

This tactic is however opposed with great vehemence by the SNP, who are nothing if not fiercely self-interested. It is also frankly rather difficult to explain to the average voter, because it is both complex and counter-intuitive. A second ballot paper that penalises parties for success on the first is a strange concept.

Personally I detest D’Hondt. It was forced on Scotland because of Tony Blair’s fears that the much simpler STV proportional system would prove popular and eventually spread to Westminster. STV also gives far more power to the elector, and far less to parties. Under STV you can rank your favourite candidates within a party, rather than have the party list ranking shoved on you, and under STV you can just prioritise the best candidates across party lines. Party managers hate that idea. And you only have to deal with one ballot paper.

Anyway, we have D’Hondt, which party power managers love because it gives the parties power to both choose the constituency candidate and to fix the ranking of their candidates on the party list.

Had I stood in this election, it is not at all improbable that a result like the 5% I obtained as an independent anti-war candidate in 2005 against Jack Straw in Blackburn would have got me elected to Holyrood for AFI. For those who support Scottish Independence, the case for a good list party is unanswerable, and Alex Salmond’s leadership is what is required to push it over the 10% number that would probably equate to a dozen MSPs, rising rapidly thereafter. I should say that I was very much looking forward to the campaign and while I am sure my standing down for Alba is the best thing for Scotland, I won’t pretend I am not a bit down about it on a purely personal level.

I should finish with my own belief that this initiative is essential because I remain firmly of the view that Nicola Sturgeon has no real intention to risk her career and position by a genuine tilt at Scottish Independence. The existence of a represented opposition party to the SNP that really does want to achieve Independence, rather than just exploit the concept for votes and enjoy the gratifications of colonial administration, is absolutely essential to Scotland.

There are still many very good people in the SNP. But their claim that this time, if we elect them to well-paid positions, they will actually do something about a new Independence referendum, is unconvincing. We have heard it again and again. In five years time, we may find they have vanished from their apparently dominant position, as swiftly as Ireland’s Redmondites, and for the same reason.

I was delighted to hear Alex state clearly yesterday that a referendum is one route to Independence, but it is not the only one, and it is the Scottish parliament which reflects the sovereign will of the Scottish people. That has passed unremarked amid the media brouhaha: it may prove a historic moment.