I have a confession to make. Back in 2014 I posted that I was going to write something further on the subject of the McCanns. In the end I did not, because I was surprised by the strong emotional reaction I received, from a number of decent people, who were enraged that I might be prepared to write something not to the McCanns’ advantage. But I regret being so pusillanimous, particularly as so much discussion has been suppressed by the extremely aggressive stance taken on threats of libel action on this story.

So in the full knowledge that some decent people will be outraged, here it is.

This week there have been two more developments. The Home Office has announced that it will fund still further the police investigation into Madeleine’s disappearance, on which £10 million has already been spent. Plus the appeals court in Lisbon has overturned the libel verdict against the Portuguese detective Goncalo Amaral, who led the case and formed his own firm convictions at to what happened. The 500,000 euro libel award to the McCanns is now cancelled.

None of these sums of money would matter in the least, and practically nobody would grudge any expense, to have Madeleine McCann alive, safe and happy. There can be nothing worse for a parent than the loss of a child, whatever the circumstances. If the McCanns genuinely do not know what happened, that must be agonising beyond belief. My grandparents had a nineteen year old son, an uncle I never knew, missing in action in World War 2 and the pain never left them, even when his fate was resolved.

And yet, and yet… It is because our children are so precious to us that we treat them as such. I recall an incident on Jamie’s first birthday, which we spent in a hotel in Italy. I was in the room with Jamie. My then wife had gone out to the car. The birthday cake was delivered to reception and had to be paid for. Jamie was fast asleep. I dashed out of the hotel room, down two flights of steps to reception, literally threw the money at them and ran back up the stairs. I was away under two minutes but have never experienced such adrenalin, nor would wish to again. An overwhelming instinct had kicked in telling me I had done wrong in leaving the baby unattended, even so briefly.

I find the McCanns’ behaviour indefensible. There appears to be a disconnect in the public mind in the UK which prevents people from realising just how far the McCanns were from their children. This is a useful graphic just to see the layout, (do not worry about the other info on it). 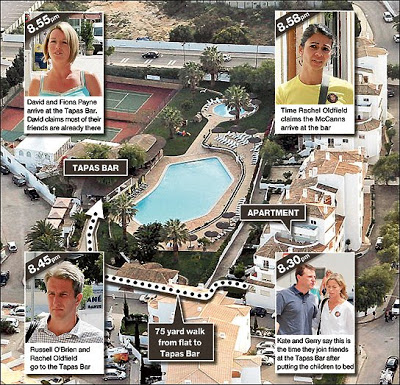 The McCanns could not actually see their apartment from the tapas bar due to the wall around the pool. To get back there, they had to use the gate and walk around that wall, which made it a 75 yard hike. And the apartment had double doors onto the street on the opposite side of the block from that facing the pool.

I do not see how anybody understanding this geography can consider that it was normal parenting for the McCanns to leave two one year olds and a three year old, alone in the apartment in these circumstances – for hours, and repeatedly several days running. It is something I would absolutely never dream of doing with my own children. If nothing else, had any of the children been crying and in distress – and the chances of that with three tiny children are pretty high – there was no way they could hear them.

The claimed abduction is not the only thing that could have happened. Cholic. Vomiting. Sore nappies. Coughing. Choking. Bad dreams. Overheating. All kinds of thing can distress children. So far as I can judge, it is not that I am weird in my own views, rather it is absolutely accepted in British society that you do not leave 1 year olds without care of an adult. Why are the McCanns an exception?

Which leads me on to the question of why they received such exceptional treatment from British authorities, directed straight from No. 10, to the extent that Blair and Brown eventually gave them a PR representative? I used at one stage to be Resident Clerk in the FCO, a now abolished post effectively of night duty officer. I can tell you from horrible personal experience that the FCO deals with gut-wrenching cases of lost or dead children abroad frequently. I spent one of the most terrible three hours of my life, through to a cold dawn, on the phone with a hysterical bereaved mother desperate to explore any avenue that might give a possibility that the boy who had just drowned in Brazil was misidentified as her son. On average, I am afraid such tragedies get substantially less than 1% of the public resources that were devoted to the McCanns.

I am going to come straight out with this. British diplomatic staff were under direct instruction to support the McCanns far beyond the usual and to put pressure on the Portuguese authorities over the case. I have direct information that more than one of those diplomatic staff found the McCanns less than convincing and their stories inconsistent. Embassy staff were perturbed to be ordered that British authorities were to be present at every contact between the McCanns and Portuguese police.

The British Ambassador in Portugal, John Buck, had been my direct boss in the FCO. he was Deputy Head of Southern European Department when I was Head of Cyprus Section. He and his staff were concerned by contradictions in the McCann’s story. The Embassy warned, in writing, that being perceived as too close to the McCanns might not prove wise. They demanded the instruction from London be reconfirmed. It was.

I know of people’s misgivings because I was told directly. But material was also leaked to a Belgian newspaper confirming what I have said. It was published by the Express, but like so much other material which is not supportive of the McCanns, it got taken down. Fortunately that last link preserved it. It also shows that the FCO continues to refuse Freedom of Information requests for the material on the interesting grounds that it might damage relations with Portugal.

For the avoidance of doubt, I do not believe there was a high level paedophile ring involved. I make no such argument. Nor do I claim to know what happened to Madeleine McCann. But I do believe that the McCanns were less than exemplary parents. I believe that New Labour’s No.10 saw, in typical Blair fashion, a highly photogenic tragedy which there might be popularity in appearing to work on.

And I believe there is a genuine danger that the high profile support from the top of the British government might have put some psychological pressure on the Portuguese investigators and prosecuting officers in their determinations.

459 thoughts on “The Strange Case of Tony Blair, Gordon Brown and the McCanns”