Skip to content
Home » Uncategorized » The Discreet Charm of the Bourgeoisie

Only the Tories could produce a sex dossier like this one, in tremendous High Tory prose. They talk of “impregnation” and “fornication”. This provides some backing for its authenticity.

It is difficult to understand the provenance of this “sex list” of Tory MPs. What was the standing of the junior Tory researchers who allegedly compiled it, and at whose behest? Assuming this copy is genuine, we know that at least some of it is accurate because individuals like Mark Garnier have admitted the detail of the allegation. But I publish it as a matter of intense public interest at the moment, and I publish it as evidence that this is what is alleged. This list is already extremely widely available online. I am not in any sense endorsing or promoting as true any of the specific individual allegations, which may be groundless nonsense. I understand that in some cases these allegations are strongly denied.

Except for the Liam Fox and Adam Werritty bit, we all know that is true.

What is genuinely alarming about this list is the clear picture that emerges overall that the pool of MPs’ researchers, who are often young and are in a subservient position in this context, are viewed as fair game for MPs’ sexual predation. The list of 40 Tory MPs (NB Not 36) includes 23 who are accused of inappropriate behaviour towards researchers, secretaries and others in a dependent position. This is disgusting exploitation and may be justly compared to the Weinstein affair.

But some of the other allegations do not strike me as of genuine public interest. Personal sexual preferences between consenting adults are not my business, and I detect a definite whiff of homophobia in some of these details. If somebody likes to be peed on by three men, what has that got to do with his ability or integrity as an MP? Similarly the concern about extra-marital affairs seems to come from a bygone age. If the several citings of Kwesi Kwerteng are true, the man has truly appalling taste. Women appear to be dubiously targeted for mere promiscuity.

Tories are sleazebags. Who knew? 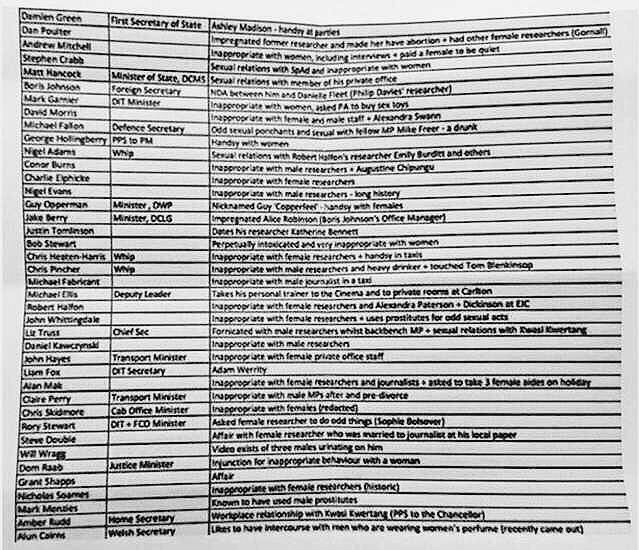 125 thoughts on “The Discreet Charm of the Bourgeoisie”