When Jeremy Hunt decided to attack the United Nations on twitter yesterday, he didn’t expect them to respond. He got owned. 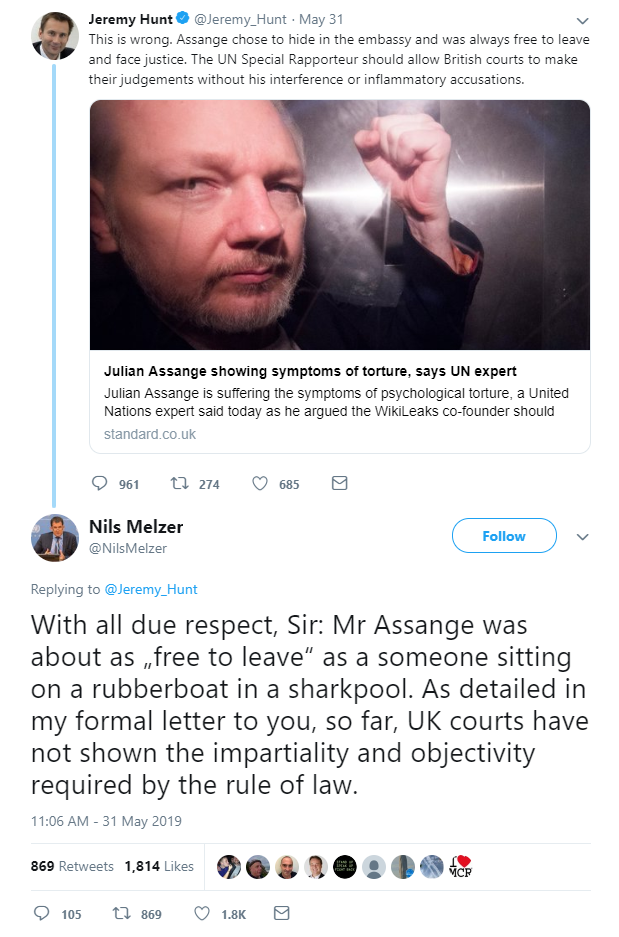 When Professor Melzer says that “UK courts have not shown the objectivity and impartiality required by law”, people should sit up and listen. I have detailed judge Michael Snow calling Assange a “narcissistic personality” in a brief hearing in which Assange had said virtually nothing but “not guilty”, on the basis of prejudice Snow brought with him into the courtroom. Snow convicted him summarily of bail jumping and sentenced him to a virtually unprecedented 50 weeks. I have detailed Judge Arbuthnot, wife of a former Tory Defence Minister who co-owns a company with a former Head of MI6, mocking Assange and saying he can get all the exercise his health required on a Juliet balcony, as she dismissed a motion to have the bail charges dropped. I have detailed Judge Phillips of the Supreme Court choosing to rely on the French text and discount the English text of a treaty in arguing extradition was in order.

The bias of the British courts has been palpable and stinking. Hunt’s response to being called out, by saying the UN “should allow British courts to make their judgements”, is a nonsense. British judges have shown themselves to be utterly untrustworthy.

For almost ten years I have been documenting the incredible abuses of legal process and the barefaced displays of malevolent prejudice by the British judges who have been at the sharp end of the state’s persecution of Julian Assange. Yesterday I recommended an excellent summary of it all by Jonathan Cook. Yet every single episode has been entirely misrepresented by the corporate and state media to the extent that the ordinary population of the UK has been brainwashed into unthinking hatred of Assange. Those of us who have tried to explain the true situation have been systematically traduced by the state and “mainstream” media.

As Professor Melzer put it yesterday:

there has been a relentless and unrestrained campaign of public mobbing, intimidation and defamation against Mr. Assange, not only in the United States, but also in the United Kingdom, Sweden and, more recently, Ecuador.” According to the expert, this included an endless stream of humiliating, debasing and threatening statements in the press and on social media, but also by senior political figures, and even by judicial magistrates involved in proceedings against Assange.

“In the course of the past nine years, Mr. Assange has been exposed to persistent, progressively severe abuse ranging from systematic judicial persecution and arbitrary confinement in the Ecuadorian embassy, to his oppressive isolation, harassment and surveillance inside the embassy, and from deliberate collective ridicule, insults and humiliation, to open instigation of violence and even repeated calls for his assassination.

This is undeniably the truth. The British “liberal” establishment and media should be hanging their heads in collective shame at being called out by the United Nations on this. But they won’t. 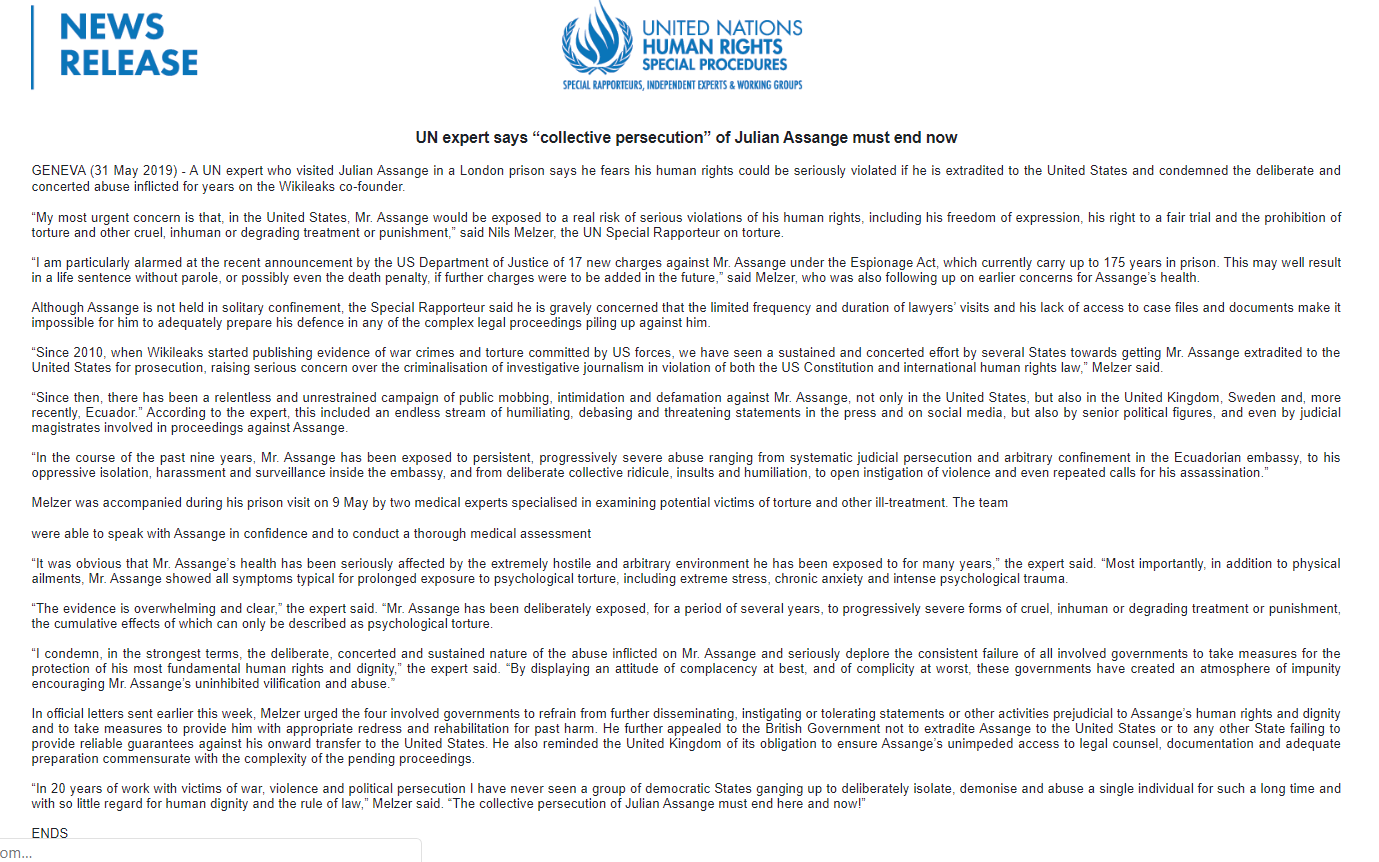 I recall that, when the United Nations Working Group on Arbitrary and Illegal detention ruled that Julian was being held against his will in the Ecuadorean Embassy and should be permitted to leave to Ecuador, in repudiating the UN Working Group – whom the UK had supported in every single one of hundreds of previous cases – then Foreign Secretary Philip Hammond stood up in the Commons and denounced the UN Working Group as being “lay people not lawyers”, when in fact every single one of the panel is an extremely distinguished international lawyer. Hammond’s lie to parliament did not surprise me; but I was genuinely astonished that the entire corporate and state media went along with this most blatant of lies and did not call it out. The BBC, Times, Financial Times, Guardian all reported Hammond’s comment that the UN panel were “not lawyers”. None of them would agree to publish a correction of this basic and easily verifiable fact.

Britain no longer makes a pretence of obeying the rule of international law. It simply refuses to acknowledge the concerns of the UN in the Assange case, happily dependent on the bubble of prejudice the political and media elite have manufactured. This is part of a general pattern of direspecting the UN. Theresa May as Home Secretary refused to let the UN Special Rapporteur on Violence Against Women inside Yarls Wood immigration detention centre to inspect conditions there. The Tory government reacted to the recent shocking UN report on poverty in the UK – none of the basic facts of which are challenged – by seeking to have the UN Rapporteur removed.

When you add this together with the UK’s refusal to accept the 13-1 Opinion of the International Court of Justice that the Chagos Islands belong to Mauritius, and the UK’s refusal to accept the ruling of the agreed International Chambers of Commerce Court of Arbitration that Britain must pay its debt to Iran, you get what is a very clear picture that the UK has gone full rogue state and has simply abandoned its support for the system of international law which was in very large part a UK creation.

To repudiate the institutions of international law at a time when the UK is leaving the EU and launching out on its own as a middle sized power, just at the moment when acting as a crony to the USA no longer gives you the protection of the biggest boy in the school, is unwise. But still more is it immensely sad to see the abandonment of the project for an international system based on the rule of law rather than on force. One by one, the UK is simply repudiating the authority of all the major international institutions that enforce international law. The UK is acting as a rogue state.