Long term readers will recall the Philip Cross Affair. A Wikipedia Editor named “Philip Cross” was relentlessly conducting a propaganda operation. It had two prongs; the first was continually to denigrate the Wikipedia entry of all public figures who opposed military intervention in the Middle East, removing positive information and adding mainstream media slurs in real time as they were made. The second and less noted prong was to big up the Wikpedia entries of right wing mainstream media figures, removing negative information and adding a positive spin.

The incredible thing about “Philip Cross” was that he never took a single day off. From 29 August 2013 to 14 May 2018 “Philip Cross” edited Wikipedia every day, including Christmas days, for 1,721 days. I can claim to be the person who first brought the “Philip Cross” operation to a wide audience, and here are my series of articles on the subject:

Is GCHQ Embedded in Wikipedia?

If you are new to this, I really do commend that series as a fascinating glimpse into the information wars that lie behind what you read on the internet. The BBC World Service even made a radio programme about Philip Cross.

Being the BBC it downplays the affair in a number of ways – crucially, it gives several examples to show that Philip Cross’s edits are harmless, and not a single example of his thousands of vicious edits, such as his editing my Wikipedia entry to call my wife a stripper.

The BBC also disingenuously claim that the fact that Cross edited Paul Dacre’s entry shows he did not only edit anti-war figures. They fail to point out that that his edits to Paul Dacre were all designed to glorify Dacre, the Daily Mail’s editor until recently, whereas his edits of anti-war figures were designed to do the opposite.

But the BBC report does correctly state that the “Philip Cross operation” turns out to be an organised neo-con group operating behind the persona of Philip Cross, who is a real vulnerable person with health issues. George Galloway correctly says he was given information from a concerned close relative of Cross who believes he is being exploited. I can confirm that is true. I was also given the opportunity to meet the close relative but I declined as I saw no point in duplicating the effort and causing further stress.

Galloway believes this was a paid operation. It appeared to have very close links to the Times newspaper and to the Euston Manifesto group. James Harding, Times editor, had his page lovingly edited 118 times by the “Philip Cross” operation, largely to remove or rebut criticisms. 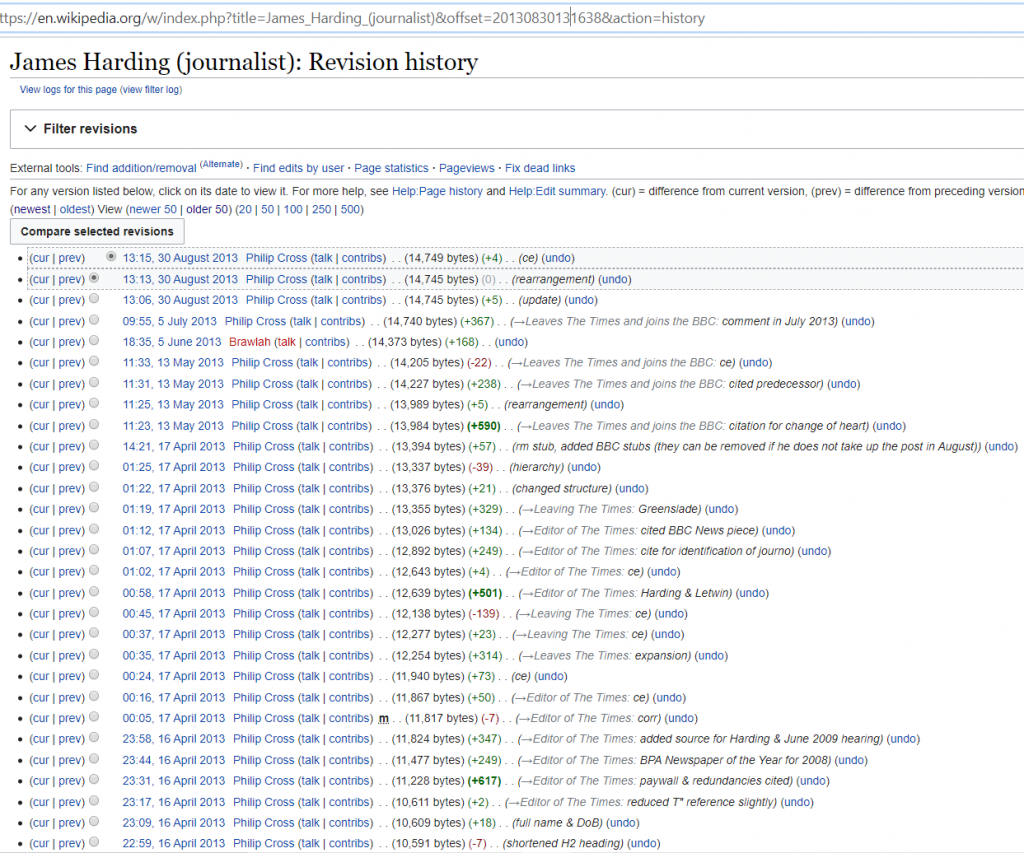 James Harding is of course currently editor of Tortoise magazine.

So who were the editors working behind the group name of “Philip Cross”?

For me, the most fascinating and insufficiently explored avenue of the Philip Cross affair was the question of his Twitter followers. “Philip Cross” had a twitter account which never did anything interesting. He simply retweeted articles by right wing journalists; that was the majority of his output. Very occasionally he would add a one line comment. There was nothing remotely original or interesting, even to a person who shared the right wing views of the “Philip Cross” persona, until the operation was exposed.

Yet this extremely dull twitter account by this obscure unwell man, which never tweeted anything original or witty, had among its 200 followers a collection of establishment figures and, most notably mainstream media journalists. Why on earth would Tristram Hunt and James le Mesurier of white helmet jihadis fame find it worthwhile to follow this obscure account? Above all, why did a whole slew of MSM “journalists” follow an account of no original interest at all?

There is no other possible conclusion than that these figures were aware of the “Philip Cross” operation when it was still apparently nothing but an extremely obscure man who liked obsessively editing Wikipedia and retweeting Nick Cohen and David Aaronovitch (his most frequent tweets). My intuition is – and this is not fact, but a working hypothesis that fits known facts to date – that the many MSM journalists who were, for no apparent reason, following the obscure “Philip Cross” twitter account, were not merely au fait with, but a part of, the Wikipedia editing operation that hid behind “Philip Cross” and his IP address.

So here are those MSM followers of the “Philip Cross” twitter account as noted by me on 21 May 2018. Note Dani Garavelli. 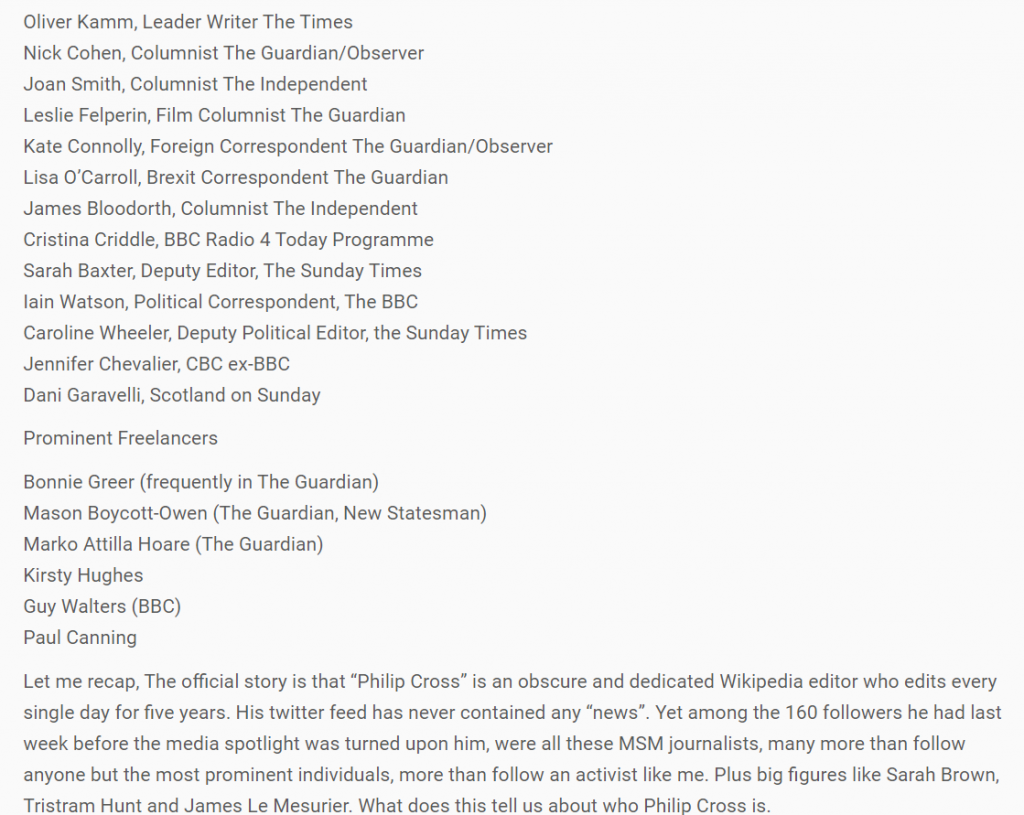 DANI GARAVELLI. I had quite forgotten until reminded by Leftworks. Once reminded, I recall that I was getting fed up typing up names and almost left her off as a nobody, writing for a publication nobody reads any more. I am glad I did not.

So why was Dani Garavelli one of “Philip Cross”‘s devoted Twitter followers from when the “Philip Cross” operation was still secret?

Garavelli was recently commissioned by James Harding (remember him above?) for Tortoise Magazine to write a hit piece with the aim of destroying Alex Salmond’s reputation by appealing to the #Metoo movement, evoking sympathy for the accusers and restating prosecution evidence while simply ignoring defence evidence.

Alex Salmond was of course an opponent of NATO bombing of Serbia and has been a staunch and outspoken opponent of UK military intervention in the Middle East. So who was editing negatively his Wikipedia profile? “Philip Cross” of course. 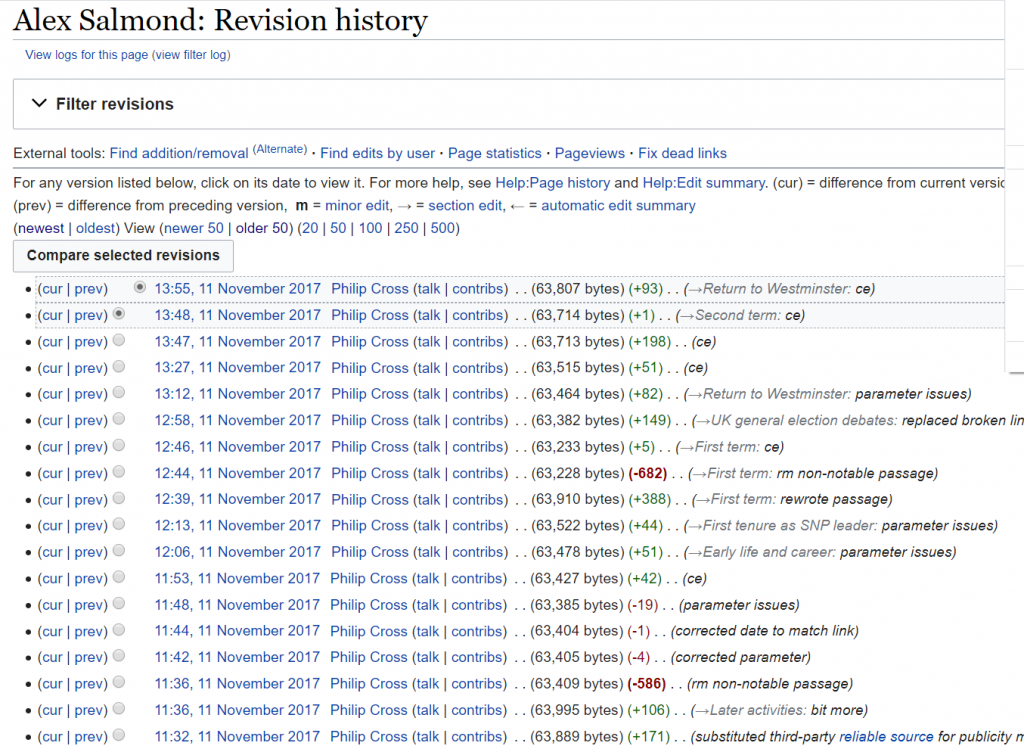 Ladies and Gentlemen, I give you the British Establishment. Like a circle within a circle, like a wheel within a wheel, a never ending propaganda operation to control the population.

Once Garavelli’s execrable article was published by Tortoise (interestingly for free access by a magazine whose business model allegedly rests on its fierce paywall), the propaganda deluge online to hype it from MSM journalists and from UK government trolls was immense. Interestingly there was a third element – a whole raft of young paid employees of the SNP and a slew of similar wannabe SNP careerists. A fascinating amount of entryist penetration of the SNP has been exposed in this process.

It became obvious the political destruction of Alex Salmond is a major objective of the UK state, worth the potential burning of hitherto hidden assets. I paid close attention because the same forces were leveled against me in a hate storm for pointing out the very obvious deficiencies in the Garavelli article, facilitating a very successful online pushback by ordinary folk. That will be a subject to discuss another day.