Today, the corporate media that cried “Media freedom” when Extinction Rebellion blocked the billionaire owned propaganda presses, is silent as Julian Assange’s Calvary for bringing real truth unfiltered to the public moves on to its next station; the macabre Gothic architecture of the Old Bailey.

The Tories appeared remarkably tolerant in the days when Extinction Rebellion were causing general disruption to the public. But to threaten the interests of billionaire paymasters is something against which the entire political class will unite. At a time when the government is mooting designating Extinction Rebellion as Serious Organised Crime, right wing bequiffed muppet Keir Starmer was piously condemning the group, stating: “The free press is the cornerstone of democracy and we must do all we can to protect it.”

It is surely time we stopped talking about “free press”, as if it was Thomas Paine or William Cobbett distributing pamphlets. Print media is now the subject of phenomenonal ownership concentration. It broadcasts the propaganda of some very nasty billionaires to a shrinking audience of mostly old people. The same ownerships have of course moved in to TV and Radio and increasingly into new media, and have a political stranglehold over those who control state media. At the same time, the corporate gatekeepers of Facebook and Twitter purposefully strangle the flow of readers to independent online media. The idea of a “free press” as an open marketplace of democratic ideas has no real meaning in modern society, until anti-monopoly action is taken. Which is the last thing those in power will do.

Quite the opposite, they are actively seeking to eliminate dissent even from the internet.

I do not want permanently to close down the Sun or the Telegraph; neither do Extinction Rebellion. But their excellent action is an important opening to the debate about controlled public narrative, not least on climate change. The highly paid stenographers to power have been quick to protest. Murdoch mouthpiece David Aaronovitch tweeted out that in fact 99% of the time there was no editorial interference from Murdoch. But that is the point. Murdoch employs reliable right wingers like Aaronovitch; he does not need to tell them what to write. 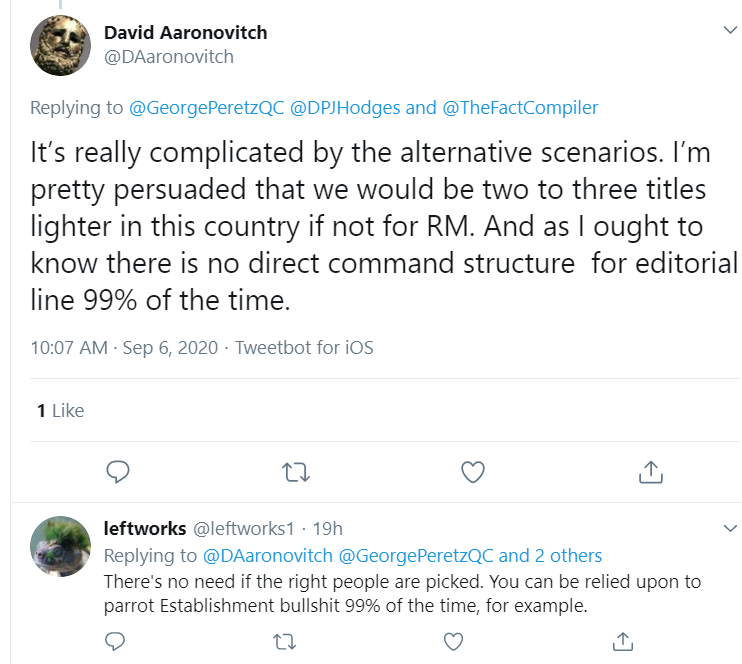 Show me the Murdoch journalist who has more than once published about the human rights abuses against the Palestinians. Murdoch ejected his own son from his media empire because James was insufficiently enthusiastic about the slow genocide of the Palestinians, and does not believe that the market will magically fix climate change.

Julian Assange has been a light in this darkness. Wikileaks have opened a window into the secret world of war crime, murder and corruption that underlies so much of the governance we live under throughout the “free” world. Coming in the wake of the public realisation that we had been blatantly lied into the destruction of Iraq, there was a time when it seemed Assange would lead us into a new age where whistleblowers, citizen journalists and a democratic internet would revolutionise public information, with the billionaire stranglehold shattered.

That seems less hopeful today, as the internet world itself corporatised. Julian is in jail and continuing today is an extradition hearing that has been one long abuse of process. The appalling conditions of solitary confinement in which he has been kept in the high security Belmarsh Prison, with no access to his legal team or a working computer, to his papers or to his mail, have taken a huge toll on his physical and mental health. The UN Special Representative has declared he is subject to torture. A media which is up in arms about the very dubious attack on Navalny, has no emotion for state torture victim Assange other than contempt.

It is constantly asked by Julian’s supporters why the media do not see the assault on a publisher and journalist as a threat to themselves. The answer is that the state and corporate media are confident in their firm alliance with the powers that be. They have no intention of challenging the status quo; their protection from those kicking Assange lies in joining in with the kicking.

I hope to be in court today, and throughout the extradition hearing. The public gallery of 80 has been reduced to 9 “due to Covid”. 5 seats are reserved for Julian’s family and friends, and I have one of these today, but not guaranteed beyond that. There are just 4 seats for the general public.

Journalists and NGO’s will be following the hearing online – but only “approved” journalists and NGO’s, selected by the Orwelian Ministry of Justice. I had dinner last night with Assange supporters from a number of registered NGO’s, not one of which had been “approved”. I had applied myself as a representative of Hope Over Fear, and was turned down. It is the same story for those who applied for online access as journalists. Only the officially “approved” will be allowed to watch.

This is supposed to be a public hearing, to which in normal times anybody should be able to walk in off the street into the large public gallery, and anyone with a press card into the press gallery. What is the justification for the political selection of those permitted to watch? An extraordinary online system has been set up, with the state favoured observers given online “rooms” in which only the identified individual will be allowed. Even with approved organisations, it is not the case that an organisation will have a login anyone can use, not even one at a time. Only specifically nominated individuals have to login before proceedings start, and if their connection breaks at any point they will not be readmitted that day.

Given these restrictions, I was very conscious I may need to queue from 5am tomorrow, to get one of the 4 public places, if I drop off the family list. So I went this morning at 6am to the Old Bailey to check out the queue and work out the system. The first six people in the queue were all people who, entirely off their own bat, without my knowledge and with no coordination between them, had arrived while London slept just to reserve a place for me. I was swept up by their goodness, their trust in me and by their sheer humanitarian concern about Julian and the whole miscarriage of justice. I chatted cheerily with them for a while, then came back to write this, but just got round the corner when I burst into floods of tears, overwhelmed by all this kindness.

I have to pull myself together now and get into that court.

My coverage of Julian’s case is entirely dependent on your financial support. Unlike our adversaries including the Integrity Initiative, the 77th Brigade, Bellingcat, the Atlantic Council and hundreds of other warmongering propaganda operations, this blog has no source of state, corporate or institutional finance whatsoever. It runs entirely on voluntary subscriptions from its readers – many of whom do not necessarily agree with the every article, but welcome the alternative voice, insider information and debate.

141 thoughts on “Media Freedom? Show me the MSM Journalist Opposing the Torture of Assange”