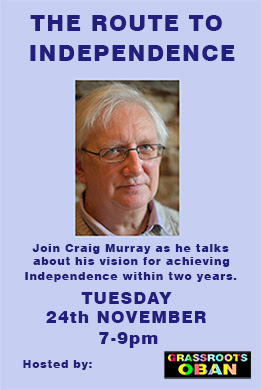 Grassroots Oban are hosting me for a zoom talk on the Route to Independence this evening at 7pm. You are welcome to join us, which you can do by registering in advance (ie now) here:

After registering, you will receive a confirmation email containing information about joining the meeting. I hope that over half the meeting will be open to questions and contributions and I am very happy for these to be wide-ranging. I must confess I don’t like online meetings and I very much miss actually getting round and meeting people. Hopefully we are not too far now from being able to do that again.

136 thoughts on “The Route to Independence Leads Through Oban”