I am planning to travel to Spain at the weekend to give evidence in the criminal case against UC Global for spying on Julian Assange and his visitors (including me) in the Ecuadorean Embassy. It has taken me six solid hours so far to try to work out the logistics of this. I shall travel via Schiphol and I need numerous covid forms and certificates for British, Dutch and Spanish authorities, for the airports and for the airlines. I also need a covid-19 negative PCR test before the flights in both directions, which must be timed at less than 72 hours before the flight and before arrival.

As the test results take up to 48 hours for me to receive and test slots are heavily booked, this makes timing very tricky, especially as I intend to be in Spain less than 72 hours. You end up with a very narrow window. One of the things I have been trying to work out is whether my test for the return flight has to be taken in Spain, or could be taken in the UK just before I leave, will still be within 72 hours of my return. Several phone calls to government helplines later, nobody seems to know the answer to that one.

But I have after several phone calls confirmed the answer to this next one, and it is ludicrous. 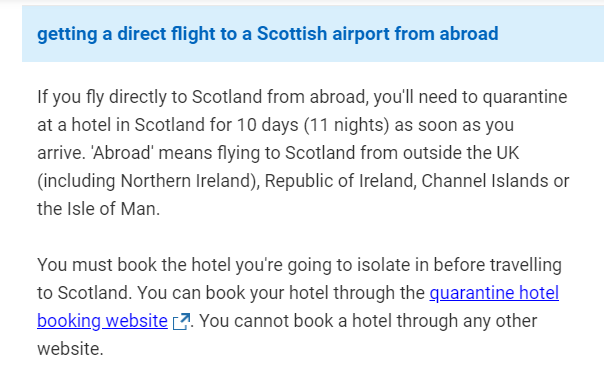 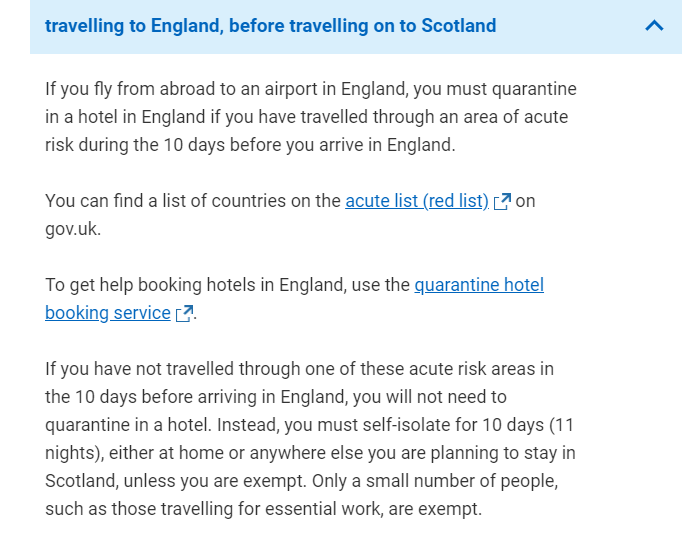 These daft rules have the full force of law, and fines of up to £10,000 for non-compliance. This nonsense is not the consequence of Scotland and England having different policies. It would still be possible for the Scottish government to have a logically consistent policy that is different. For example, they could decree that anyone flying direct into Scotland would have to enter a quarantine hotel and that anyone arriving in Scotland from England would have to enter a quarantine hotel who had been outside the Common Travel Area (England, Scotland, Wales and Ireland) in the past ten days.

I shall, however, take seriously the self-isolation at home obligation, from the point of view of protecting others. But it would be a very great deal better for virus protection if I could just move to self-isolation at home after the five mile trip between Edinburgh Airport and my home, rather than be forced into a 400 mile journey by public transport.