It is hard to envisage politics without lying, nowadays. A world where politicians are honest about facts, actions and motives appears an impossible aspiration. In general, the electorate seem now to accept this lying as priced in. I don’t think that anybody now doubts that Boris Johnson shagging Jennifer Arcuri led him to send public money and access her way, but the English electorate in particular show no sign of caring enough to alter a voting intention. Mind-boggling sums on Covid-related contracts for mates, or the entire crooked premiss of the Greensill public finance scam, appear similarly to have no effect.

The BBC care so little they did not report Ms Arcuri’s confession at all, save for Ian Hislop referencing on Have I Got News For You that the BBC did not report it. But only on the extended, late night edit of that programme, that nobody watches.

It is not generally sensible to try to analyse the Loyalists of Northern Ireland using criteria that refer to the use of logic, rational thought or any empirical knowledge established since the eighteenth century. But the riots in Belfast reflect, at least in part, that it is still possible that some people get upset if lied to.

Boris Johnson could have stated “To have no hard border with the Republic of Ireland is paramount. Therefore Brexit will necessitate the imposition of certain border checks of a technical nature which will be necessary at the Irish Sea. These cover veterinary and phyto-sanitary declarations and that sort of guff. They are a nuisance but not serious, and in no way reduce our commitment to the Union. They will be more than compensated for by new transport infrastructure, political initiatives and Treasury grants to Northern Ireland”. That would at least have had the benefit of being, mostly, honest. We will never know if it would have caused a violent reaction from unionists. (The question of who attended which funeral may be a trigger event, but is not a cause).

It is difficult for me to inhabit the mindset of a Northern Ireland loyalist; but if you are one, your allegiance to the British state is the most important factor in your life, besides immediate family considerations, and sometimes before them. To discover therefore that the British state which you worship has sold you out and told you a load of lies, must be disorienting. Particularly when you find that the truth is that the British government is much more worried about Northern Ireland’s links to Ireland than to the rest of the UK, and pretty relaxed about setting a path that is obviously – to everyone except, till now, you – leading to Irish reunification.

It must all be very horrible for loyalists who are abandoned by the state to which they wish to cling, and must feel their peculiar culture slowly dying. Hence the riots, which will make no difference.

Iain Macwhirter extrapolates from this situation to the English/Scottish border post-Independence. He is keen to point out that if Scotland is within the EU single market and England outside, there will have to be those non-tariff border restrictions and thus some border infrastructure and checks. That is undoubtedly true, but I am not quite sure why he thinks that is so terrifying. The loyalists in Belfast are not rioting because there is a practical shortage of quinoa and they are starving; they are rioting because of purely political dissociation.

Scotland will certainly need checks on the border with England; these will not be, as Macwhirter tries to make out, just “EU protectionism”, but are needed, to protect us against import from England of chlorine-washed chicken, genetically modified tomatoes, unsafe children’s toys, and whatever other delights the Tories promised bonfire of EU regulation will visit upon us.

I am normally a genuine fan of Macwhirter, but he makes the curious mistake of suggesting that Scotland after Independence would be in the same position as Northern Ireland now is, in relation to the UK and EU. Whereas of course Scotland would be in the same position that the Republic of Ireland now is, assuming it joined the EU or at least EFTA and the EEA. And there are no riots in Dublin. In fact, Brexit has brought to Ireland the advantage of more direct links to Europe bypassing England altogether, which have burgeoned at spectacular speed. 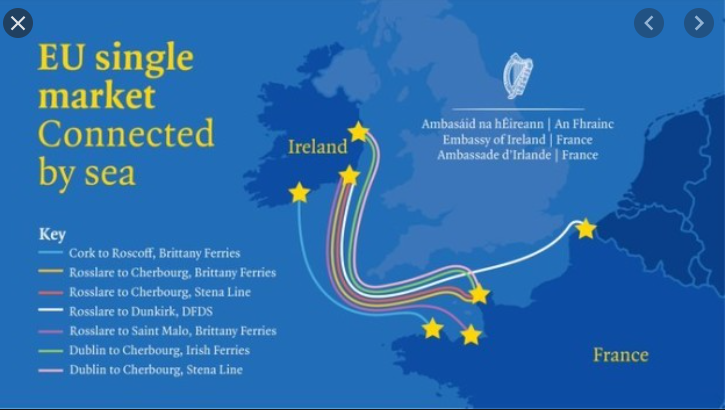 Precisely as Ireland has done, similar ferry routes for Scotland will massively mitigate any problems caused by what will be – and I happily shout it out – a very real border with England. What is alarming is that it is well within the powers of Holyrood to start work already on the necessary port infrastructure, but no planning on transport integration for Independent Scotland appears to be happening at all.

I have felt for fifty years that the A1 – incredibly still not even dual carriageway for much of its progress north of Newcastle – is the perfect symbol of lack of genuine enthusiasm for the union in the British body politic: as well we have the fact that no government has ever seriously considered a genuine high speed railway running from Inverness and Aberdeen to London, and onward through the Channel Tunnel. The UK now has less high speed rail than a substantial number of third world countries. The timidity of HS2, which may make it before I die to its ultimate goal of Leeds – just a quarter of the way north from London in the UK – shows that the union really does not deserve to survive.

Contrary to Macwhirter, I expect that Independence will in the event radically improve Scotland’s connectivity not just to the EU, but also to England. Even though we will have a border to keep out the dodgy stuff, and a good thing too.

128 thoughts on “Politics Without Lying”