Skip to content
Home » Posts » Uncategorized » On Being A Bit Wrong

I was down in London last week for discussions around my appeal to the Supreme Court, and staying in a hotel close to Leicester Square, I wandered along to see the fans during their game with Ukraine and its very noisy aftermath. I was hoping to write a piece about disgusting uncouth yobs of racist English nationalists and their stupid and perhaps violent excesses.

With the exception of the most hardline of unionists and the politically correct automatons of the “new” SNP, it is ingrained in most Scots to support two teams: Scotland, and whoever is playing England. This is generally expressed lightly, but the centuries of oppression and cultural and economic dominance that led to these attitudes are very real. I have been amusing myself greatly on twitter throughout the tournament by supporting the Czech Republic, Germany, Ukraine, any opponent of England, I confess largely because it creases me up to see unionists so easily triggered and unable to cope with teasing.

I know, I should get out more.

Well, I have to say I was wrong. I found it impossible to dislike the crowds of England supporters. They were joyous, and there was no sign I could find around Leicester or Trafalgar Squares of the kind of racist Brexit backers who had booed the England team for taking the knee. Indeed, the most striking thing about the crowd was its extreme multiculturalism, the most joyous and unified representation of most of the ethnic groupings on this earth, all with their arms around each other and sharing beer, wine, tequila, a variety of smokable substances, and anything else to hand.

There was also a far greater gender mix than I expected, and the women were by no means passive or in girlfriend mode. In fact some of the more aggressively uninhibited groups of celebrating young women were distinctly intimidating to an old fogey like me and had me scuttling to cover (they meant no harm but might have hugged me to death).

Yes, I know London is not Grimsby or the ex-red wall constituencies, I know English nationalism is a real problem and will split up the UK (about which I am intensely happy). But I was wrong to dismiss the Gareth Southgate phenomenon of an essentially decent Englishness and its reach. My loyalties for Euro 2020 (sic) now lie with the nation of my Italian grandmother. But I feel somewhat less revolted by the continuing success of the English team.

I should make my confession; I liked the English fans I was around that night.

I should be very grateful if you read this excellent article by Alexander Mercouris on my appeal to the Supreme Court. Alexander is a lawyer and it is an explanation of the detail, but it absolutely captures everything I have been lying awake at nights and thinking about the case.

I was chatting to Vivienne Westwood at a rally for Julian Assange and she is very taken with the climate crisis. We are heading for the edge of an abyss, and a few people in power are considering how to slow down a bit, while almost nobody is suggesting we turn round. Vivienne reminded me of her website Climate Revolution, which is very stimulating and worth checking for updates.

Vivienne often chooses to express her thought through her art and allegorical representation, and also writes cogently and pithily. The breadth and depth of her knowledge and quality of her thinking are impressive. For those not with a natural artistic bent, it is worth taking the time to understand. For example, she chose to celebrate Julian’s fiftieth birthday not by eating birthday cake but by smearing it on herself. It is a great piece of agitprop, and invites you to work out why.

Finally, here is a lovely picture of John Pilger, who was on great form, and me showing off my bald spot. 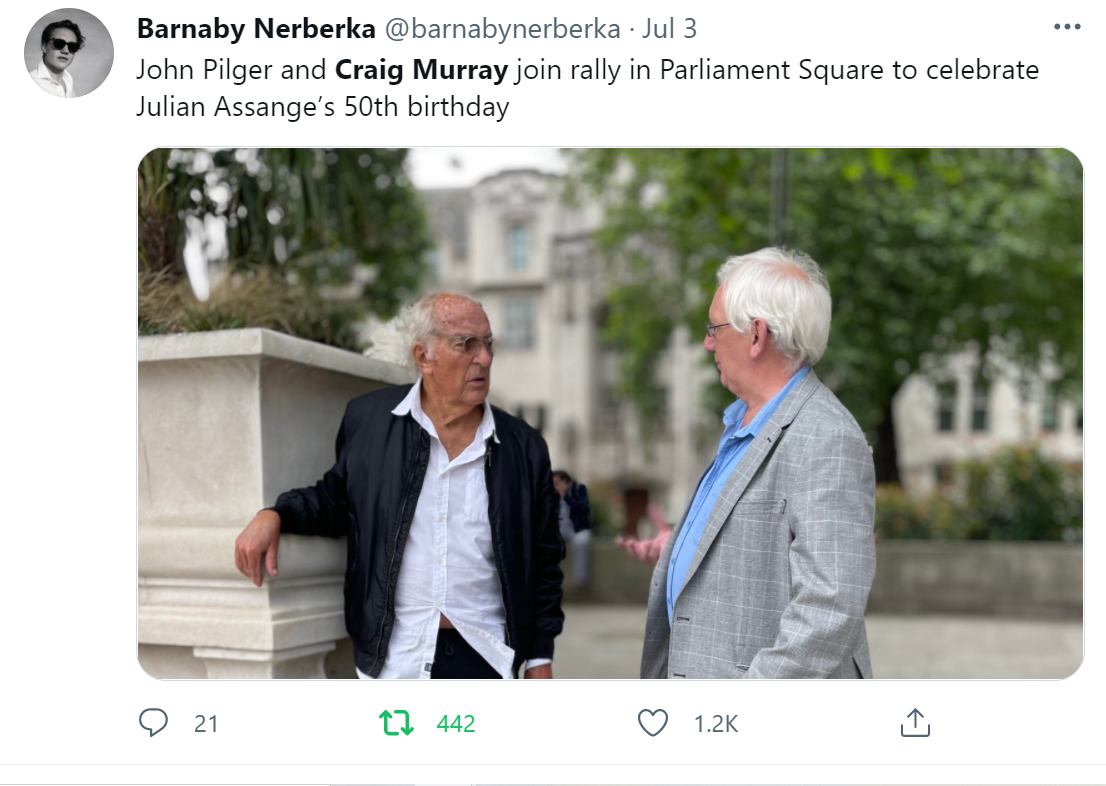