This picture has been all over twitter, promoted by every high level Blairite you can think of, from JK Rowling down. Yet all may not be what it seems. 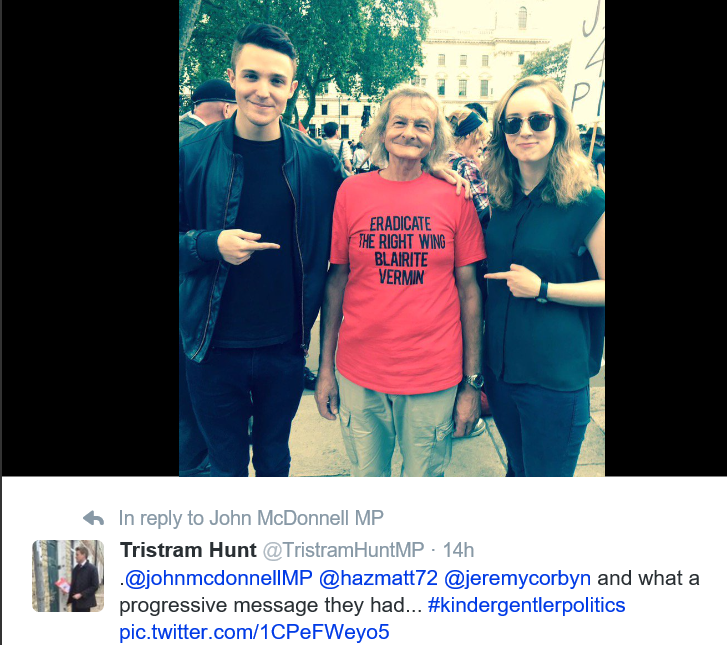 On the face of it, the old gentleman has a message on a T shirt which, while we might understand it is calling for the deselection of Blairite MPs, uses intemperate language which can be interpreted as an incitement to violence.

But look again at that photo. The body language of everybody involved is somewhat strange.

That is because the lady on the right is Anna Phillips, full time employee of the Blairite pressure group Progress.

While the gentleman on the left is Lewis Parker, a professional “creative strategist and social media Guru”. Now if you wanted someone to think up a stunt like this and then get millions of people on social media to see it via J K Rowling etc, ask yourself this question. Of all the thousands of professions in this world, which profession is the precise profession whose major task is to invent and set up stunts like this one? Why, a “social media professional”. Is it not an amazing coincidence that one just happened to be going past, as Ms Anna Phillips has explained it, on the way to the pub?

And this only the day after every mainstream media outlet ran as headline news that Jeremy Corbyn was heckled at the Pride rally by a man who happened to see him, who amazingly happened to be another professional PR man, Tom Mauchline, who happens to work for the Blair/Alastair Campbell PR firm Portland Communications.

I really do find myself astonished by the sheer amount of happenstance in life. Of course it cannot possibly be more than happenstance. Otherwise it might be characterised as conspiracy theory.

The T shirt worn by the elderly gentleman appears to be brand new, given the clarity of the lettering and depth of the colours. The gentleman may just have had it made himself, indeed, or have bought or been given it at the rally. The question arises of who produced it/them. Although, as a general rule, the production of advertising T shirts is probably a process more familiar to creative media consultants than to the rest of us.

I concede it is a possibility it is his own T shirt, worn of his own volition. I would admonish him for his excessively intemperate language.

But what is Lewis Parker doing with his arm round the old gentleman’s neck like that? If this is truly a fake befriending, that is abuse of the elderly. If it really is his own T-shirt, then that embrace and the knowing smirks and pointing are really very unpleasant indeed. In contrast to Parker, who appears to have borrowed that haircut from an international footballer, and the smirking Anna Phillips, the elderly gentleman’s physical appearance raises to my eyes a few causes for concern about his condition, which I certainly hope are misguided.

And remember, a fake befriending, including physical contact, of an elderly and apparently vulnerable person, while making fun of him for social media, is Parker and Phillips’ own explanation of what is happening here. That is the best case. There are obvious worst explanations of the kind of set-up this is.

And who was the cameraman? Serious question.

Polly Toynbee in the Guardian today seeks to embolden the Blairites to strike against Corbyn with the phrase “the party can’t go on denying their heartlands’ demand for migration curbs.” To berate Corbyn for being not sufficiently pro-EU, and at the same time not tough enough on immigration, is to demand a logical impossibility.

But Polly is certainly right that a tranche of anti-immigrant Labour supporters are against Corbyn. I could go out now and find one of the 170,000 Labour members who voted against Corbyn last time, who is a racist. Probably an elderly person. Out of 170,000 there will undoubtedly be some. I could pretend to be their friend, and then expose them as anti-immigrant and humiliate them on social media. I could take smirking photos of myself as I did it.

But what would it actually prove? Not all those Labour people against Corbyn are racists, just as few Corbyn supporters would use the language on that T shirt, though I assume the gentleman meant political rather than physical elimination.

We can all find an extreme example and play these stupid games. The difference is that Progress, other Blairites and their paid PR hacks have the mainstream media to amplify their faked efforts.

351 thoughts on “Another Media Setup?”