Online Tories are consoling themselves with two memes:

1) Michael Foot got huge crowds but lost in 1983, so Corbyn’s crowds mean nothing
2) Young people won’t turn out to vote

The parallels with 1983 have a certain validity. This is probably the first time since 1983 a genuine ideological choice has been put to the electorate in England and Wales. As a direct consequence of this, it is the first election since 1983 where the mainstream media has been effectively unanimous in extreme and naked bias against the leader of the Labour Party.

But there are important differences. An important and unexpected one is that, if we are considering crowd size, in 1983 the Tories could pull a big crowd too. Whatever her faults, and they were extreme, at least Thatcher was not a coward like May. She did open air street meetings and the passing public could get to them. Yes there were police around her, but it bore no relation to May’s constant hiding from the public. Do a google image search for “Margaret Thatcher 1983 crowds” and you will see what I mean. Thatcher could draw a crowd of supporters, without bussing them in or corralling workers in their workplace.

I had enormous respect for Michael Foot. His book The Politics of Paradise remains one of my favourites, and I once had the chance to discuss Byron with him. What the scoffers forget is that, prior to the Falklands War, Foot held very large opinion poll leads over Thatcher, consistently for two years. It was only the fit of extreme jingoism over the Falklands War, and the “Khaki election” Thatcher opportunistically called on the back of it, that caused Foot to lose.

The Tories have tried precisely the same trick on Corbyn that they tried on Foot; using jingoism against him. Indeed Paxman even referenced the Falklands War itself in his attack on Corbyn. But the world has moved on, and this simple imperialism does not have the pull with voters it did back in 1983.

To watch the Tory and mainstream media puzzlement that these attacks have not sunk Corbyn has been one of the joys of the last month.

But of course the biggest difference between now and 1983 is the existence of new media. Foot faced a very similar hostility from mainstream media, and public meetings, leaflets and local activists pounding the streets were all that he had to combat it. But now we have all those things plus social media. The impact of this cannot be over-estimated.

An article in Today’s Guardian shows that one blog, Another Angry Voice, is reaching more people online with its articles than the Independent and the Guardian, and that the Canary was in the same league as the two mainstream outlets.

I wondered how we do on this list, so I contacted the ranking company, Kaleida, and they replied that they had only analysed the sites the Guardian had asked them to. That makes the Guardian’s ethics pretty questionable in presenting a “top 25” when they had pre-determined who they were, but let that pass. Another Angry Voice is in any event excellent and to be commended on its achievement.

As is Wings over Scotland, which today published its readership figures for May: 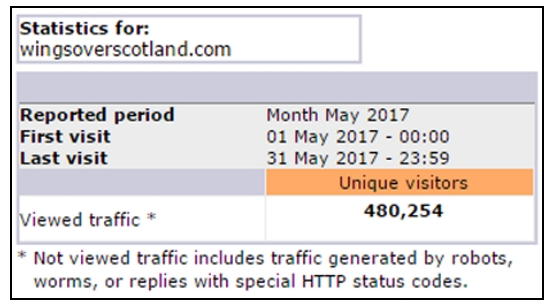 That is a very strong readership for effectively a one man, pro-SNP blog. Which is also a fair description of our blog, which has an even bigger readership than Wings. I downloaded the same analytics to get the exact comparable figure: 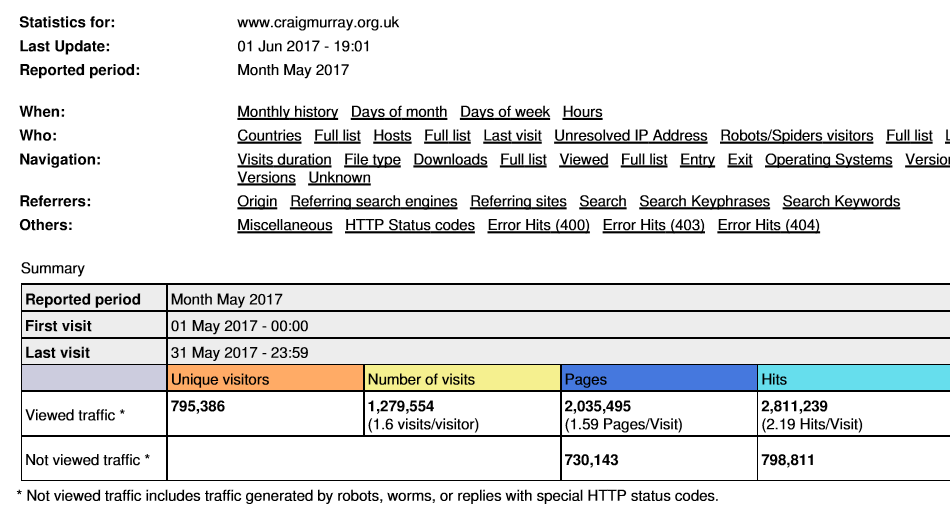 So this little blog is getting 800,000 unique viewers a month. Some individual posts have been getting 250,000 readers. You have to remember when looking at newspaper circulations that nobody reads an entire newspaper and individual articles get a fraction of the quoted total readership. That is why AAV is outdoing the Guardian and Independent in those rankings.

When you add together the efforts of Scottish Independence supporting sites like mine, Wings, Wee Ginger Dug, Bella Caledonia, Newsnet and scores of others, the readership really does run to millions. On a UK basis, if you look at Another Angry Voice, Pride’s Purge, the Canary and again scores of others, the anti-Tory forces are finally at a combined readership that genuinely can offer an alternative influence to mainstream media.

On twitter the dominance of the left is unquestioned, with Labour Eoin a whole national campaign by himself.

This campaigning combination of old fashioned flesh pressing and meetings, with a social media reaching out to millions on millions, is very potent indeed. I participated in precisely this combination of activities, and saw how it enabled us to increase support for Scottish Independence up from 28% to 45% in the course of the referendum campaign. I have now witnessed it shove back a massive Tory lead in this general election.

It is an astonishing fact that the Tory campaign has been pushed to the point of disintegration by this social activism, despite having the support of the mainstream media, to the extent it is often impossible to tell which is the “journalist” and which is the Tory politician.

If only Michael Foot had been able to fight with the weapons of social communication now at all our disposal, and the support of citizen journalists against the media billionaires.

Which of course is the answer to the second Tory meme – that the Tories will win as the young will not vote.

It is by now notorious that the difference between different opinion pollsters is down to the extent by which they allow for differing turnouts between age groups and social classes. Those still showing a substantial Tory lead, are assuming the young and the dispossessed will vote in very low numbers, as has been historically the case. Those showing Labour close to overtaking the Tories, are accepting people’s own description of their likelihood to vote.

Precisely the same factors apply in Scotland, where the Tory vote is again heavily concentrated in the older population. I strongly suspect that the much higher propensity of the elderly to vote Tory is likely to be matched by a much higher propensity of the elderly to get their information from the BBC and other mainstream media sources. I believe this is likely to be the primary cause of the truly startling age differential in voting intentions.

I exect the young and less affluent will now vote in greater numbers than usual in general elections because, for the first time in decades, there is a chance to vote for a real change that will make a positive difference to their lives. Historically they were unenthused because there was nothing to enthuse them. Only in Scotland was there a realistic chance for most people to elect somebody who was not simply a shade of Tory.

Now there is real choice and they are enthused, be it by Corbyn or by Independence, depending on location, and they will vote.