So a tiny independent radio station in Ireland managed to interview Robert Fisk on the ground in Douma, but none of the British mainstream broadcast media today has him on, despite the political fallout from our Syria bombing attacks being the main news story everywhere? Meantime MSM propagandists including Richard Hall (BBC), Dan Hodges (Mail) and Brian Whitaker (Guardian) and many more queue up to denounce Fisk on twitter from their cosy armchairs.

It bears repeating that the information on the alleged gas attacks – which raises great doubt but which Fisk himself does not claim as definitive – is not the most important part of Fisk’s article. The Hell of rule under the jihadists that we in the West are arming, funding, training, “military advising” and giving air support, alongside Saudi Arabia and Israel, is the indisputable and much more important element of Fisk’s report, as is the clear evidence he provides that the White Helmets are part of the jihadist factions.

To return to Scotland, I am sorry I shocked many of those who wish me well with the vehemence of my attack on Ian Blackford and the SNP for accepting MI6′ version of events, together with a renewed expression of my outrage at Nicola Sturgeon for having instantly supported Boris Johnson’s anti-Russian rhetoric over Salisbury without waiting for evidence.

My anger is not synthetic and there is a fundamental point here.

The question is this: whether Scotland wishes to become truly a different kind of state to the UK, or whether it is simply a case of a management buyout of the local NATO franchise. As the UK enters enthusiastically into a new cold war, that question is now a much sharper one.

The UK security services are Scotland’s enemy. The next effort at Independence is not going to look like 2014 – the British Establishment only allowed that because at the outset they did not believe there was a hope in Hell we could win. Now they are rattled. Our next effort at Independence will look much more like Catalonia. All the signs are that the current leadership of the SNP, who are so comfy having little chats with MI6 in their career break from investment banking, or who want to be an inclusive, unionist-friendly “Queen Mum” figure rather than campaign for Independence, do not have the stomach for the fight. What they do have is comfy, very highly paid, billets as a pocket of token opposition and diversity within the United Kingdom.

Nicola buying into the Johnson story of the new cold war is not a small thing. It is huge, momentous, epoch-defining in Scotland. And a fundamental betrayal of her voters. 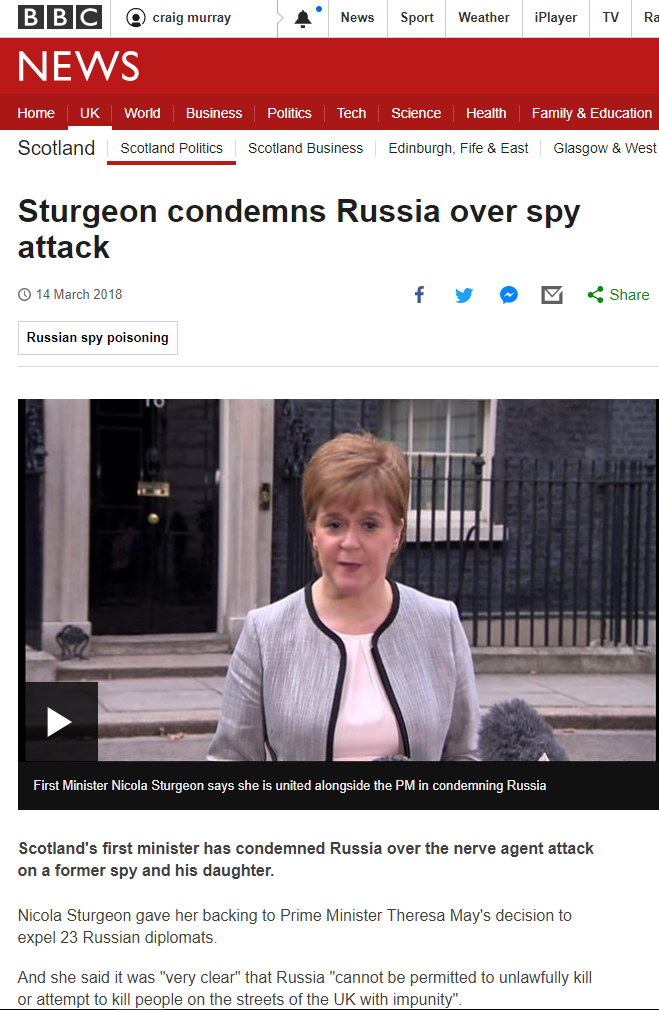 A Fully Paid Up Member of the British Establishment

In the next street to where I am writing was born the great James Connolly. He wrote:

When it is said that we ought to unite to protect our shores against the ‘foreign enemy’, I confess to be unable to follow that line of reasoning, as I know of no foreign enemy of this country except the British Government

Note the British government are the enemy – not in any way the people of England. Anybody who cannot repeat Connolly’s statement with conviction is only pretending to be part of the Scottish Independence movement, and will falter as soon as Westminster says no.

819 thoughts on “Living in Goebbels Land”