When Michael Crick embarrassed Theresa May by quizzing her on her non-existent opposition to apartheid as she visited Mandela’s old cell, the response of New Labour was to defend May by claiming the Tories had opposed apartheid all along. Progress and Labour Friends of Israel rushed immediately to the defence of the person they truly adore, who sits higher still in their Pantheon than Tony Blair and Gordon Brown. They rushed to defend the memory of Margaret Thatcher. 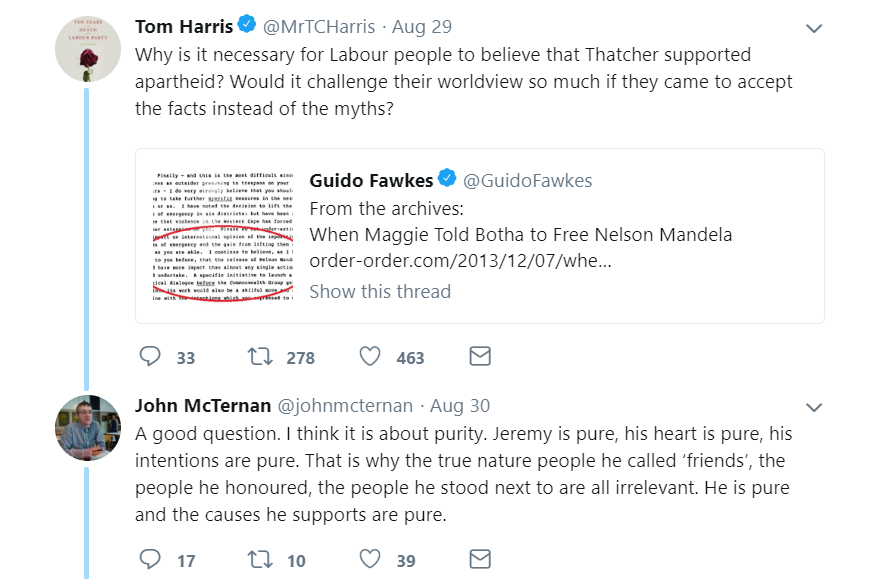 The person here quoted with approval is Paul Staines, aka Guido Fawkes, far right blogger who has stated that he never wore a “Hang Nelson Mandela” badge personally, but used to hang out with people who did. 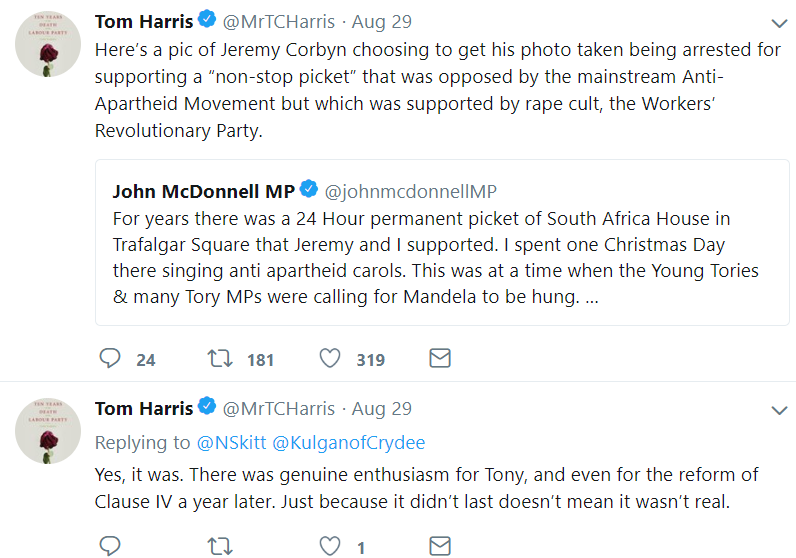 Blair-loving ex-MP Tom Harris went one further by claiming that Jeremy Corbyn’s own anti-apartheid opposition was connected to a “rape-cult”, a stupefying bit of “guilt by association” propaganda.

Here we have Liz Kendall supporter and occasional Guardian columnist Sarah Hayward – possibly the most obscure individual to get themselves a blue tick on Twitter, as though she were worth impersonating – making the absolutely ludicrous claim that when arrested, Corbyn was supporting Thatcher’s anti-apartheid policy.

I could go on, but for a last example here is Blairite house journal the New Statesman, pretending to wrap a scholarly respectability around the Thatcher revisionism. It is worth noting that the Blairites repeatedly call in evidence the claims by another right-wing Blairite and former Ambassador in Pretoria, Lord Renwick (who resigned from the Labour Whip when Blair ceased to be Prime Minister). Renwick wrote an entirely tendentious and self-serving book on his and Thatcher’s “role in ending apartheid”.

The truth is not hard to find. Professor Patrick Salmon, the FCO’s official historian, last year published the monumental volume of official documents “The Challenge of Apartheid”. It details with mounds of evidence Thatcher’s stern resistance to any sanctions against apartheid and, repeatedly, her insistence that the ANC was “a terrorist organisation”. Here is a quote from Salmon’s synthesis of Thatcher’s views from the official history (I can’t give a page number as I received the final draft, as standard FCO practice as I feature in the book, and I quote from the draft):

“Mrs Thatcher was relentlessly hostile to all those who sought to overthrow the apartheid regime by force or undermine it through economic sanctions. The ANC was unacceptable not only because of its association with communism… but above all because of its refusal to renounce the use of violence… which inevitably meant that she regarded it as a terrorist organisation of the same stamp as the PLO or the IRA. Mrs Thatcher adamantly opposed the imposition of further economic sanctions…

South Africa’s role as a bulwark of the West against Soviet expansion was not just a rhetorical ploy but was believed implicitly by Ronald Reagan as well as by Mrs Thatcher.”

I was, to my intense frustration, banned from communicating with the ANC. Professor Salmon details at great length the sharp disagreement between Thatcher and Geoffrey Howe, Malcolm Rifkind and Lynda Chalker over South Africa. There were indeed genuinely anti-apartheid Tories. But Thatcher was not one of them. All of her instincts on this were with the pro-Apartheid right of the party, as Salmon notes explicitly.

In real life, Thatcher was not a dictator. She had to carry her Cabinet with her. Her relationship with Howe in particular was crucial to her political base, as illustrated by the fact that he more than anybody precipitated her ultimate political downfall. It is true that Thatcher did in private meetings tell P W Botha to release Mandela – but that was at Howe’s insistence, not of her own volition.

Thatcher’s 1984 meeting with P W Botha at Chequers is worth noting. There was a massive demonstration against it, on which I took part just before joining the FCO, as did Jeremy Corbyn, Peter Hain and children of both Geoffrey Howe and our then Ambassador to South Africa. At this meeting Thatcher’s briefing provided by the FCO was to call for Mandela’s release. But she did not do so in the official meetings. A minute from her Private Secretary Charles Powell (brother of Blair’s Chief of Staff) claimed that Thatcher had pressed Botha to release Mandela in a private conversation over canapes with no witnesses. It is fair to say the nature of this “pressing”, if it happened, was ever after a subject of some scepticism in the FCO. If anyone knows what the South African records say…

For two years I, among other responsibilities, wrote briefings, speeches and parliamentary answers on South Africa, cleared them through FCO ministers before being sent over to No. 10, where they would get “toned down” by Charles Powell to reflect Thatcher’s views. I cherish my first ever conversation with Powell. I called Number 10 to discuss a draft, and asked;

“Hello, is that Charles Powell?”.
“Actually, it’s Pole”, he replied.
“Oh I am sorry”, I said in genuine innocence, “It’s spelt Powell in my directory”.

I had not yet got used to posh twats.

The truth is very easy to discover, and it is not what the Blairites now claim in their deluded Thatcher worship. Sir Patrick Wright, former Head of the Diplomatic Service, was absolutely correct in observing that Thatcher supported a “Whites-only” state:

It should be noted this comes from Patrick Wright’s diary written at the time, and not a subsequent self-serving account. I can confirm it is absolutely true, from my position as the South Africa (Political) desk officer 1984-6.

What Thatcher favoured was P W Botha’s “Bantustans” or “Homelands policy”, under which an ethnically defined, whites only state possessing all of South Africa’s wealthy cities and ports and the best mineral and agricultural resources, would exist alongside a number of impoverished “independent states” housing different tribes, from which a low paid workforce could commute daily to white areas (or live there temporarily under passes). That was the planned endgame of apartheid, and a number of such “states” were created – South Africa actually declared four “Bantustans” as independent countries. Thatcher hankered after their recognition, particularly Boputhatswana.

The “Homelands policy” is of course identical to the “two state solution” which the neo-cons propose for Palestine, with an apartheid ethnically defined Israel holding all the main resources next to impoverished pockets of Palestinians in an “independent state” commuting in to provide a cheap labour force.

Not only does Patrick Wright affirm in his diaries Thatcher’s support for the “Homelands Policy”, Professor Salmon confirms it too “Mrs Thatcher was talking about a return to pre-1910 South Africa, with a white mini-state partitioned from their neighbouring black states”.

Last year I published more on my recollections of my own role at that period.

As a final rebuke to Thatcher’s New Labour acolytes, I quote Peter Hain:

[Hain] criticised Norman Tebbit, a minister under Margaret Thatcher, and Charles Moore, her biographer, for trying to rewrite history.

“If Nelson Mandela can forgive his oppressors without forgetting their crimes, who am I not to do the same to our opponents in the long decades of the anti-apartheid struggle,” he added.

“But it really does stick in the craw when Lord Tebbit, Charles Moore and others similar tried over recent days to claim that their complicity with apartheid – and that’s what I think it was – somehow brought about its end. Even, to my utter incredulity, when Lord Tebbit told BBC World, in a debate with me, that they had brought about Mandela’s freedom. I know for a fact that Nelson Mandela did not think so.”

But there is a question here of great urgency today. Why do New Labour leap in to deny what Hain called the Tories “craven indulgence of apartheid”, to defend Margaret Thatcher and Theresa May, and to criticise Jeremy Corbyn for his anti-apartheid activity?

Together with reaction to the quitting the party of Frank Field, an open Thatcher and Enoch Powell reminder, I conclude that the Blairite MPs would prefer to be led by Margaret Thatcher or Theresa May than Jeremy Corbyn. Their psychology is deeply troubling: 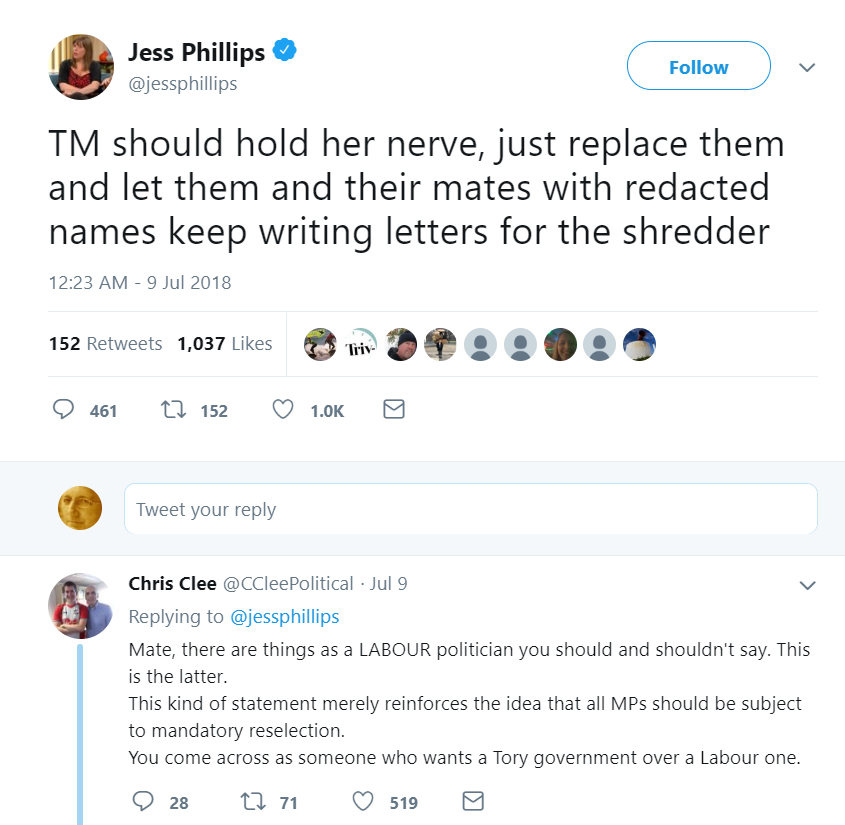 I support Scottish Independence, so I am in a different position to voters in England. But, despite the fact large numbers of my friends have joined the Labour Party to support Jeremy Corbyn, I could not vote Labour in most of England. Could I advise somebody to vote for Wes Streeting, John Mann, Jess Phillips, Stephen Kinnock or their ilk? No, under no circumstances.

Labour party members need to bite the bullet on reselection. Being a Labour MP cannot be a sinecure granted for life irrespective of behaviour. The party is plainly dysfunctional, and it is so because the large majority of MPs are totally removed from the views of the membership. There are only two ways to resolve this. Either the MPs will have to leave parliament or the members will have to leave the party. There is no coherent party at present.

The Blairite Labour MPs have painted themselves into a corner by their decision to brand Jeremy Corbyn as personally a racist and an anti-semite. If I was in a party led by a racist and anti-semite, I would leave the party. The idea that they can continue as members of parliament for the party while expressing such views about the leader is a nonsense. But they do not wish to leave, because they would lose their comfy jobs. All of the right wing Labour MPs realise they would never win an election on their own account, without Labour Party support. It would be hilarious if not so serious, that they claim Frank Field can resign the Labour whip but this does not mean leave the party, and that he must still be the Labour Party candidate at the next election!

Their hope is twofold. Firstly, that the charges of anti-semitism against Corbyn will be widely believed and lead to a drastic drop in public support which will force Corbyn out. This is not happening. The public realise that the charges of anti-semitism are false and based on a definition of the word which simply means critic of Israel. Other than the normal polling malaise which follows any split in a party, there is no drastic plunge in support for Labour of the kind which would definitely follow if the public thought the party were led by an anti-semite.

To put it another way, either 40% of the public are anti-semites, or the public do not take these accusations seriously.

The Blairites other hope is that, by the Labour Party adopting the IHRA’s malicious definition of anti-semitism as embracing criticism of Israel, they will manage through legal action to force Jeremy Corbyn’s expulsion from the Labour Party. This attempt to use the British Establishment to circumvent party democracy is extraordinary.

By bringing things to this pitch, the Blairites have made compromise impossible. Either Corbyn and most of the members will have to go, or the Blairite MPs will.

Something must give. That is why I urge everybody who is in the Labour Party to take action today to push for mandatory reselection of MPs. The matter is urgent, and no party can resist the united force of its members for long.

Subscriptions to keep this blog going are gratefully received. It will always be free to view and free to copy and reuse articles anywhere. I do not have advertising or sponsorship or backing from any organisation or person. Much less than 1% of readers give financial support so yours will help – select a sum from the dropdown box, from £2 a month. No particular level of output is guaranteed as there is just one of me writing and researching and I am only human!