The headline from the major new Ashcroft poll of Scottish public opinion is that Independence now has 52-48 majority support, and that is excellent news. Ashcroft himself is a Machiavellian Tory but his polling effort involves much larger samples than regular newspaper polls and has a generally good record. For me, the most interesting point in his new Scottish poll is that fully 40% of Scottish Labour voters in 2017 now support Independence.

This has important repercussions. The Labour leadership will no longer be able to portray Independence as beyond the pale for decent thinking people, or to portray Scottish nationalism as akin to Viktor Orban, without alienating a huge swathe of its own support. It certainly ought, at the very least, to encourage the Labour Party in supporting the Scottish people’s right to a new referendum, against Tory attempts to block it.

But it also has ramifications for how the SNP and wider Yes movement conduct ourselves, particularly online. Nationalists must stop automatically writing off Labour supporters as unionists. There remains a Blairite rump still powerful in Scottish Labour who are rightfully despised, but we need more readily to acknowledge how much we have in common with a great many ordinary members of the Labour Party, both in terms of supporting Independence and in terms of the more socially inclusive Scottish state we wish to build. 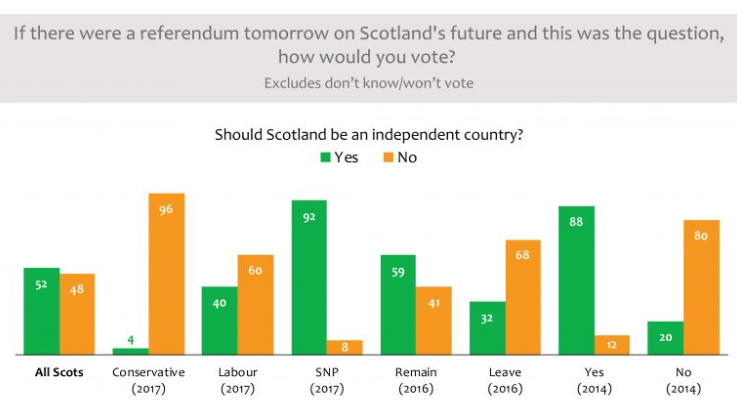 The dates in brackets indicate that the affiliation refers to how people voted in the election or referendum of that date.

It is not surprising that many more Labour voters are looking to Scottish Independence as a reaction to a historically extreme right wing government in London. But as I blogged at the time, already in 2017 25% of Scottish Labour voters supported Independence and a significant number who had voted SNP in the 2015 General Election had reverted to Labour in the 2017 General Election. The reason for this was simple – the SNP showed little sign of pushing on with Independence anyway and our dreadful, lacklustre 2017 GE campaign was conducted entirely on the basis of “don’t mention Independence and deny we are pushing for it whenever the Tories bring it up.” No wonder some Indy supporters drifted away.

As ever I looked to the estimable James Kelly for his interpretation of the latest poll, and found that I had beaten him to it. I did however find his last article touching on precisely the subject of whether the SNP should put Independence at the forefront of their campaign in the likely event of an early General Election. As James puts it:

“But we’ve all heard the mood music from the SNP leadership: in a snap pre-Brexit election, they’re more likely to emphasise their plan to stop Brexit, albeit with a pledge to hold an independence referendum.”

I too have picked up that mood music, and I have also picked up the massive groundswell of discontent with it. The SNP must put Independence right at the forefront of a general election campaign, and I entirely endorse the Angus MacNeil option of declaring the general election a de facto Independence referendum if the Tories persist in their refusal to countenance a formal one.

For the SNP yet again to put Independence on the backburner and to lead their campaign on Brexit would be a massive mistake. Firstly the surest way for Scotland to remain in the EU is to become an Independent country. It might end up with more SNP MPs at Westminster, but for those of us whose object is to have Scotland out of the UK and no SNP MPs at Westminster at all, the SNP is looking more and more like an organisation over-interested in its own institutional strength and in highly paid UK jobs for its highheidyins.

In short, Tommy Sheppard’s brilliant 2015 quote “We came to Westminster to settle up, not to settle in” is in danger of turning Tommy – for whom I have high regard – into a liar if they don’t rediscover the sense of urgency that quote conveyed.

The SNP seems to have its heart set on being heroes on the UK stage and beloved of the Guardian and Alastair Campbell by thwarting Brexit for the UK. Well, bugger that. I want to destroy the UK and I want Scottish Independence. The rest is detail.

Whether England remains or leaves the EU is a decision for the residents of England, not for me.

Thirdly, an all out bid for Independence will attract back to voting SNP many of those Independence supporting 40% of Scottish Labour voters, many of whom voted SNP in 2015 but not 2017. I can see no especial reason they should change their vote if the SNP does not look a great deal more serious about Independence than it does today.

Finally, if you can’t achieve Independence while Boris Johnson and his bunch of ghouls are lurking around No. 10, when can you? Forget waiting for a better time.

If the SNP fails to strike all out for Independence now, and gets further distracted by the effort to stop Brexit for the whole UK, I shall not be alone in wondering how many of the 8% of SNP voters in the Ashcroft poll who do not support Independence, are at or near the top of the party.