In what we think is a world first, the Lord Advocate of Scotland is claiming in the contempt of court case against me that I am legally responsible for the content of replies to my tweets.

The claim is founded on an argument that when you tweet, there is a menu which enables you to hide replies. If you do not hide a reply, you are therefore the publisher of that reply. As the Lord Advocate is putting it:

2. That the Twitter account under profile name @CraigMurrayOrg is operated by the Respondent. When the user of such an account publishes a post on Twitter, there is an option for readers to post publicly available comments in relation to each post and to reply to other readers’ comments. Replies to original posts will appear on the timeline of the author of the original post and on the timeline of the author of the reply. The user of the account who published the original cannot delete comments by others but, since November 2019, has the option to hide replies to their original post. 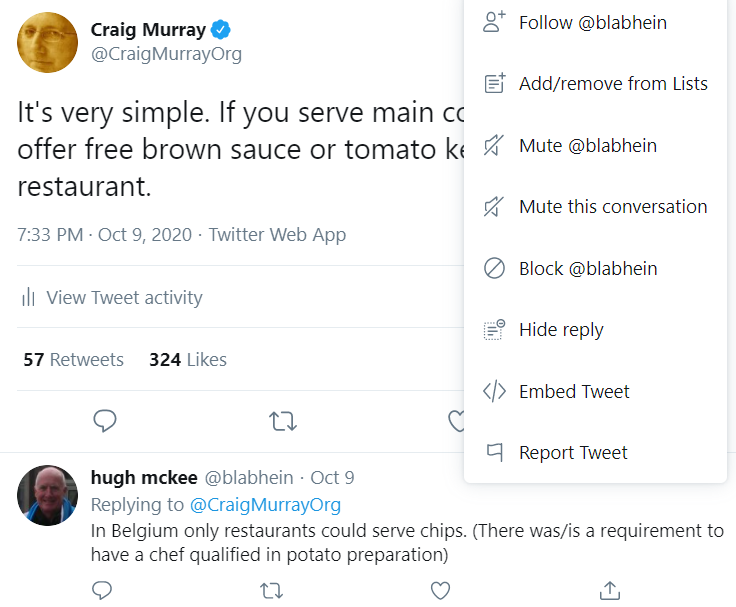 Note this is a very different argument to the accepted principle that if you publish a defamatory or otherwise illegal tweet, you bear a responsibility for people retweeting or passing on the information.

What the Lord Advocate is saying is that you can post a perfectly legal tweet, but you are responsible for any illegal replies. So if you post “Joe’s Fish and Chips are Great”, and somebody replies “But old Joe is a paedophile”, you become the publisher of the reply and liable in law for it (presumably unless you hide it, but that has not been stated in terms). The Lord Advocate is arguing that the reason that this has not previously been the law is that it is a new situation, with the “hide reply” option only being added in November 2019.

The reason this argument is being made is that the Crown is struggling to prove I published anything illegal myself, but believes a reply to one of my tweets is more obviously illegal.

The situation on Twitter is very different to a blog or media website. This website is mine. It is registered to me, I am the publisher and I accept responsibility for its content. Even there, however, the law on comments is much more nuanced than people realise and I am not generally liable for comments unless there was something in the content of my original post that was illegal or encouraged illegality, given that reasonable arrangements for moderation are in place.

The Lord Advocate’s approach would have a massive chilling effect on Twitter and fundamentally change its nature. When you tweet there is an option to limit who can reply. People would be loathe to allow replies at all if they were liable in law for what other people might say. Nobody wants to have to be constantly checking replies to their tweets, including to old tweets, in case somebody – who may be somebody you never heard of – tweeted something illegal.

For good or ill, Twitter has become a major medium of social and political debate. That dialogue would be entirely changed if replies are routinely turned off. What troubles me is that, in stretching for a way to convict me, the Lord Advocate appears completely oblivious to the very wide consequences of this argument for free speech. The Lord Advocate is of course not only Scotland’s chief prosecutor, he is also a member of the Scottish Government, appointed by the First Minister.

I cannot help but put this together with the Hate Crime Bill, which was condemned as an attack on free speech by every reputable body you can possibly imagine, and conclude that Scottish Government has no concern whatsoever for the concept of freedom of speech. It simply does not feature in their internal thinking, and is of no concern unless hammered upon them from outside.

The doctrine that Twitter users are the legal publishers of replies to their tweets has massive implications were it to succeed in court. That it should be recklessly resorted to as part of this vindictive attack on me, shows how deep down the rabbit hole we are going.

Unlike our adversaries including the Integrity Initiative, the 77th Brigade, the Atlantic Council and hundreds of other warmongering propaganda operations, this blog has no source of state, corporate or institutional finance whatsoever. It runs entirely on voluntary subscriptions from its readers – many of whom do not necessarily agree with the every article, but welcome the alternative voice, insider information and debate.